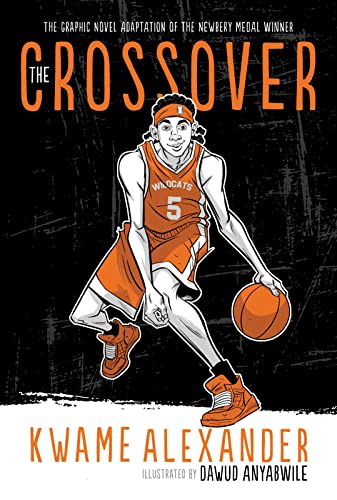 Kwame Alexander packs a lot into the story of identical twins, Josh and JB, both serious basketball players trying to live up to their father's glorious past in the sport. The writing is vivid, sometimes reading like rap, other times like the voice of a young teen, both thoroughly compelling. Josh is the narrator, but the story is as much his brother's as his own and both of their personalities come to life through the words and pictures.

The rivalry between the twins is effectively described and we see how the brothers are different—and what they share. “My twin brother is a baller. The only thing he loves more than basketball is betting. If it's ninety degrees outside and the sky is cloudless, he will bet you that it's going to rain. It's funny and sometimes annoying.”

Interspersed with the narrative, beautifully drawn by Anyabwile, are their father's rules of the game, such as “Basketball Rule #3: Never let anyone lower your goals. Others' expectations of you are determined by their limitations of life. The sky is your limit, sons. Always shoot for the sun and you will shine.”

The dad's status is dramatically shown when a cop pulls over their car for a broken taillight on the way to an important game for Josh. The reader holds their breath, expecting the usual police brutality against black men, especially when it turns out that the father has left his license at home by mistake.

“At 5:37: Dad says, Look, sir, my name is Chuck Bell. And I'm just trying to get my boy to his basketball game. At 5:47: While coach leads the Wildcats in team prayer, I pray Dad won't get arrested. At 5:48: the cop smiles after verifying Dad's identity on Google and says, you 'Da man.' At 5:50: Dad autographs a Krispy Kreme napkin for the officer and gets a warning for his broken taillight.” What better demonstration of fame could there be?

The book packs a lot in, taking several unpredictable twists and turns. JB gets a girlfriend, Josh is suspended from the team for slamming a ball into his brother's face (by accident), and darkest of all, Dad has a heart attack.

No spoilers here, but this a book about so much more than basketball. It's about competition, goals, resilience, family, about the values that parents pass on to their children. This is a graphic novel for people who don't like graphic novels, a sports book for readers who don't like sports books. It's a strong story that breaks through genres, well told through a magical combination of words and pictures.