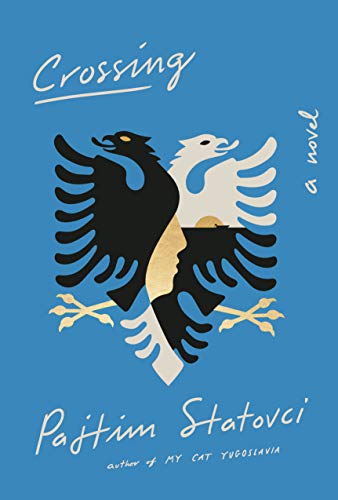 “Crossing is a challenging and brilliant work of fiction.”

Despite its modest length, Crossing is nothing less than the tale of human existence: of how we construct ourselves, how that changes as we try to fit ourselves to the changing world around us, and the price we pay. Pajtim Statovci’s narrator is unique only in their mutability (“their,” not “he” or “she,” for reasons that will become clear). The novel’s structure, with its shifts in time and place and point of view and a narrator of whose identity we are often uncertain, underscores the point: identity is slippery.

Crossing tells two stories. The first begins in Tirana, Albania, in 1985, five years after the death of its long-time Communist dictator, Enver Hoxha. The country is collapsing. Two 14-year-old boys, Bujar and Agim, run away from home to make a life together. Bujar leaves behind a family devastated by his father’s death. Agim, a brilliant boy who prefers to dress like a girl, is escaping his father’s brutality. Theirs is no Huck Finn bucolic idyll but a tale of desperation and survival. Agim encourages Bujar even as they starve in the streets of Tirana. “Poverty is a state of mind,” he says but, when they are reduced to begging, they learn people “feel empathy only toward people who are like them.”

In the port city of Durres, they work odd jobs to raise money to leave Albania for Italy. There, also, they become lovers. When Bujar tells Agim he is not a “peder,” or gay, Agim replied neither is he because, “A girl can’t be a peder.”

Discharged from a psychiatric hospital after the suicide attempt, the narrator drifts to Berlin, Madrid, New York and Helsinki. They slip in and out of genders and ethnicity and fabricate a new personal history at each stop in their wandering—claiming to be a female Bosnian medical student in Berlin, a male Italian émigré in Madrid, a female Spanish actress in New York, and a Turkish transgender woman in Helsinki. “Nobody has to be the person they were born,” the narrator proclaims, “we can put ourselves together like a jigsaw.”

The narrator’s story of crossings, however, is not a trickster’s tale; it’s a melancholy account of displacement and disappointment. For, while the narrator’s mutability is a source of freedom—“This is my greatest quality, the game of dress up that I can start and stop whenever it suits me”—they also realize, “I mean nothing to other people, I am nobody and this is like death itself. If death were a sensation, it would be this: invisibility, living your life in ill-fitting clothes, walking in shoes that pinch.”

This description of spiritual desolation points to the novel’s larger theme. Unlike the atavistic Albania of the narrator’s birth, patriarchal, impoverished, fed by legends, and trapped in ancient enmities, the inhabitants of the affluent West are free to construct themselves, but the price of freedom is anonymity and isolation. The crossing from one identity to another requires the constant abandonment of who and what you were and living largely in a state of flux—what Buddhists call a bardo, the disorienting and rootless interval between one life and the next in the unending cycle of reincarnation.

The identity of the narrator who has taken the reader on this journey, and its relationship to the story of Bujar and Agim, is disclosed only at the end of the novel where a final lesson is also passed on: For a changeling there is no home, no place of return. Crossing is a challenging and brilliant work of fiction.