The Crocodile and the Dentist 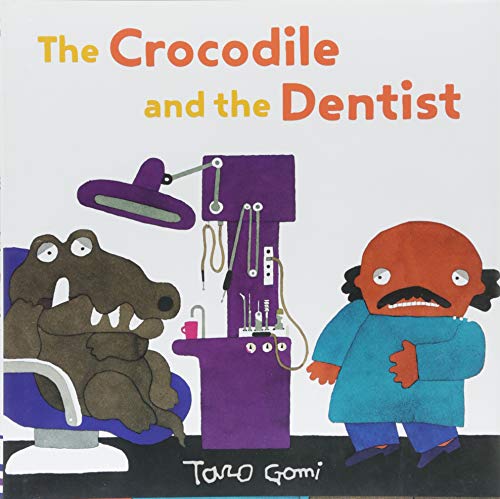 This colorful book, The Crocodile and the Dentist, has only 128 words in it, and many of them are repeated. First the crocodile says he is afraid. Then the dentist repeats it. Neither one of them wants to meet, but Crocodile has a toothache, and the dentist needs to work. The story is reminiscent of William Steig’s book, Dr. DeSoto, where the dentist is a mouse, and the patient is a fox. They, too, were scared of one another when the book was first published in 1982.

This will be a fun read for small children who will easily memorize the words after a reading or two. “Must I?” “Must I?” “I’m scared.” “I’m scared.” The back and forth echoing goes on for several page spreads. When the dentist gets his arm stuck in the crocodile’s teeth, and the dentist tests the painful tooth, they both say, “Ouch!”

Each spread shows the dentist working on the sore tooth, first with a drill, then a sharp tool, then some filling, until the dentist is done and the crocodile is relieved.

The story ends with each thanking the other and saying, “See you again next year.” Then the page turn reveals them each saying, “I don’t want to see him again.”

What dentist wouldn’t want this book in his or her waiting room? Wait! Maybe it’s a book to read after the filling is filled, not before, There are too many ouches and references to pain for a skittish patient.

The end papers are cleverly done in pink toothbrushes with white bristles on a navy background. The art is simple and somewhat primitive with big bold colors and lots of white space. The eyes are expressive and changing but also matching in the two characters from spread to spread. The story certainly tells both sides of this interaction, which is what makes the book work. Readers can fell empathy for the crocodile patient and the human dentist.

The book seems so simple, but it is a whole episode of being afraid, going to the dentist, being brave, and getting done what needs to be done. It is trusting another, and also being wary. It is success at an unpleasant task, told from two perspectives. Every library needs a copy.

To all the kids and crocodiles out there: happy brushing!