Cro-Magnon: How the Ice Age Gave Birth to the First Modern Humans 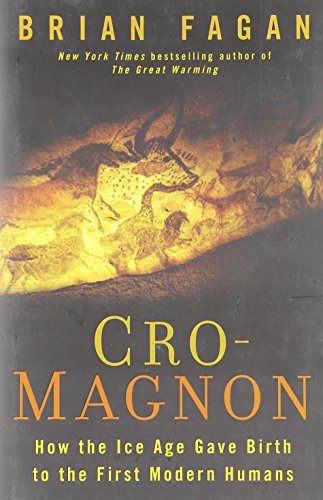 By any standards, Brian Fagan is a leading authority on archaeology, and, with 46 books on the subject to his credit, he is among the world’s leading popularizers of the field. In Cro-Magnon, he gives us an easily digested round-up of what is known about the pre-history of modern humans in Europe.

Fagan presents an essentially chronological account, starting with the Neanderthals who were already present in Europe when modern humans arrived, and taking a brief detour to look at the evolution of hominids in Africa. From the arrival of Cro-Magnons around 45,000 years ago until the spread of farming in Europe, about 8,000 years ago, the book traces the movements and developing cultures of these people who were the first homo sapiens to settle the continent. It has a good index and an extensive list of further reading in the Notes section.

If you live in Europe, or are of European descent, then the Cro-Magnons were almost certainly your direct ancestors. Fagan digests and presents for us the extremely complex evidence that reveals population movements and social conditions, without burdening us with details or much controversy. This evidence is mostly archaeological—the bones, human and animal, that were left behind, the stone tools, the excavations, and the paintings and carvings. But he also makes much use of climatological data, studies of modern and recent stone-age peoples, and recent genetic studies, again, sparing us the arguments and supplying only the conclusions.

Fagan works in a field that is massively interpretative. Controversies abound—especially in the assessment of purely social, spiritual, or linguistic aspects of ancient peoples. Yet this reviewer thinks it is a strength of his approach that he delivers what he feels is the most likely interpretation, given a broad, eclectic, yet conservative, summary of the data from many disciplines, merely indicating where there may still be some disagreement among experts. It allows him to present an extended and coherent narrative that makes sense of the whole story of Cro-Magnon settlement in Europe.

And the way he tells it, it was a long, hard struggle. Europe, for most of the time that Cro-Magnons carved out a place there, was a bitterly cold, hostile environment, more akin to Northern Siberia or Canada than to the temperate land we know today. Frozen tundra and barren steppes were what greeted those first immigrants. Yet the Neanderthals had survived there for nearly 200,000 years when we arrived. It is typical of Fagan's non-controversial approach that he doesn't indulge in lurid speculation about how modern humans drove the Neanderthals to extinction. It was a slow and gradual process that took place over many thousands of years. In Fagan's view the Neanderthals simply continued to live their lives as they always had, only, with Cro-Magnons hunting the same territories, times just grew harder, until their already-marginal existence was gradually pushed beyond the brink.

Yet, while the absence of detail such as the minutiae of debates about dating and statistical analyses allows Fagan to present the bigger picture with bold strokes, it also leaves you wondering about some of his assertions. He is, for example, very firm on what was men's work and what was women's work. How much of that is in the actual evidence, and how much is imported from modern anthropological studies, or even modern prejudices? And the speculations about whether Neanderthals danced seem fanciful and based on slender evidence (which appears, from what is said, also to be consistent with the hypothesis that they wrestled).

And it isn't as if there was no room for more detail or more discussion. The book proceeds at the painfully slow pace of a modern TV documentary, with considerable repetition and often tedious dramatizations of life in the late Ice Age. The material in the book could have been presented in perhaps a quarter of the number of pages if not for the slow, repetitious style. The book proceeds at a measured pace, to put it kindly, and, while clearly written, the language used is often clichéd and itself repetitive. (There were several points where I thought if I read the words “bestiary” or “tool kit” one more time, I would throw the book down and jump on it.) Which is disappointing because there are sections—like the discussion of Cro-Magnon art near the end—where Fagan writes with fascination and insight. If the whole book had been like that, it would have been such a joy to read. As it was, the book provides a clear, pain-free summary of what is known about the earliest Europeans—it just happens to be a bit slow.

It is a sign of the rate of change in this field that, even as Cro-Magnon comes to press, DNA analysis of a finger bone found in a southern Siberian cave suggests that a third hominin species may have co-existed with Cro-Magnons and Neanderthals in that region. How would the presence of another human line affect the conclusions in Cro-Magnon? Only future editions will tell.