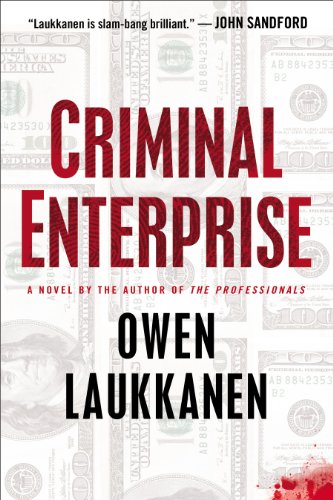 “If you’ve ever wanted to write a terrific crime novel, Criminal Enterprise could well be the blueprint.”

From the outside, Carter Tomlin’s life looks like the perfect American Dream: a beautiful wife and kids, a large swanky house on a tree lined street, great neighbors—the works. But the dream morphs into a nightmare—all because Mister Redundancy has come knocking at Tomlin’s door.

So what do you do when you find yourself unemployed from your well-paid job and the possibility of your comfortable lifestyle coming to a disastrous end? Rob a bank, of course. At least that’s the solution Tomlin comes up with to ease the pressure he suddenly finds himself under.

His first bank job is more on impulse than planned, at a Bank of America branch in Midway. It comes a few months after he is let go. He’s been waiting to talk to a loan officer to help him with the mortgage and other mounting bills. Instead, inexplicably he leaves the bank without talking to anyone, crosses the parking lot to the local Walmart, and buys a dodgy looking disguise before returning briskly to the bank and handing a scribbled note to a terrified bank teller.

Not exactly the crime of the century, but to his amazement, it works, and he quickly exits the bank, only this time with an envelope full of cash in his shaking hands, and adrenalin pumping through his veins.

The money in the envelope by most bank robberies is a pittance—eighteen hundred dollars—barely enough to pay the mortgage, so he decides he has no other choice. The bank will have to be robbed again. This time, however, he feels much calmer, more confident. The second visit nets him three thousand dollars, but it also adds something to his psyche: so pure a rush of power he can barely breathe.

Before long however, Carter Tomlin acquires a penchant for violence. No longer satisfied with just the money, he begins thriving on seeing the fear in the eyes of hapless bank employees. Up to now, he has never used a gun, preferring to bluff his way with threats, but soon decides that if he wants a bigger jackpot, a gun is needed. Seeing an ad in a local paper from a gun dealer, he hopes to secure a weapon without too many questions asked.

Despite the seller—Tony Schultz—having a dubious history with regards the boundaries of the law, he still asks Tomlin for some form of photo identification. Knowing his ID will inevitably lead the police to him, Tomlin takes the gun by force after badly beating the big man, something that will have unforeseen and tragic consequences down the line for Tomlin and for those near and dear to him.

Now that he’s armed, Tomlin’s deadly addiction of obtaining money by force is about to begin as he takes down bank after bank. Unfortunately for him, the serial bank robbing has now come up on the FBI radar, watched by no other than Special Agent Carla Windermere, one of the FBI’s most determined agents.

Before long, after meeting him face-to-face and sensing something just not right about the man with the perfect life, Windermere begins homing in on Tomlin. With her ever-trusted instincts, Tomlin quickly becomes her prime suspect.

With little help or belief from her boss and partner, Windermere quickly turns to the one person she believes can help her, the one person she can trust fully: Minnesota state investigator Kirk Stevens. The two law enforcers haven’t talked since they first worked together on the Arthur Pender case, a case that made them into minor celebrities.

With Stevens and Windermere teamed and ready to tighten their grip on the serial bank robber, Tomlin’s luck surely can’t deteriorate further? Wrong. Here comes Tony Schultz, and he sure as hell ain’t smiling. . . .

Criminal Enterprise is a fast-paced story told in tighly wrought chapters of three and four pages accomplishing what most writers need ten to twenty pages to accomplish, all thanks to Mr. Laukkanen’s gift of words.

Windermere and Stevens (first seen in The Professionals) are a terrific duo with just the right amount of forbidden sexual chemistry established between them. If you’ve ever wanted to write a terrific crime novel, Criminal Enterprise could well be the blueprint—one of those rare books you just know that as soon as you finish it, you can’t wait to reread it.