Criminal That I Am 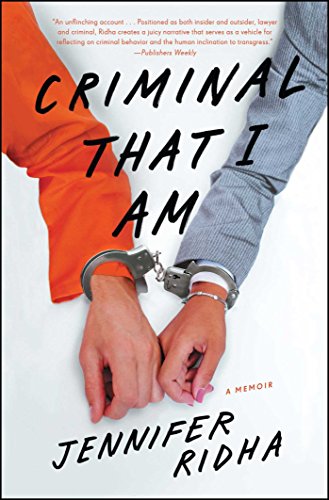 In Criminal That I Am, author Jennifer Ridha chronicles a criminal act she committed while serving as the attorney for Cameron Douglas, wayward son of the actor Michael Douglas. Though Ridha was a talented, esteemed member of the legal profession, this memoir delineates a self-inflicted nightmare that may reach beyond the comprehension of some readers.

Contrary to her legal prowess and dedication to a code of ethics, seemingly overnight she made a reckless decision that set this nightmare in motion. Casting aside all logical thought or consideration of the consequences, she forged a path that was tantamount to professional suicide.

Ridha first met Cameron Douglas (who she commonly refers to as “my coconspirator”) in 2009 while serving as part of his legal team on a drug charge. She describes his demeanor as “masculine but also childlike, alluring but also endearing.”

Ridha quickly became aware of the many paradoxes in Cameron’s life. Born to privilege and an acting legacy via his grandfather Kirk Douglas and famous father Michael, Cameron didn’t exhibit any signs of the Hollywood royal heritage surrounding him. Though he had been privy to regal homes and a privileged lifestyle, he spent much of his life “locked in a room with a needle in his arm.”

His rough exterior including myriad tattoos was off putting at first but in her heart of hearts she realized that Cameron was a fascinating enigma. But no one would have suspected (least of all her) that these two people would explore their connection on a deeper level.

After his family gave him a choice of drug rehab or flying solo, Cameron used his in-depth knowledge of the drug trade and expanded his activities to include drug trafficking, thereby delving even deeper into the dark side. Prior to meeting Cameron, Ridha’s life was the opposite, defined as the epitome of “rigorous rules and copious planning.” His life basically had “no framework at all.” He existed “entirely outside the lines.” While the chemistry building between them was inexplicable, it was palpable nonetheless.

Eventually their conversations evolved from legal matters to personal matters, and her visits and increasingly frequent phone calls became a regular part of both their lives. For a while she fooled herself into believing that her interest is born solely out of dedication to her client’s welfare. But eventually she had to face the reality that she had developed romantic feelings for Cameron.

As she explains her growing attraction to her client the irrational becomes obvious. “I find that I would rather spend time with him than with anyone else. Our dysfunctional exchange of needs creates a thick rope of codependency.”

Facing the impending threat of a protracted sentence, Ridha convinced Cameron to serve as what is known as a “cooperator”(aka an informant) to help the government’s case against others. In exchange, his time behind bars would be reduced. This role could place his life in jeopardy as a result of prisoner retaliation and coupled with this knowledge, his emotions began to deteriorate into a downward spiral of anxiety and fear.

The medication he was placed on to counteract his increasing symptoms caused a severe reaction. In an effort to quell his discomfort, Ridha agrees to smuggle in some Xanax pills to Cameron in prison. This one act was the beginning of the end of this talented lawyer’s position in the legal community. As she got in deeper, her life began to unravel fairly quickly. Apparently, Cameron had shared the drugs with fellow inmates and the word quickly spread as to their source.

As her crime becomes public knowledge, in the ensuing aftermath she admits, “I embark upon a quest for complete numbness.” She barely left the house and remained in bed for long periods of time.

She is clearly feeling defeated when she states, “The more I tell others that I’m standing on solid ground, the more events transpire to shake my foundation, and, in turn, the more I fear that my crimes come to define my life.” And further down this tumultuous road, “I ask alongside everyone else: How could she be so stupid? How could she be so wrong?”

Criminal That I am is a gripping read, as fascinating as it is shocking. It is a searing look into how otherwise upstanding individuals can lose all rational perspective as a result of an emotional entanglement gone awry.

Though it is a definite page-turner, there is one ingredient that is omitted from Criminal That I Am that might have cemented all the pieces of the puzzle in order to paint a clearer picture of the reasons behind Cameron’s criminal acts. There is very little mention of Cameron’s famous lineage and the familial relationships that may have enhanced the reader’s comprehension of how the roles in these significant relationships influenced Cameron’s choices and his outlook on life.