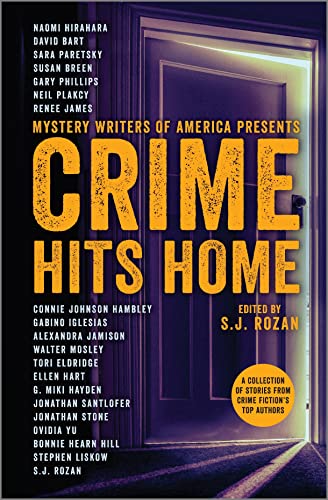 “Crime Hits Home is a worthy addition to every crime fiction fan’s bookshelf.”

A good short story anthology is like a buffet, offering readers an enticing assortment of dishes—some spicy, some sweet, and others a little bitter just for contrast.

Well-known mystery author S. J. Rozan has assembled a remarkably varied spread in Crime Hits Home, a presentation of the Mystery Writers of America, while tying each story together with a central theme: What happens when crime impacts your neighborhood, your family, your home?

As with any anthology, the resulting collection is somewhat uneven. Overall, though, Rozan has done an excellent job combining offerings from well-known authors with others from writers who may not be quite as familiar to the general reading public.

In the latter case, some of the stories are good enough to create a sense of name recognition that will send us out there looking for more from them. In other instances, well, perhaps one taste will be enough, thank you.

Among the selections from the most familiar authors included by Rozan, Sara Paretsky’s story “Little House in the Big Woods” stands out. An unusual tale about a woman troubled by the disappearance of two people in her past who strongly influenced her at the time, it wraps a melancholic atmosphere around a strong central character.

Perhaps even better, though, is “The World’s Oldest Living Detective” by David Bart, who may be less familiar to readers gravitating more toward novels and not aware of his many short pieces published in Alfred Hitchcock Mystery Magazine and Ellery Queen Mystery Magazine. The story of an elderly former homicide detective and private investigator who relives his most upsetting case while solving the mystery of a cat that has disappeared from his retirement home, this one’s charming, amusing, and definitely memorable.

Other contributions, on the other hand, strike a very different note. Walter Mosely, for example, remains true to his dark, depressing noir tendencies in “Not Exit,” while Naomi Hirahara tells a sad story about anti-Japanese racism among children in the book’s lead-off spot with “Grand Garden.” Neil Plakcy’s “Oyster Creek,” the tale of a homecoming with a hard-nosed ending, also takes readers to a very dark place.

Our survey of editor Rozan’s spread wouldn’t be complete without mentioning “Currents” by Connie Johnson Hambley. The atmospheric and entertaining story of two assassins facing off against each other on a desert island in the Pacific, it’s an example of how an anthology like this one can bring our attention to an author whose fiction will bear closer examination in the future.

A columnist for Bloomberg BusinessWeek, Hambley has also independently published three thrillers in her Jessica Trilogy, including The Charity (2012), The Troubles (2015), and The Wake (2017). Her contribution to this anthology casts light on her current work, as it were, and encourages us to keep an eye out for what might be coming next.

Overall, Crime Hits Home is a worthy addition to every crime fiction fan’s bookshelf. While a few of the selections miss the mark, others play well to editor Rozan’s chosen theme and will keep us thinking about them long afterward.