Crime Does Not Pay Archives Volume 10 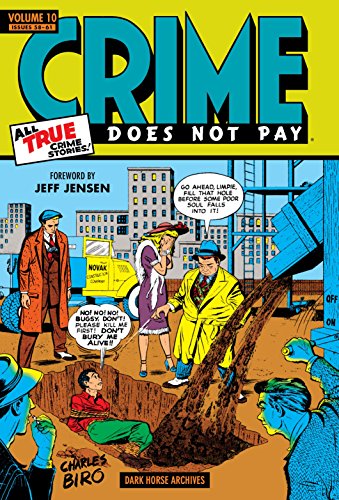 Crime Does Not Pay was a periodical comic book series that was published from 1942 to 1955 by Lev Grossman Publications. This volume is part of a re-release series by Dark Horse Archives and compiles issues 58–61 into one handy hardcover.

The foreword by Jeff Jensen helps bring historical context to over the top, sensational, gratuitous, and downright exploitative subjects within the comic books’ pages; however, it becomes rather obvious that Jensen has a specific bias when it comes to interpreting the mood of the times when the comics were first published. Instead of adding new insight into the history of these books, what the industry was truly like, or the fact that the vast majority of comics in those days were strictly commercial in nature, he seems to focus on the misogyny and the exploitation of women in the stories. While Jensen is correct in the fact that the stories of Crime Does Not Pay show women in a horrible light, he puts way too much emphasis on the social ramifications of this subject instead of stating the obvious: It sold books.

And that was what a periodical like Crime Does Not Pay was all about without exception: selling copies of comic books by using the most sensational story lines they could come up with and calling them “All True Crime Stories!”

One interesting historical fact to note, which piggybacks on the frankly commercial nature of the comics, is that while the majority of the stories within the volume have artist attributions, many of the writers from those days are either forgotten, never received credit when originally published, or were the same person or persons writing as stock writers and weren’t entitled to author credit due to their contracts.

Also, the stories being billed as “true” crime shows how Lev Grossman Publications obviously wanted to give the comics more of a reporting the truth feel instead of a sensational piece of fiction feel (which they obviously were). The lurid truth sells, then and now.

Yet the best part of this volume isn’t the modern commentary or the sensational stories themselves, but the look back at the past with the ads, quizzes, PSAs, contests, and other goodies that were included in the original publications. Instead of filtering out “Rare Army Patch Free” or “Genuine Army Air Force Helmet,” this volume reproduces the comics as they were originally seen on the stands and in the spinner racks.

The reader gets full pages of “America’s Greatest Zipper Billfold Bargain!” and “Here’s the Jacket You’ve Wanted At a Sensational Savings!” advertisements. Ads for cigarettes, toy cars, skin care, lamps, baseball biographies, point and shoot cameras, correspondence courses, and bodybuilding are all included. It makes the assertion that comics, even back then, were aimed solely at kids seem downright ridiculous. Not many eight year olds would have been thrilled to find an advertisement for a sports and leisure smoking jacket. They would have skipped right past it to get to the juicy tale of murder and revenge on the next page.

Crime Does Not Pay: Volume 10 is an excellent window into the past of an industry that has weathered some hard times, but, as seen by today’s rapid growth into movies and television, has proven to be a solid part of America’s literary expressions, as much as novels or the short story.