Creation: Art Since the Beginning 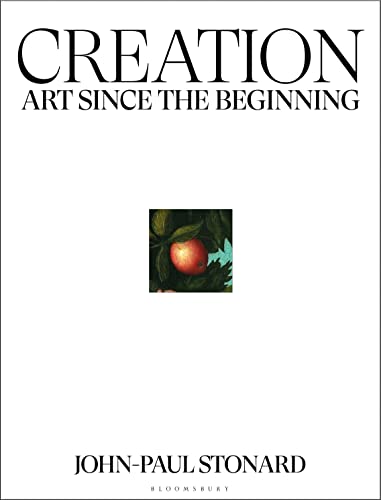 “Why do humans make images?” John-Paul Stonard might as well be asking why do humans breathe, eat, walk, or talk. Because we need to? Because we can? Because we do? Prehistoric humans, as much as people in this very day and age, took in their surroundings and expressed a reaction in some way, shape or form. It’s innate. It’s natural. It’s human.

Creation takes this almost laughably simple question and launches a global quest through art history to tell the story of, or maybe more accurately the motivation behind, image making. Still stubbornly anchored in Western art history, Stonard does make unusual detours to other regions of the world in order to prove the point that humans in all places and times share the same image-making instincts. Eschewing the how questions and embracing the why, he actually traveled on-location and took in these sights for himself.

Stonard’s process traces the lineage of human-kind’s encounters with nature. “Works of art,” he claims, “have always been a record of the human encounter with nature. They show how we think and relate to the world . . .” Wherever and whenever a human has made an image, nature is somehow involved. From this view of nature as muse, Stonard marks the major shifts in subject matter, artistic styles, technologies, cultural dynamics, and popular trends as the art historically significant images continuously evolve and artists come and go.

Starting where else: from the beginning, which calculates to approximately 40,000 years ago. Carved mammoth tusks, cave paintings, and clay sculptures give some evidence that humans put marks on materials a very long time ago. Stonard does an admirable job in embracing the humanity of cave painters, falling just shy of calling them artists but recognizing the presence of the same thread of inspiration and motivation that makes a person want to make an imprint.

The dangerous thing about these early Creation chapters is the amount of pure speculation that Stonard engages in. After describing the image he sees, he ventures off into the imagination, guessing at what these people were “struggling” with; what they were “obsessed” with; what they were “gaining knowledge” about; what they tried to “memorize”; even claiming that they were, “Evolving a capacity to think in terms of images . . .” His flamboyant poetic use of drama and extraneous extrapolation nearly discredits his thesis.

His thesis, again, is: nature. The prehistoric artifacts all have animals as their subject matter. Therefore, prehistoric people’s lives centered around animals. Yes, but. Any logic professor would find this an invalid argument on several fallacious grounds: post hoc, ergo proctor hoc. Just because the surviving art of caveman times features animals, this does not require that caveman lives centered around animals.

Once we move into the eras in which more artifacts have survived, the subject matter of the images shifts, and we see more variety. Once humans start recording their thoughts and ideas behind their image making, we no longer need to speculate. Conclusions become more solid and Stonard, gratefully, quits projecting.

To Stonard’s credit, his writing is smooth and easy. His thick book reads much better than our old clunky art history textbooks. One thing Stonard does very well is provide a more direct comparison with themes within the same time span. For instance, as something was occurring in Mesopotamia, something else was also springing up in Egypt. Or as Rome was rising in power, Buddhism was beginning to proliferate in the East. As Christianity was emerging in Byzantium splendor, Quetzalcoatl was uniting Mesoamerica. He keeps track of what is happening where and consistently reminds the reader of where they are in the thick of things as empires rise and fall.

Stonard distills history down to a few essential elements and then fits image making into the distillation. The pattern he uses is to recap the general historical situation, summarize the previous use of image-making based on three or four individuals, and then pick out the top three artists that represent a change to the previous norm like so: Traditional image—catalyst event, modern image—acceptance of modern image that now becomes the traditional image until the next catalyst emerges. Rinse and repeat for a few thousand years.

Also in Stonard’s favor is that he cuts the discussion around the 1980s to avoid a scuffle with anything contemporary. Leaving off with Jean Dubuffet. An interesting choice because Dubuffet comes full circle back to our prehistoric friends in his art brut style of cave-like images. Why did Dubuffet utilize this design in this style? “Because he chose to do so.” Thus capping the final chapter with a Jean-Paul Sartre quote (perhaps the Jean-Pauls share an existential meeting of the minds). Which about sums up why humans make anything: because they want to!

Even with the volume of pages we digest, Creation is still a beginner’s guide to art history. Its use as a 101 textbook is debatable. Its conclusion is basic. What it lacks in this area are learning tools such as maps, timelines, and resources for further inquiry. For the diehard art history geek though, it is good to take a look.