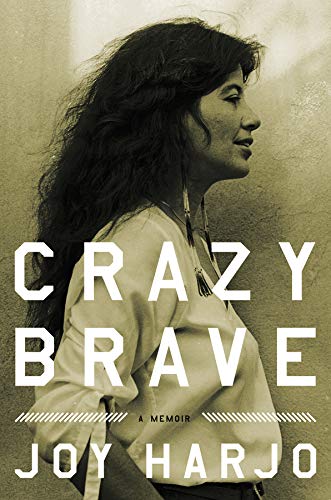 Joy Harjo has written a memoir as graceful and lovely as the artist herself.

The book limns the earliest parts of her life through her early 20s as she grew up in Oklahoma, nurtured her muses at the Institute of American Indian Arts and the University of New Mexico, gave birth to two children, and mothered three. It is a tale of difficulty and struggle with only occasional periods of respite. The title derives from the name Harjo, meaning “crazy brave.”

What distinguishes this volume from most memoirs are the author’s shifts into metaphor, dream, and poesy. They form a lovely collage of image—the fragments apt echoes of the moments she describes. Their presence not only heightens Ms. Harjo’s description but also denotes the inspirations for several of her famed poems.

There’s plenty of pain here, both in Joy’s immediate family and in her nexus of Native community. And after the extended description of her stepfather’s abuse, I felt overcome by sadness and the vivid sense of being trapped by a predator, and tabled the book for several days.

When I came back to it, I remembered that some of our most moving art derives from its creators’ deepest wounds, via the openings that give wisdom when pain forces one to seek it. And that shrouds of darkness have their seasons, which flow but also ebb.

Like the ache of a Patsy Cline song, the prose often reflects a bittersweet quality. “My mother would sing along with Patsy as my father would take his keys out of his jacket and hold open the door for her. He’d carry a fifth from the bootlegger next door. He’d take a swig while my mother gave instructions to the babysitter. I remember whimpering because I knew that the magic of beauty is dangerous. It is easily taken apart and destroyed. I had seen it happen other times when my parents came home, bringing the party with them. I had seen her dresses ripped. I had seen the jewelry and lipsticks scattered and broken by my father’s rage.”

Crazy Brave’s subtlety and brevity can belie the richness within its pages. The book touches on so many facets of growing up creative, sensitive, impoverished, yet having the vision to see into a future that will hold fulfillment.

It is indeed Ms. Harjo’s ability to presage such transcendence that carries her through times of abuse, fear, and great despair. Given her acute suffering, it would have been easy for her to succumb.

She writes, “A palm reader would tell me in the Eighties that in the palm of my left hand exists an alternate lifeline. In that line was a girl of sixteen or seventeen. She was dead of a drug overdose on the street of a California city.”

While Crazy Brave is not overtly political in tone, it does do a fine job of illustrating the toll that marginalization has taken on the Indian nation, which has gone from being 100% of the American population to 1.2%.

Many have been lost to drink and tuberculosis, which Ms. Harjo links to internalized sorrow. While explicit indictments are not her style, she reminds us of the degree to which alcoholism and domestic violence have scarred our Native populations.

The only real flaw in this rich torte of a book is that it ends too soon, prior to most of the successes Ms. Harjo has known in her creative life. I wanted to hear more about her writing process and her journey in taking up musical performance at the age of 40—about the ways in which she has contextualized and transcended the difficulties of her past.

Looking forward to the rest to come.

Heidi Utz is a writer and editor. Her work has appeared in numerous publications, including Outside magazine, NPR.org, and E: The Environmental Magazine, and many regional periodicals. She is coauthor of the book Montezuma: The Castle in the West.