The Crash Detectives: Investigating the World's Most Mysterious Air Disasters 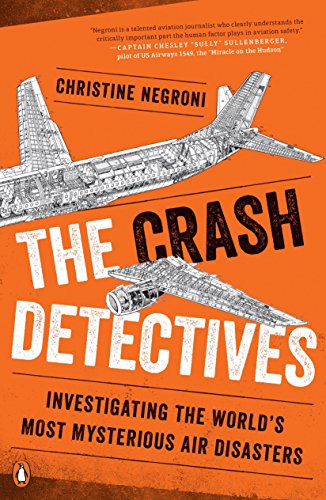 “Christine Negroni uses her experience and broad knowledge of air disasters to summarize and integrate investigations.”

Malaysia Airlines flight 370 was supposed to fly from Kuala Lumpur to Beijing. On March 8, 2014, the modern Boeing 777 jetliner disappeared, and no one knows what happened to it. The pilots made their last radio transmissions to an air traffic controller at 1:19 a.m., and did not indicate that anything was amiss. ACARS (the Aircraft Communications Addressing and Reporting System) sent an automatic message by satellite to the airline that everything was well.

But when the pilot was supposed to change his transponder code to the four digits assigned by Ho Chi Minh Center, the plane’s transponder went silent. Passive military radar showed the plane beginning a slow turn back to Malaysia, perhaps toward Penang. Then it turned slightly north, and was last seen on that radar west of Thailand. The ACARS broadcasts indicate that the plane flew for another six hours, south (again) to the Indian Ocean.

One piece of the plane washed up on Reunion Island more than a year later. Other than that, no trace has been found.

In The Crash Detectives: Investigating the World’s Most Mysterious Air Disasters, Christine Negroni offers her thesis on why the plane did what it did. Supporting her arguments with a plethora of evidence from other air disasters, Negroni explains some of the clues we have by presuming that the copilot was responding (alone) to a depressurization emergency. Incapacitation of the pilots explains other observations that do not make much sense. And some of the mystery (why ACARS went silent and then rebooted a half hour later) is not explained at all.

One might think that a state-of-the-art airplane gone missing is unique, but it has happened before. A Pan Am flight was lost with all aboard in 1938, and no trace was ever found. The Martin 130 flying boat was a technological wonder for its time, though today anyone’s smart phone would make several jobs on The Hawaii Clipper redundant. One can only guess what happened to it, and many have done just that—guessed—in the intervening 78 years. Author Negroni summarizes the literature of those guesses, and compares them to explanations for MH370.

Other air mysteries, such as the crash of UN Secretary Dag Hammarskjold’s plane in Africa in 1961 (“on a dark night”) remain unsolved. No one can explain convincingly the long delay between discovery of the crashed plane and the arrival of rescuers. One man survived what seemed to be recoverable injuries, only to die in the hospital. Bodies were found in the wreckage with bullet wounds. There have been several investigations, but none have provided satisfying answers.

Perhaps the most disturbing story concerns the coverup of why Air New Zealand flight 901 flew into a mountain in Antarctica in 1977. Someone at the airline altered the data for a waypoint by 2 degrees of latitude on the airplane’s navigation system, and the pilots did not know about it. They flew blind into the side of Mount Erebus, and then the airline sabotaged the accident investigation to hide its culpability. Airline representatives stole documentation from the crash site and from a pilot’s home. The transcript of the cockpit voice recorder was edited and revised by Air New Zealand employees. The first official report blamed the pilots.

Although a Royal Commission of Inquiry, led by a respected jurist, found that Air New Zealand executives had engaged in "an orchestrated litany of lies," no charges were brought against anyone in the airline. And to this day the airline disputes the findings of the Commission.

In a final section, Negroni covers accidents that were likely caused by the design of a rudder servo in Boeing 737s, and she argues that despite the trend of increasing automation and computerization in new jetliners, pilot skill and human ingenuity are all the more valuable in responding to emergencies. (Captain Chesley “Sully” Sullenberger wrote a blurb for the book cover).

Christine Negroni covered aviation for many news outlets after reporting on TWA 800 for CNN. She wrote a book on that mysterious midair explosion south of Long Island. Then she joined an aviation law firm directing investigations. Her career path might explain why the prose in her book is serviceable, though at times it is a bit surprising that a former journalist does not captivate the reader more fully.

Crash Detectives is strewn with footnotes explaining (for example) that Elizabethville is today Lubumbashi, that the Republic of the Congo is now the Democratic Republic of the Congo, that Northern Rhodesia is currently called Zambia, that Malaysian Airlines no longer flies the Boeing 747, and that BOAC is currently known as British Airways. It is as if Negroni wrote this book as part of a legal brief, and expected to be cross-examined on the minutiae. But if she will be tried, it will be by a jury of readers seeking accuracy in the book’s title. Crash Detectives has nothing to do with crash detectives, or how they go about conducting their investigations.

In the August 5, 1996 issue of The New Yorker, Jonathan Harr published his fascinating, well crafted, beautifully researched, and skillfully written article “The Crash Detectives.” It is an engaging story of people who investigate air crashes for the NTSB (National Transportation Safety Board), their methods, and the ways various investigations are organized.

It is everything that the book under review is not. The New Yorker piece has a narrative structure, a wealth of information, original reporting, and it is about precisely what its title says it is about.

Christine Negroni uses her experience and broad knowledge of air disasters to summarize and integrate investigations. But The Crash Detectives is not for readers who are interested in the subject promised by its title.

David E. Spiro wrote this review on an American Airlines flight from Tucson. On the same flight a few years ago he survived an inflight depressurization. He is Adjunct Associate Professor of International Political Economy at Columbia University and a management consultant with The Strategy Practice. A private pilot for 27 years, he is the author of The Hidden Hand of Hegemony (Cornell University Press).