Crap: A History of Cheap Stuff in America 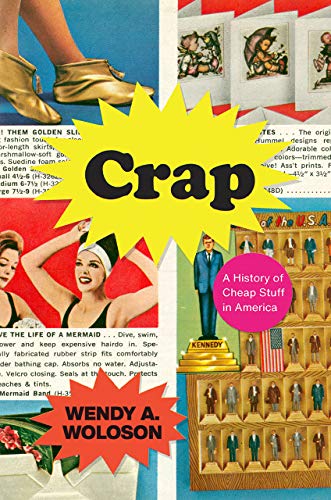 The “encrappification” of America dates back centuries, writes Rutgers University historian Wendy A. Woloson. And it has created “a material world of ephemeral, disposable, and largely meaningless goods.”

You know what she means.

“Crap is everywhere and transcends clear boundaries of category and genre,” writes the author.

Since the beginning of the consumer revolution in the mid-1700s, crap has been available from peddlers and pitchmen, variety stores, gift shops, clubs, magazines, and mail-order catalogues. It has been sold in five-and-dime and Dollar stores, and, for the upscale, at Hammacher Schlemmer.

“For better and worse, crap epitomizes who Americans are as individuals and as a society,” says Woloson. While great fun, her book is a serious, lively, and brightly illustrated account of cheap commodities and how they have been marketed, sold, and consumed.

Why do we crave novelties and souvenir spoons? Are we being duped by salesmen and marketers? Or do we enjoy giving ourselves over to the new-fangled?

Writes the author: “Understanding how advertising and marketing strategies have been deployed to sell crap over time reveals much about Americans’ emotional selves—not just our deep-seated desires, needs, anxieties, and passions but how these individual impulses and foibles have created a certain kind of national character. . . . Crap] offers in material form an intellectual history of ordinary people.”

One thing is certain, she says. We Americans always want more. Even if it’s more of the cheap, shoddy, ephemeral, and often useless stuff that clutters our lives. As kids we want the latest toy or Jack Webb police whistle from cereal boxes. As adults, we collect plates, figurines, and untold other thingies.

Much of our crap has come from overseas. Colonial America was flooded with crap from England. Much later, Japan and mainland China would churn out goods for Dollar General, Family Dollar, and other retail outlets.

By the late 19th century, gadgets had become “an integral part” of American life. Modest, often useless domestic devices “gave consumers a sense of agency,” writes Woloson. “Whether they believed in gadgets’ outrageous claims or not, Americans remained bedazzled by the transformative actions promised by so many combination tools, miracle face masks, and electro-galvanic belts.” An endless stream of affordable goodies “enabled Americans to buy what they really wanted, which was perpetual optimism.”

By the 1940s, there was a Gadget-of-the-Month Club, and so many kitchen tools were being marketed for women that Good Housekeeping had to review them outside the magazine in separate pamphlets.

Woloson is especially good on Americans’ “willing gullibility” when product salesmen engage in “magic, showmanship, and pseudo-scientific marketing” to bedazzle customers. She devotes separate chapters to commemorative collecting and giftware. Of the latter, she notes that world wars and cultural shifts never phased consumers who identified with items that were by turns “quaint,” “primitive,” “distinctive,” and “refined.”

A tireless researcher, she has rummaged through the American attic to write Crap, and offers enough clippings and photos of gadgets and whatnot to make her book a nostalgic romp.

Over the years, manufacturers always hyped the value of their wares. Woloson quotes one advertising copywriter’s account of the marketing of “The Official Bethlehem Christmas Plate,” limited edition, promoted as “actually fired in the Holy Land,” and verified by a supposed Greek clergyman in Bethlehem with an “exotic and religious-y” name.

As with most crap, the claim that “quantities are limited” only intensified the urgency to buy.