A Covert Action: Reagan, the CIA, and the Cold War Struggle in Poland 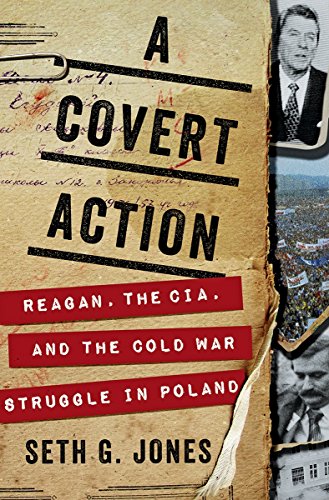 If there are any remaining doubts about the central role played by Ronald Reagan in the unraveling of the Soviet empire, Seth Jones’ riveting new book A Covert Action should dispel them.

Jones, the Harold Brown Chair at the Center for Strategic and International Studies, focuses on a CIA covert program formally approved by President Reagan on November 4, 1982, codenamed “QRHELPFUL,” that sought to sustain the Polish union Solidarity during the imposition of martial law by Polish leader Wojciech Jaruzelski.

Jones notes that QRHELPFUL was one element—perhaps the most important element—of Reagan’s grand strategy to end the Cold War peacefully. It was a grand strategy that sought to exploit the vulnerabilities of Soviet rule in Eastern Europe and ultimately in Russia itself.

Reagan hinted at the grand strategy in public speeches wherein he characterized communism as a sad, bizarre chapter in human history that was coming to an end. Reagan publicly predicted that the West would not contain communism, it would transcend it.

Privately in his diary as early as December 1981, Reagan explained that the struggle between Solidarity and the Soviet satellite regime in Poland “may be the last chance in our lifetime to see a change in the Soviet Empire’s colonial policy re Eastern Europe.”

Poland was the linchpin of the U.S. effort at undermining Soviet power. A CIA analysis stated: “Poland presents the USSR with the most threatening and complex challenge to its vital interests to emerge in the postwar period.”

During previous major rumbles of dissent in East Germany, Poland, Hungary, and Czechoslovakia, U. S. leaders, fearful of provoking World War III, adhered to the passive, defensive policy of containment. Reagan, Jones writes, believed that a more offensive strategy designed to bring about a “free and democratic Poland could unhinge the Soviet grip on Eastern Europe.”

Jones describes the rise of the Solidarity labor union in Poland under the inspiring leadership of Lech Walesa, a worker in the Lenin Shipyard in Gdansk. Solidarity was more than an independent labor union; it was the beginning of an organized political opposition movement that had widespread support throughout Poland and within the Catholic Church.

Solidarity’s rise coincided with the historic election of Pope John Paul II, a native son of Poland who showed the world that 35 years of communist rule could not suppress the spirit of the Polish people and their longing for freedom.

The Polish government, at the urging of Soviet leaders, cracked down on Solidarity and political opponents by imposing martial law in December 1981. Polish security forces raided Solidarity offices, set up roadblocks, seized media offices, and arrested and imprisoned more than six thousand Solidarity activists, including Walesa.

QRHELPFUL was not the brainchild of any one person within the Reagan administration, but instead resulted from ideas put forth by Richard Pipes at NSC, Robert Gates at CIA, National Security Advisers Richard Allen and William Clark, Defense Secretary Caspar Weinberger, CIA Director William Casey, and a “working group” of lower level officials.

Jones praises the unheralded work of CIA assets who implemented the covert program, including businessmen in several European countries. These assets developed methods to funnel money and goods to Poland to keep Solidarity alive and to aid its subversive efforts within Poland.

Robert Gates described these efforts as “underground political warfare” of the type recommended in the early years of the Cold War by James Burnham in his brilliant trilogy, The Struggle for the World (1947), The Coming Defeat of Communism (1949), and Containment or Liberation? (1951).

CIA money was used to publish underground leaflets, posters, journals, and newspapers, and to purchase typewriters, paper, and copiers for Solidarity. QRHELPFUL created a clandestine network of European businessmen, physicians, intellectuals, smugglers, political operatives, and even clergymen to help sustain the political opposition in Poland.

Jones describes the European “ratlines” or routes “used to covertly smuggle material, people, and money from one location to another.” The ratlines originated from such cities as Rome, Paris, Brussels, Hamburg, and Stockholm.

In 1985, Mikhail Gorbachev came to power in the Soviet Union. Gorbachev, Jones writes, recognized the economic weaknesses of the Soviet Union and implemented policies—glasnost and perestroika—that “set the stage for fundamental political change in Poland and across the Soviet empire.”

Reagan kept up the pressure on continued Soviet rule in Eastern Europe, famously urging Gorbachev in June 1987 to tear down the Berlin Wall. That same month, John Paul II traveled again to Poland where he “openly embraced Solidarity and its [political] goals.” This, Jones writes, was a direct challenge to the communist regime.

The end game came after Reagan left office. His successor, George H.W. Bush skillfully played the strong hand that Reagan left him and presided over the collapse of the Soviet empire in Eastern Europe.  Solidarity and its leaders gained power in Poland through democratic elections. The other satellite countries in Eastern Europe broke free of Soviet rule.

Ronald Reagan, with the help of the Pope, Lech Walesa, and other courageous Poles, and many unheralded CIA assets, had reversed the stain of Yalta.