A Country Road, A Tree: A novel 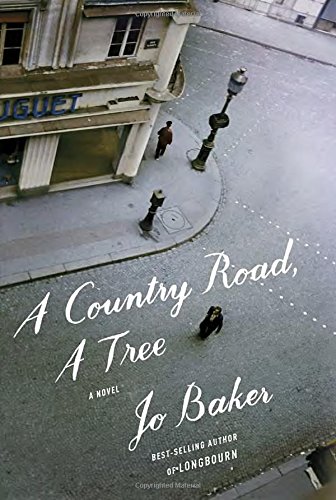 “An exceptionally moving and enthralling piece of historical fiction.”

Before the reader is halfway down the first page of Jo Baker’s novel, the endorphins are released and the mind smiles at the knowledge we are in great hands.

We begin following the journey of the young writer, Samuel Beckett, as he leaves the claustrophobia of the Irish homeland that stifles his writing. He returns to Paris where Suzanne awaits him, but this is 1939. It is the early days of the war, and pre-invasion changes begin subtly, but it is plain that neither they nor the reader are in for an easy ride as the tensions, dangers, and human indignities of occupation unfold.

When the Irishman joins the resistance, danger is never far away. Arrests and intimidation of “foreigners” are rife, and with him having no papers to leave France, Suzanne stands by him and together they head south to Vichy as “Anxiety makes the air thick.” Here he again meets James Joyce, the legendary Irish writer whose brilliance casts a shadow over Beckett as he struggles to find his own voice.

The physical torment grows fiercer still as the Nazis use hardship and hunger alongside their weapons of fear and destruction: “A canny weapon, hunger, the way it turns one in on oneself.” The harsh days turn into weeks and months, and we begin to see how these conditions change the Irishman and Suzanne in different ways. He needs to be engaged, whether by supporting families of betrayed friends or assisting the resistance. But Suzanne has to remain focused on their survival.

Their return to Paris and greater danger ends abruptly when a priest betrays the resistance group, and they flee for Roussillon and safety. Fraught train journeys, nights under the stars, and mile upon mile of walking to find resistance guides finally culminates in their being rewarded by the anonymity of a small country enclave. But when the Irishman again works with the maquis, the local resistance, storing weapons and preparing for the fight back, something festers between him and Suzanne as she fights her own personal battle for survival.

This is a fictional biographical account of Samuel Beckett’s wartime years in the country where he spent most of his adult life, a difficult genre but one Baker is expertly equipped for, with an in-depth understanding of Samuel Beckett and his work. It addresses his personal struggle to evolve into the acclaimed writer he later became.

But this book works equally as well as an exceptionally moving and enthralling piece of historical fiction. Thus readers not too familiar with Beckett’s work should not be deterred by its literary credentials: Just relax into what is sure to be an award-winning book, and more importantly, simply enjoy Jo Baker’s beautiful writing.