Count to a Trillion 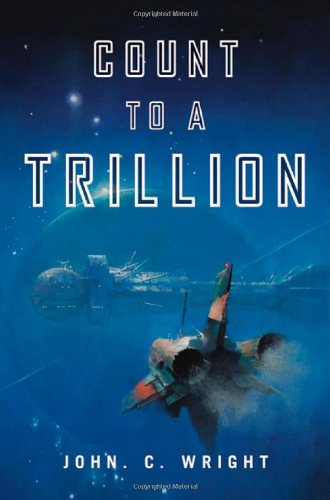 “One of the great pleasures of reading utopian sci-fi is that one sees the author play with wild and exciting possibilities, to present futures we might one day have to live, and to juxtapose a vision of a future society with our own less-than-perfect present. That is one of the reasons why Count to a Trillion was so disappointing.”

Over a hundred years from now, after a series of devastating biological wars, North America is struggling to hang on to even third-world status.

A young mathematical prodigy called Menelaus Montrose grows up in what used to be Texas. He works at a variety of menial and sometimes dangerous jobs. While acting as a paid duellist for a firm of lawyers, he is recruited by a man who might just save the world. A spaceship is being built to cross the 50 light years to another star, to harvest the antimatter discovered there and to read the runes on an ancient, orbiting monument left by a Galaxy-spanning super-race.

But Montrose is as reckless and foolish as he is mathematically gifted, and he is barely out of Earth’s orbit before he injects himself with an untested concoction that will amplify his intelligence well beyond human levels. The next thing he knows, he is back on Earth, 150 years later, and everything has changed.

Count to a Trillion is essentially a utopian sci-fi novel about a future society created by adventurer-scientists who brought stability and order to a world fractured and failing after almost destroying itself. Yet like most utopias, this version of global peace and world government is held together by duct tape and wishful thinking, as Montrose slowly discovers.

One of the great pleasures of reading utopian sci-fi is that one sees the author play with wild and exciting possibilities, to present futures we might one day have to live, and to juxtapose a vision of a future society with our own less-than-perfect present. That is one of the reasons why Count to a Trillion was so disappointing.

Beyond a description of how the new world order was forced upon the Earth, and some tidbits about the politics and social stratification of this future society, we learn very little about how this world works. With strong echoes of H. G. Wells’ classic, The Sleeper Awakes, Montrose wakes to discover he is in a society distorted and stultified by the power of the ruling elite – of which he is now a member. But it is not the economic systems of the new Earth that cause Montrose to reject this world, nor its educational, medical, or child welfare programs. Bizarrely, what bothers our Texan hero—disgusts him, even—is the fact that ordinary people are not allowed to roam the streets armed.

And that is symptomatic of one of the most jarring aspects of the book. It’s true that the hero comes from an impoverished, post-apocalyptic Texan home, but when he reaches maturity and he is an established mathematical genius, educated, an elite member of an interstellar space mission, and has his IQ boosted off the scale to become the first transhuman, it is peculiar that he still talks like a caricature of John Wayne in a low-budget Western.

This makes the hero seem a little comical, like Yoda, who can master the Force, but who can’t master English sentence construction. In fact, Menelaus Montrose is a bit of a fool, with almost no endearing qualities. To cap it all, when he falls for the heroine, he behaves like a sexist throwback, with endless cracks about “wearing the trousers” and spanking his “girl,” and all sympathy for him is lost.

Which is a shame. This is a book that had the potential to be so much more. It is solid, hard science fiction, brimming over with great ideas. Yet it falls into the trap of being overburdened with exposition (much of which is pure techno-babble); and the first part of the novel in particular feels slow and tedious as various characters fill the hero in on what he missed while he was asleep.

Much of the writing is very reminiscent of Golden Age sci-fi writer A. E. van Vogt, not only in its style but also in the use of supposed semantic and mathematical frameworks (mostly derived from alien writings) to understand human and alien behavior.

And then the story stops, quite abruptly, in the middle of an action scene. You may enjoy books that end on a cliffhanger with nothing resolved and every important character on the very edge of triumph or defeat—in which case, you’ll love Count to a Trillion.

But for many people, reaching the end of a novel to find you are left hanging is extremely frustrating. The intent may be to persuade the reader to buy the next book in the series (although none is promised) but in this case, the fate of this particular hero might be a matter of indifference to most readers.