The Correspondents: Six Women Writers on the Front Lines of World War II 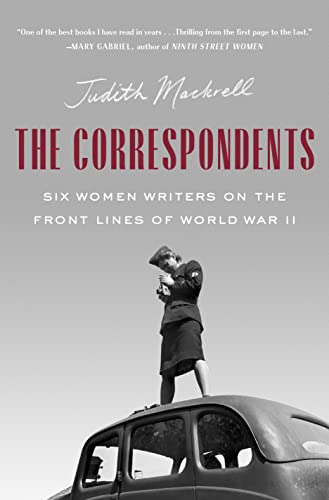 “a powerful narrative of WWII news, journalistic ethics, and women’s achievements in the face of daunting odds.”

Judith Mackrell has managed to fit three stories into one book. The first is a brief overview of women war reporters, starting with the Mexican-American war in 1846 and a woman named Jane Cazeneuve. The second tells the detailed journalistic war careers of six women. The third outlines how the press reacted to political and military events during WWII, highlighting the responsibility the free press has to make sure the public gets accurate information. All three combine into a powerful narrative of WWII news, journalistic ethics, and women’s achievements in the face of daunting odds.

Mackrell begins by introducing us to her six women correspondents, briefly describing their childhoods and how each one came to be a reporter, not a common profession for a woman, much less a female war reporter, which was a true rarity. Each woman had a unique background and drive for truth. Each had to trick her way to getting the kind of access easily accorded a male reporter. And each felt a responsibility to portray the events truthfully in spite of the political pressures to tone down stories or leave out harsh details.

Some of the women will have recognizable names. Martha Gellhorn is perhaps the best known since she was married to Ernest Hemingway. As a war reporter, her coverage of the Normandy invasion on D-Day was unparalleled—the only reporter to be part of the landing itself. Lee Miller may be recognized for being a Vogue cover model. But she went from that role to being the magazine’s war correspondent, starting with photographs and ending up writing stories as well. The other names are less familiar: Sigrid Schultz, Virginia Cowles, Clare Hollingsworth, and Helen Kirkpartrick. All of them ending up scooping their male colleagues on major stories.

Mackrell structures the book by first presenting us with each woman and her first assignments in the lead-up to WWII. Then the book follows chronological order, taking us through the dramatic news moments of WWII through their different experiences and stories. The focus on the human element, from refugees to soldiers to concentration camp survivors, lends their writing a raw and intimate power. Their stories are never simple lists of battle statistics, but journalism at its finest in its mission to take chaotic data and shape it into a coherent narrative.

These women made a real difference in their day, and Mackrell lets us know that wasn’t ignored. “After the war, the achievements of these women did not go unrecognized. Helen was honoured with the American Presidential Medal of Freedom, the French Legion of Honour and the Medaille de la Reconnaissance Francaise; Virginia was awarded an OBE by the British government; and Martha and Lee were feted as media celebrities.”

But the fame and appreciation were shortlived, which is why they remained forgotten until Mackrell’s thoroughly researched book gave us back their daring, intelligence, moral conviction, and impressive reporting skills.

Several times, Mackrell shows how one of these women recognized the game Hitler was playing while the politicians (and other reporters) were blandly willing to take him at his word. After seeing Guernica, for example, Virginia came to her own conclusions:

“The scale of destruction seemed egregious, even for fascists, and it dawned on Virignia that Mussolini and Hitler were not simply helping Franco win a war, but were using Spain as a testing ground for their own weapons. Like Sigrid, in Berlin, she was bewildered that so blatant a violation of international neutrality was meriting so little attention in the world’s press.”

Sigrid made a similar leap anticipating the news of the German-Soviet non-aggression pact: “She’d been told by her military sources, back in May, that Poland was next on Hitler’s list of acquisitions and she’d reasoned that some accommodation would have to be made with Stalin, who harboured his own designs on eastern Poland.”

Clare also had a smart guess about how the pact would lead to a Nazi invasion of Poland, despite promises to England. She snuck into Germany and witnessed the Panzer tanks massed for the invasion. Her phone call to her burueau chief broke the news for the British public

Mackrell makes each of these women a vivid character. The stakes were high both for them and the people they were reporting about. This is an important book, not just for women’s history, WWII history, and journalistic history, but as a timely reminder of the major role the press can play in protecting our freedoms and our future while telling us the truth about what’s happening in our world, no matter how painful or ugly.