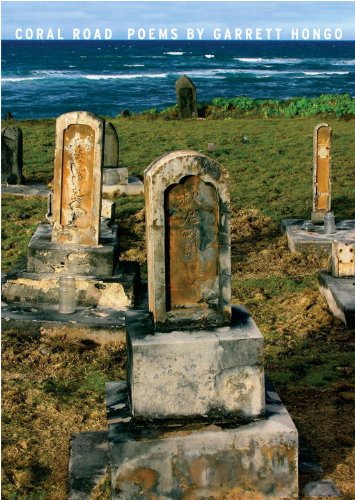 “This is deep music and clear, as the poet carries us to those places in the heart that ground and guide us. Coral Road: Poems by Garrett Kaoru Hongo is the strongest book of poems this reviewer has read in years.”

This is the third book of poems in Garrett Kaoru Hongo’s long career as poet and teacher at the University of Oregon in Eugene, which includes a nomination for a Pulitzer Prize, editing an Asian American anthology, and penning his award winning Volcano: A Memoir of Hawai’i.

His work has always been concerned with ancestry, and in Coral Road: Poems he weaves together a life tapestry, including family history, characters, and places. Deftly he discovers and traces patterns of ancestral immigration from Japan to Hawai’I, and survival in this new land, providing the book with brief genealogical charts and the striking and handsome cover photo of a family gravesite in Hawai’i. Though dealing with the past, the colors here are not dull, but strong, even bright with images of contemporary life, and the design is not dead and complete but still alive and growing.

In these lines from “Waimea-of-the-Dead” we watch as Hongo entwines the lives of his teenage sons with his own memory as together they journey to Waimea to view the ceremonial dance for the dead.

But my sons grew up with none of these, far from this past that was, to me,

Pushing a grocery cart up the cereal aisles of a sad Safeway.

Bobbed like glass floats along the intricate nets of electrical wire strung above me.

“Seeing themselves as “ghosts of our ancestors among the living of Waimea,” he takes his sons to the shrine to meditate, where his own initiation blends with theirs:

Namu Amida Butsu we murmured, Homage to the World-Compassionate One,

And a winding
veil of emptiness spun alert inside my heart, stranger in these shadows,

My soul aswerve like a battered moth, misdirected in summer flight by
the gentle web of pitches festival lights.

These poems are moved along by feelings of nostalgia and insight, punctuated by such marvelous imagery as the bobbing lights and battered moth.

Following the poetic Prologue, the book divides itself into five sections: Coral Road, The Wartime Letters of Hideo Kubota, The Art of Fresco, A Map of Kahukuku in Oregon, and Elegy. Because of the many geographic and historical references in the poems, Notes are provided at the back where they don’t interfere with the flow of the poems.

In one of the final poems, “A Map of Kahuku in Oregon” the poet stands in his Oregon home with the young child Annalena as she witnesses her first snow:

And I take her out on the deck. She blinks as the flakes

Fall on her face and on her lashes, making small crusts

Like a white mascara that melts invisible in an instant.

I’m a long way from what I know best, it seems,

Miserere from the Tallis Scholars on the stereo inside

Carrying out through the opened kitchen door,

Peace like a long reward after three generations of digging in,

Making a place on earth where the heart can be empty at last.

This is deep music and clear, as the poet carries us to those places in the heart that ground and guide us. Coral Road: Poems by Garrett Kaoru Hongo is the strongest book of poems this reviewer has read in years.