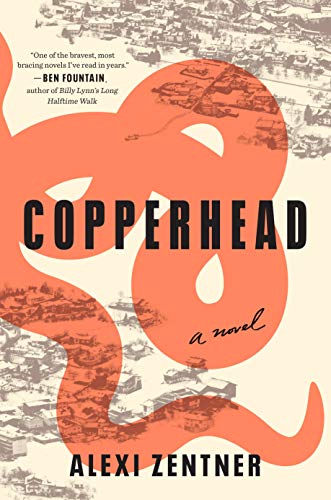 There are wonderful novels that transport a reader far from the world as it is. No one can be blamed for choosing the temporary escape they offer from the suffering we humans manage to inflict on all forms of life, including our own, whether by neglect or vitriol.

Their opposite may be the novels that drag us into the dark corners of contemporary life that we likely wouldn’t visit on our own, novels that challenge our preconceptions about character, about good and evil. They ask if the line between right and wrong might sometimes be confusing, even downright blurry. Some ethical questions—even the nice, clean WWJD?—are occasionally answered with a dumbfounded, “I have no idea.” Excruciatingly honest. And exceptionally brave.

Copperhead by Alexi Zentner is excruciatingly honest and exceptionally brave. It requires honesty and courage of an author, as well as writing chops, to give readers a sympathetic and credible character who is a white separatist and to put that character squarely in the context of a comprehensible life—judged, unforgiven, forgiven, unlovable yet loved in the eyes of his conflicted stepson, himself a sympathetic and credible character in a beautifully rendered coming of age story.

The work is also stylistically brilliant, fast-paced, and well-told in punchy, deceptively short sentences with verbs that pop them to life nestled in chapters of two and three pages each. A master of voice in the diction of a bright adolescent football player, Zentner not only captures but nails his first-person narrator, Jessup, and creates reader empathy quickly. There are paragraphs, too, of simply gorgeous writing.

Here, for example, is a single chapter, titled Wept, describing a character in a crucial moment of change.

“Sounds: snow laying itself down like tissue paper unfolded; the wind unrolling lightly across the tops of trees; regret.”

Copperhead is set in Cortaca, a guessable amalgam of Ithaca and Cornell, where there’s a readily conjurable expensive university in upstate New York, not quite but still calling itself Ivy League, a wannabe football powerhouse. It has a good local tax base and education-valuing citizens who pay for a strong public school system, a fine jumping off point for a very smart, motivated student to get into a real Ivy League school. A student like Jessup, who’s applied to most of them looking for a full-ride scholarship, has a real chance even without wealthy parents to back him up. He has the grades and the football talent, and he’s being recruited.

Zentner’s thematic concerns are ambitious. Jessup’s stepfather, David John, is a genuinely good father. We aren’t told this so much as we see it. We also see that he’s just out of prison for what was deemed a hate crime. Only it truly wasn’t. He was defending Jessup’s older brother’s life.

David John’s other stepson was the victim in what had started as a mugging by two black men, targeted because he had blatantly racist tattoos. However, David John—a committed Christian who preaches respect and “turn the other cheek”—sure does believe that the races should be separate and has the tattoos to prove it, including one that says FGRN (For God, Race and Nation), which didn’t help his case. Now that he’s been released and come home, he expects Jessup to attend services with the rest of the family at the Blessed Church of the White America out on its private compound, where they’ve formed their own militia to prepare for the coming race war.

Jessup hasn’t gone to the church once in the four years of David John’s incarceration, especially not since he’s fallen for his black coach’s daughter, not that anyone but his best friend Wyatt knows about it. Wyatt, a member of David John’s church, doesn’t approve, but doesn’t get in the way. Best friends are, after all, best friends.

A solid premise to start with, and then Zentner ups the ante. Jessup, who straddles gratitude for the positive difference his stepfather makes in his family and discomfort with David John’s belief system, is forced into David John’s world when he’s caught in an exponentially growing web following an accident he tries to cover up.

It speaks for the excellence and moral realism of the ground work Zentner has laid that Jessup’s decision to try to control the outcome is understandable; the mess in which he finds himself was not his making, but it could determine the course of his life. He’s seen what happened to his stepfather and stepbrother. Of course, it’s far larger than he can control, and the unspooling makes for a riveting story.

One might well wish that Zentner had dared to end the story without the epilogue. He was, perhaps, too much in need of assuring his readers of a certain ultimate outcome. In fact, he’d done enough. He’d done more than enough. Bravo!