Cool Beans: The Ultimate Guide to Cooking with the World's Most Versatile Plant-Based Protein, with 125 Recipes [A Cookbook] 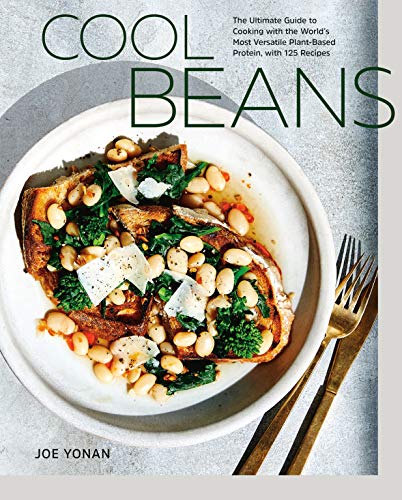 “The photographs illustrate the beauty of every bean.”

How does a cookbook whose focus is heirloom beans attract readers and cooks? What is its appeal? It stems from flavor. Imagine garlicky herb-infested bean stews that originate from Greece, Tunisia, Italy, or France being the stars at dinner.

Joe Yonan, the author of Cool Beans, is well acquainted with food. He is the food and dining editor of the Washington Post and has penned at least three additional cookbooks. He grew up with a mother who loved to cook and began shopping for the family’s groceries when he was eight.

In this cookbook, Joe Yonan has authored a collection of 125 creative recipes that portray the bean as the star. His ingenious concoctions and instructions demonstrate how the home cook can transform the “cool bean” into effortless, luscious, and tempting inspirations.

The unassuming and humble bean is cheap, healthful, and nutritious. It can be the sustenance for the healthy vegan, and Joe Yonan reveals to his readers how the bean is anything but ordinary, common, or humble.

Chef Patti Jinich, star of her own Mexican Table food network show, describes his book as an “unexpected adventure into the world of beans.” He transports the cook to Mexico to learn and taste these stunning creations. We discover that with the bean the cook can create anything from soups and stews to chilis, and yet they are delectable on their own.

The photographs illustrate the beauty of every bean. The white and red cranberry bean, the marbled maroon with specks of white Christmas lima bean, the vaquero bean reminiscent of the hide of a cow, and the yellow eyed bean are a few that are part of the splendid palette that contribute to the beauty of this humble pulse.

Yonan reveals that “Mexico, India, Nigeria, Israel, China, Italy, Japan, Spain” as well as “the United States, Morocco, and Peru” are a few of the countries where beans are part of the “culinary fabric.”

Once the cook discovers the multitude of options that the bean possesses they discover that the bean is a “soulfully” satisfying addition to a meal. Consider cooking the bean in a pressure cooker, a Mexican bean cooker, or a pot found in every kitchen.

Adding beans to one’s diet we discover that their health benefits are extraordinary. They have been proven to lower one’s cholesterol, decrease blood sugar levels, and increase healthy gut bacteria. The author, who is also a vegetarian, “reveres beans as the most important plant-based protein in the world.”

Most beans are low in fat and calories, aiding in weight loss. That is the benefit of the chickpea easily found at most salad bars. Lentils make great soups and salads. Kidney beans and black beans are often found in Mexican cooking. Pinto beans and navy beans create savory Boston Baked beans.

The wonder of Joe Yonan’s cookbook is that he explores the less common beans such as cranberry beans, cannellini beans, lima beans, and ayocote beans.

The reader discovers that all beans are not the same in taste and texture and health benefits. The adzuki bean, for example, is an amazing cure for urinary tract problems and are shaped like a kidney. Jacob’s Cattle look like the hide of a cow. Explore the Christmas lima, black-eyed beans, the royal corona, the black turtle, even chickpeas are grown in black.

The cook who absorbs the contents of this book will become versed in a variety of cooking methods, starting with the important issue of whether to soak or not to soak beans before cooking. Yonan delves deeper into the less spoken consequences of digesting the bean. That is the “magical/musical” notoriety of the bean. He offers several solutions, and one is to cook the beans with a piece of kombu (a Japanese seaweed), which breaks down the culprits that cause the music.

The cookbook opens with a chapter on dips and snacks and a delightful white bean dip with harissa-roasted carrot. Continuing onward we discover a recipe for black lentil crackers which are “super-crisp and full of texture.” Perfect for “scooping” up the dips.

Adding beans to salads is a phenomenal way to add protein to a lunch, and Joe Yonan offers plenty of innovative approaches to achieve a yummy protein packed meal.

The chapter on soups, stews, and soupy sides is the star of the show. The kitchen fills with aromas from the herbs and spices he adopts. Lemon juice and mint. Apple cider vinegar and chive blossoms. New England baked beans with smoked paprika, maple syrup and molasses. Cuban-style orange-scented black beans with its cumin, garlic, orange juice and onions tickle the olfactory senses.

Most unanticipated is the last chapter on desserts. Red bean ice cream is common in Asia but unfamiliar in the United States. Making a chocolate mousse from aquafaba (the liquid found in a can of chickpeas) needs to be tasted to be believed.

Beans have been a part of our culture for centuries. It is known that Native Americans made baked beans and that the Pilgrims added molasses to their recipe and ate the beans with brown or corn bread. Cholent, a traditional Jewish bean stew, is known for simmering overnight to conform to Jewish law which forbids cooking on the Sabbath.

And this remarkable cookbook, Cool Beans, will sustain the vegan cook for many creative meals and be a part of a cook’s library for years.