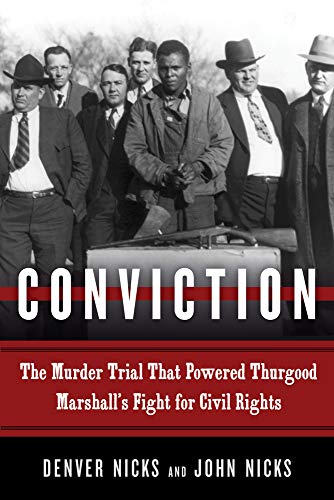 “This case had everything: ‘a vicious ax murder, a baby burned alive, a political scandal, murderers set free, an innocent man tortured with a blackjack and a pan of charred bones fighting for his life.’”

Thurgood Marshall first made a name for himself as an attorney for the NAACP, fighting for civil rights in an era when those rights seemed to be foreign concepts for some. Later, he served as a federal appellate court justice and United States Solicitor General, and finally as an associate justice on the United States Supreme Court, still fighting to make sure those rights, guaranteed by the Constitution, were made available to people of all races.

His remarkable record as an attorney before the Supreme Court shows an overwhelming win/loss record. But there are some losses, no matter how rare, that stick with you, that haunt you, and that inspire you. In Conviction: The Murder Trial that Powered Thurgood Marshall’s Fight for Civil Rights, authors Denver Nicks and John Nicks tell the tragic true story of one of those losses.

In the days leading up to World War II, the NAACP, with its new chief counsel Thurgood Marshall, was already “adept at influencing public opinion” and was looking for its next case.  Specifically, Marshall wanted “clients who had been wronged on account of their race and, perhaps of greater importance, whose cases might establish legal precedent that would reach far beyond any single client’s plight and thus move the needle for black Americans in favor of full racial equality before the law.”

In other words, Marshall needed a cause more than he needed a client. He found both in the form of Willie D. Lyons, better known as W. D., a 21-year-old black farmhand accused of a triple murder in Choctaw County, Oklahoma. Initial suspicion for the gruesome murders of a couple and their four-year-old child fell on white convicts who were part of a controversial prison work camp that was a pet project of the governor.

But in order to divert attention from that potential political time bomb, law enforcement officials needed a suspect of a different color, particularly after a surviving child spoke of witnessing a “black hand” involved in the murders. W. D., who had been seen in the area earlier that day carrying a shotgun, made a perfect target. Though some skeptics cried foul, law enforcement responded that they had W. D.’s confession. What else did they need? Case closed.

Except the confession had only been obtained after hours of brutal beatings and threats. As the authors tell it, “Mere days after Lyons’s arrest, whispers began to emerge that interrogation techniques more severe than ‘cross-fire examination’ were used to get a confession out of him.” That made the case a natural for Marshall, fresh off a Supreme Court victory in Chambers v. Florida, which threw out confessions obtained via extreme interrogation techniques that fell short of the physical beatings in W. D.’s case.

Marshall’s eyes must have lit up when presented with the case, one that could “provide fodder for big-print newspaper headlines across the country.” This case had everything: “a vicious ax murder, a baby burned alive, a political scandal, murderers set free, an innocent man tortured with a blackjack and a pan of charred bones fighting for his life.”

Conviction takes the reader inside the legal strategies in W. D.’s defense and paints a picture of the bigger panorama of racial injustice that spawned Marshall’s and the NAACP’s crusade. Sadly, it is also the story of justice denied as the same Supreme Court that decided Chambers v. Florida rejected similar arguments brought by Marshall on behalf of W. D.

And, in a striking but unpleasant reality, there are hints that Marshall the crusader cared more for the cause than Marshall the lawyer did for the client. At one point, Oklahoma authorities were apparently prepared to negotiate W. D.’s release, albeit based upon a false premise, but Marshall rejected the offer with a curt “no compromise,” determined, instead, to pursue an appeal that might make landmark law. Whether the negotiation was corrupt is open for debate, but “[m]ost troubling, there is no evidence that anyone ever discussed the offer with W. D. Lyons.”

In Conviction, the authors tell of a noble, but flawed, lawyer and the tragic case of a client destined to spend 20 years in prison for a crime he likely did not commit. That lawyer went on to fame and acclaim and is buried at Arlington National Cemetery.

His client, on the other hand, emerged from prison a broken man who later took his own life and is buried in an unmarked grave in an African American cemetery in Okmulgee, Oklahoma. But while his grave is unmarked, Conviction stamps the name of Willie D. Lyons indelibly on the social conscience.