Convicting Avery: The Bizarre Laws and Broken System Behind "Making a Murderer" 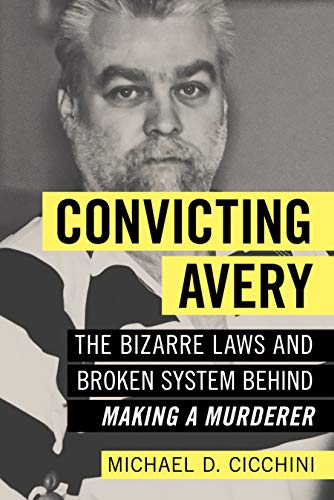 In 2015 Netflix released the controversial documentary Making a Murderer, which explored the story of Steven Avery, a man from Manitowoc County, Wisconsin, who spent nearly two decades in jail for the rape of Penny Beerntsen, before being cleared by DNA evidence in 2003. After his release he sued the Manitowoc County sheriff’s department for wrongful conviction but was arrested in 2005 on charges of murdering Teresa Halbach, a local photographer.

In 2007, Steven Avery was convicted and sentenced to life in prison without the possibility of parole. In Convicting Avery: The Bizarre Laws and Broken System Behind “Making a Murderer,” author Michael D. Cicchini dissects the tangled legal procedures and sketchy evidence that was used to convict Steven Avery and Brendan Dassey. The author himself is a criminal defense attorney in Wisconsin, blogger, and author of several legal books that includes Tried and Convicted: How Police, Prosecutors, and Judges Destroy Our Constitutional Rights (2012). He is also a contributing columnist for the Wisconsin Law Journal.

At the beginning of Chapter two Cicchini writes, “When I first opened my criminal defense practice . . . I started with a naïve belief that trial judges would be wary of wrongfully convicting an innocent defendant . . . but after a few months of practicing law, I completely abandoned my unfounded beliefs and stood corrected.”

By scrutinizing key evidence in the Avery case such as tainted physical evidence, dubious witness testimony, and illegal police searches, Cicchini skillfully examines and explains the legal how’s and why’s of these controversial convictions. He successfully uses the Avery case to highlight police misconduct and the obviously broken Wisconsin legal system while convincingly demonstrating that the injustices perpetrated against Avery and others were not an unusual occurrence. Cicchini writes, “Wisconsin loves its massive, draconian, ever-expanding, and increasingly irrational criminal justice industrial complex.”

Convicting Avery will most definitely captivate fans of the documentary, and while Cicchini had no direct involvement in the Avery case, this book adds expert legal depth to the key procedural and evidentiary issues that were raised in the original documentary. It provides a rare glimpse inside the complex American criminal justice system.

Although this book certainly assumes that the reader is acquainted with the Making a Murderer documentary, the author’s writing style and concise analysis allows those not familiar with legal terminology to easily comprehend the complexities of the case.

Overall, Convicting Avery is a revealing and fascinating read that will interest readers of true crime, criminal law, or American legal procedures. It will most certainly stimulate further discussions of how someone can be railroaded and falsely convicted of a crime. But regardless of your position on Steven Avery's guilt or innocence, the content of this book raises important concerns about a clearly broken legal system.