Contraband Corridor: Making a Living at the Mexico-Guatemala Border 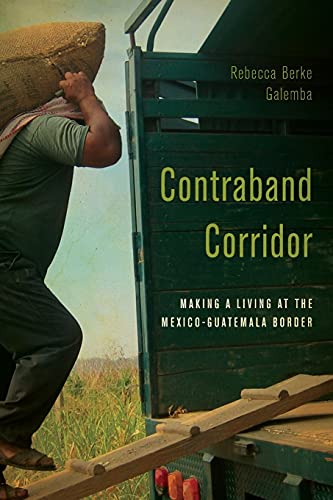 “Trillions of dollars move through the world’s markets illegally, and millions of people work in extra-state activities. They move everything from the dangerous (narcotics, toxic waste, arms) through the luxurious (diamonds and art) to the necessary and mundane (food, clothing, and electronics).”
—Nordstrom*

Contraband Corridor focuses on the fluid movement of mundane commodities across the Mexican-Guatemalan border that would be well-qualified to be called the “middle of nowhere.” This far-flung outpost is, however, a critical passthrough for all manner of illegal, illicit, and licit goods.

Rebecca Galemba chooses her subject in part because other forms of trafficking are too dangerous to explore, but also because everyday goods are a complexly contested and negotiated category depending on with whom you are speaking—federal and state bureaucrats and politicians, police, military, local merchants, middlemen, workers, or truckers.

Galemba crafts a portrait of a region whose informal economy depends on basic infrastructure: unmonitored roads. The military and police are a clear presence on monitored roads and sometimes pop up on their unmonitored counterparts. In both cases, their presence feels like a form of political theater—making a good show of it but having little interest in infringing upon the flow of everyday items that change hands at “depots”: cleared fields that operate as transshipment sites as goods change hands between Mexican and Guatemalan truckers.

While this border area may appear marginal, it is also economically dynamic and connected to the regional and transnational economy. That dynamism is driven by illegal and illicit activities. Indeed, this not-so-shadow economy is one of the few remaining job options for average border dwellers who participate in a highly stratified system. Workers eke out a living and those with the capital to buy trucks or serve as the merchant class thrive. And it all happens in broad daylight out in the open.

Reflecting back on ethnographic fieldwork I undertook in rural Central Mexico in the late 1980s, contraband was an important part of the local scene. Every Thursday, farm families would pile over to the facyuca (black market) where fayuceros (smugglers) sold everything from refrigerators and stereos to clothes—all were illicit imports from the U.S. and beyond. It, too, was wholly out in the open without any presence of or harassment from the authorities.

By now readers should be wondering why mundane commodities are rendered illegal or illicit in the first place. Just what is illegal and illicit is shaped by state policy and enforced (or not) by the military and police. That commodities pass back and forth across a political boundary through unmonitored, extra-legal roads renders them “smuggled,” and “contraband” from the perspective of the state.

Merchants, truckers, and workers chafe at these pejorative labels, arguing no commodity that is a basic staple of life (corn, beans) could ever be thought of as illegal. Galemba further notes, “The local, informal agreements that allow this corn [to] flow are what residents experience as free trade.”

Ironically, unmonitored roads have tollbooths at the border that charge trucks to pass through. Note that goods are not being taxed, but transport is. Locals argue that they are the only true and legitimate border authorities and that state officials often overreach their duties and are corrupt because they take bribes to keep commodities on the move. This is very reminiscent of the American state’s rights argument for local sovereignty.

The presence of the state is, however, a crucial element of the border dynamic. For its monitoring presence objectifies the boundary between the two counties. Defining that which is illegal and illicit also furthers a border security agenda that is underwritten by American foreign aid and keeps massive amounts of money and material flowing southward.

This is the magic of the state. A non-problem is labelled a problem unleashing all manner of resources and personnel to manage and control it. Of course, if the state were actually successful it would put itself out of business. Lucrative foreign aid would dry up. Bribes greasing the economic machine would be gone. The state is, thus, empowered and possessed by its ability to define that which is illegal.

Galemba does not, by intention, focus on far more fraught forms of trafficking (narcotics, arms, humans). Of course, together these bring tremendous resources and attention to the border. They too are subject to security-surveillance theater: checkpoints (fixed and mobile), patrols, stops, and well-armed security forces. Busts are made, bribes are paid, and the flow of the illicit is little impeded.

There was a fixed checkpoint on a major highway in Central Mexico back in the early 2000s. An officer at the stop asked a nonsense coded question (something on the order of “When does the rabbit walk backwards at midnight.”). I did not know THE answer or any answer. I was pulled over and the contents of my car were thoroughly inspected as numerous big rig trucks sailed through. The Mexican Army had done its due diligence and duty.

As I pulled out several Mexican soldiers chased my car. What now? I stopped, thinking they were going to search my car again. Instead they asked if I would give a soldier a ride northward to Matehuala, where there was a military base.

Why not? My companion for the next hour was a charming, articulate career soldier from a working-class family. He explained that the military presence on the highway was meant to manage, not stop the flow of illicit goods and people. He noted that before the military build up there were robberies, murders, and kidnappings all along the highway, mostly at night. Now that happened rarely.

As we neared our destination he pointed off into the distance. There was a town just out of view that he said I’d find interesting. In the grindingly poor, hard scrabble surroundings was a cluster of expensive, modern homes along with a clandestine airstrip. He said the Army would occasionally patrol there, but it would be empty when they passed through. Otherwise they left it alone. He said I could come to my own conclusions. He said he had and shrugged with resignation.

Contraband Corridor is an outstanding contribution to the literature on informal economics in Latin America. Its ethnographic approach humanizes everyday smugglers, challenges the stereotype of the backward and ignorant peasant, and highlights powerful forms of local organization and governance.

Taken together her work defies the commonly held notion of the margins as lawless, chaotic, and dangerous. Rather, borders are transgressed, commodities flow, and life goes on sometimes with the unwanted intervention of the state.