A Conspiracy of Friends 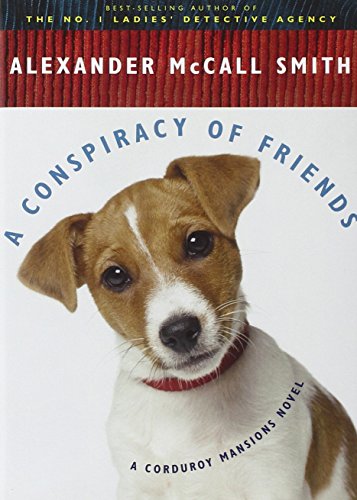 “Mr. McCall Smith seems to natter on, telling the same stories over and over again, confusing old locales for new, and continually showing you pictures of his dog, who is, after all a nice dog, but still. . . .”

Depending upon your literary tastes, the question comes down to either how or why it is that Alexander McCall Smith is able to turn out the number of books that he does, all stacked neatly in their various series, set in Edinburgh, London, Botswana, and points beyond.

Either way, it’s both a fair and provocative question.

Alexander McCall Smith is, of course, best known for his No. 1 Ladies’ Detective Agency series, a very long and successful series of what might be generously termed “mysteries”—all neatly solved by the owner of the agency, the levelheaded and lovable Precious Ramotswe.

In truth, these tales are more honestly whimsical character studies with a case-of-the-week television air to them (and they have been successfully adapted for television on HBO) than true mysteries, but somehow, given Mr. McCall Smith’s light touch and literary slight-of-hand, no one seems to care.

These and Mr. McCall Smith’s other series of tales—the Sunday Philosophy Club, overseen by Isabel Dalhousie as sort of a “literary detective;” the 44 Scotland Street Series, which is not at all unlike the Corduroy Mansions series, except that Scotland Street is in Edinburgh, Scotland, and Corduroy Mansions is set in Pimlico, a slightly seedy section of London—are perhaps best and most often described with adjectives such as “charming” and “delightful.”

And Mr. McCall Smith has done nothing in his new book that will upset the applecart. Those given to kvelling over the sweet foibles of his characters and their completely benign antics (this applies to heroes and villains alike, especially in Conspiracy, a tale in which a chief antagonist undergoes what truly may be termed a “road to Damascus” experience) will likely sip their sherry through this book as through all the others, chuckling all the way, and will, upon finishing it, nod off in their comfortably worn-in wing-back chairs as they lull in front of their fireplaces as the blazing oak logs slowly combust into a heap of darkened ashes.

There are those, however, who think differently.

Those who like this reader once upon a time found Alexander McCall Smith beginning to wear out his welcome. Once a new Ladies’ Detective Agency novel was a rare thing, but the man’s output now weighs in at over 50 novels, all so very much alike in structure, style and (lack of) mystery—a sad thing for series of supposed detective novels, after all—has us with so many books coming at us so thick and fast, dodging the very thing that he once sought.

At this point, Mr. McCall Smith is rather like an old friend who you meet for coffee after having an extended absence, only to find that he has not aged at all well.

Where once he was filled with colorful commentary, witty observations and wickedly entertaining tales, now Mr. McCall Smith seems to natter on, telling the same stories over and over again, confusing old locales for new, and continually showing you pictures of his dog, who is, after all a nice dog, but still. . . .

Which brings us to Mr. McCall Smith’s new work, A Conspiracy of Friends and to the dog in question, a Pimlico Terrier unfortunately named “Freddie de la Hay” (try saying it without speaking in some variation of baby talk).

Freddie figures greatly in the whole of the Corduroy Mansions series, a series named for what would be termed an apartment complex here. There, in London, it is spoken of with a bit more reverence:

“You know this place we live in, Corduroy Mansions, isn’t at all posh. You do know that, don’t you? Pimlico’s a bit of a mixture, and we’re not one of the grand bits. But it’s got character and there are nice shops nearby, and you can just about get to work on foot if your office is fairly central.”

So says Caroline, who shares a flat with a changing roster of other young people, all just starting out in adult life. Above them lives William, whose boon companion is the aforementioned Doggie de la Hay.

Also in the complex is psychotherapist Berthea Snark, about whom we are tantalizingly told that she “had tried very hard to love her son, but had eventually given up, thus joining that minuscule group—mothers who cannot abide their sons,” before she disappears from these pages for way, way too long.

There are others as well, including one Basil Wickramsinghe, a man so honest that the “the tax authorities had asked him not to submit quite so many receipts with preparing his own tax returns.”

See? How “whimsical.” How “charming.” How “delightful.”

As is the case with Mr. McCall Smith’s fiction, now some fifty books into his run, plots are plotted, threats are made, love is ignored, hearts are broken, dogs are lost down rabbit holes, businesses are threatened, rooms are rented, car accidents occur when least expected, and it all ends with a glass of a nice Madeira, just as it should.

Buy the book or don’t buy it, borrow it from the library or not, read it or ignore it—none of these will stop Alexander McCall Smith from marching toward his 100th novel, no doubt about a Pekingese who lives in a row house in Baltimore. (Does Armistead Maupin know of this? It all seems so suspiciously similar to a series of books written some time ago, set in an apartment building at 28 Barbary Lane in San Francisco.)

But as for me, who sat through entirely too many Dalhousies, a good many Scotland Street stories, and the unbearably twee Portuguese Irregular Verbs series, my advice is to stick with Precious and her No. 1 Ladies’ Detective Agency and then stop reading after the charming and delightful Blue Shoes and Happiness.