Conscience: The Origins of Moral Intuition 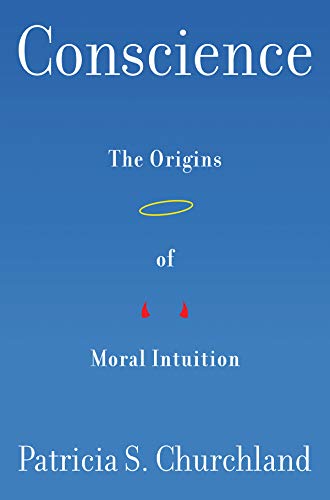 “Churchland’s take on conscience is likely messier than most of us will find comfort in, yearning as we do for moral clarity and certainty in order to make our decisions easier and put our conscience at rest.”

Patricia S. Churchland, founder of neurophilosophy, is that rare author who can write a book about a deep and profound subject such as conscience and still manage to make it down to earth, accessible, and even humorous at times.

For readers not familiar with neurophilosophy, it means exactly what it sounds like: informing philosophic thinking through the exploration and application of scientific study, especially in neurobiology and evolutionary psychology. While paying homage to the development of morality through reason, cultural norms, and religion, Churchland’s money is on what she calls the “whole-brain” function: “biology—instincts, learning, problem solving, and constraint satisfaction.”

Churchland asks and answers questions central to understanding conscience and its origins: What is the purpose of feelings in human attachment? What part do caring, personality, and reputation play in the development of personal ethics? What facets of the brain are involved in forming judgments about right and wrong?

The book begins with a historical journey to understand how previous ages grappled with the slippery subject of morality. The Greeks, best illustrated by Plato and Aristotle, lacked a single word for “conscience.” It was deemed con scientia by the Romans, meaning “knowledge of the community standards,” though both ethnic groups recognized that conscience does not always mean adhering to these standards and sometimes even involves battling against them. The author also explores conscience through the lens of Christianity, Buddhism and Confucianism, theologians such as Martin Luther and philosophers such as Immanuel Kant.

Churchland’s working formulation of conscience is: “an individual’s judgment about what is morally right or wrong, typically, but not always, reflecting some standard of a group to which the individual feels attached.” Factored into her description of conscience are the “feelings that urge us in a general direction, and judgment that shapes the urge into a specific action.”

The author explains why we are wired and socially driven to care about others and why human infants are born so helpless compared to those of other species. She maintains that “mammalian ancestors were adapted for sociality” and that “in the evolution of the mammalian brain, feelings of pleasure and pain supporting self-survival were supplemented and repurposed to motivate affiliative behavior.” Simply put, “the range of myself was extended to include my babies.”

Add to this expanded circuitry the hormone oxytocin, which promotes social attachment and caring, especially for mates and infants, and the stage was set for empathy to occur as “an ever-present factor in how humans decide what accords with the demands of conscience.” Churchland goes on to make the case that “neural wiring for attachment and bonding provides the motivational and emotional platform for sociality, which enables a scaffolding of social practices, moral inhibitions, and norms.”

The fact that humans possess far larger and more complex cortical circuitry than other mammals enabled them to engage in what Churchland calls Big Learning. Larger brains required more food so that humans learned to cook to feed themselves, priming the evolutionary pump. Larger brains developed more distinct functions and led humans to become more flexible and, therefore, more adaptive to different situations. Flexibility, in turn, made them better able to survive and flourish.

This process is facilitated by the reward system’s neurotransmitters dopamine and serotonin, which perform a crucial role in reinforcing what we desire and fear, moving us toward what brings pleasure and away from what causes pain. Additionally, Churchland describes how personality factors and social attitudes strongly influence what we view as good or bad.

Some of the most fascinating sections of the book (especially in this polarized political climate) include twin studies on heritability and brain research on the marked differences between the brains of conservatives and liberals. Churchland also delves into a nuanced discussion of psychopaths diagnosed as lacking empathy and non-psychopaths who have Anti-Social Personality Disorder. At the other end of the spectrum, she describes what happens when “moral behavior knows no limits, when it is uncontrolled,” which is called scrupulosity, a type of Obsessive-Compulsive Disorder.

Churchland believes that conscience works best when we are in balance, no easy task when we are prone to go to great lengths to hide truth from ourselves. Sifting through philosophies such as Utilitarianism and Kantianism and debates about the role that reason and free will play in morality, her take on conscience is likely messier than most of us will find comfort in, yearning as we do for moral clarity and certainty in order to make our decisions easier and put our conscience at rest.

Churchland’s final chapter brings the whole discussion home and covers what works and doesn’t work to enhance morality in our own lives and to improve our criminal justice system. One approach to achieving balance is modeling ourselves after others whom we respect and admire. Other recommendations for individuals include practicing honesty and avoiding self-deceit, arrogance, and certitude plus developing positive habits, also known as virtues, such as kindness, courage, patience and compassion which become our foundation in making moral decisions and choices. Socially conscious, Churchland also tasks us with creating a world that favors “decency, respect and kindness.” She seems to be saying that because we have the neurobiology to fashion such a benevolent environment, it is time to find the will to make it happen.