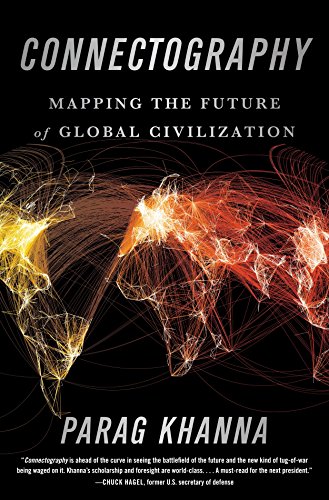 Donald Trump must be punching himself for not locking up the rights to the title of Parag Khanna’s second book in the trilogy that Connectography now completes. Khanna’s previous tome carried the truly Trumpian title: How to Run the World. His latest is a 466-page doorstopper, but its title and subject are safely and decidedly un-Trump. While Trump will have us build walls, Khanna extols connectivity as destiny.

Indeed, in a world where the air is thick with chants of “America First,” the European Union is fraying, and the Middle East continues to turn the clock back on Sykes-Picot, Khanna appears concerned that readers will not give connectivity a chance; he goes to heroic lengths to hammer the point home. It is difficult to make your way through the first tenth of the book without being assailed by connectivity-themed fortune-cookie maxims.

Once he has driven home the point that he is here to talk us through “connectivity” and we have a long journey ahead with many more references to it, Khanna, pairs connectivity with additional travel companions. Exhibit A: “Supply chains and connectivity, not sovereignty and borders, are the organizing principles of humanity in the 21st century.”  It is therefore easy to locate the “supply chain” maxims that are generously scattered throughout—consider yourself warned.

More buzzwords abound. First, Khanna has quite a bit to say about “devolution.” Then shifts to “nodes,” are principally charmless but comfy cities, such as Dubai. Then, Khanna hop-scotches to SEZs—Special Economic Zones. Just when you thought the hipness was over, we are treated to “blowback.”

“Blowback reminds us that we live in a world of complexity rather than linearity and of the compressed timescales of today’s feedback loops.” Ultimately, Khanna makes a case for a Pax Urbanica. Megacities, he predicts, will displace nation states as the units of power, analysis, and the basis for our understanding of the dynamics of human civilization.

At this point, for all those of you who have graduated from the Tom Friedman Academy of Pretty Much Everything Without Borders, what here is new? Is this not a recycling of that old workhorse “globalization?” Indeed, Khanna tips his hat to that seemingly quaint idea by reserving his most breathless sentence—in a book with no shortage of them—to describe it:

“Globalization has become a multidirectional series of tsunamis that surges across the oceans and undertows continents into the collective currents.” Khanna, almost as mysteriously, yanks the rug from under globalization with: “There is actually little reason to speak of globalization in the future tense—only degrees of connectivity.” We’ve come full circle.

Khanna has yet more to offer. Indeed, to connectivity he adds a healthy helping of cartography—and presto, you have a neologism—“Connectography”—and a set of PowerPoint visuals that is just the perfect nourishment for the hungry hordes at a TED gathering.

Maps are marvelous. Not only of maps of the antiquarian (e.g. the “here be dragons” kind), but also of the digitally re-mastered maps that are produced with clever software that can manipulate those familiar land masses and superimpose data on them to produce fun facts guaranteed to make you the most annoying guest at your next dinner party. Several of the maps reproduced in Khanna’s books are new, while others are familiar, for example, to those who follow NYU and IESE Business School professor Pankaj Ghemawat’s work.

Unfortunately, in order to deliver on the promise of Mapping the Future of Global Civilization Khanna probably felt it would be unfair to readers to simply deliver a stack of PowerPoint slides full of just maps; hence, he dutifully proceeds to fell trees and produce hundreds of pages densely packed with prognostications about the future of global civilization.

The pages are loaded with information spanning time, space, and a generous helping of global trends that are the all time favorites of the denizens of Davos, TED and, yes, even schools of world affairs: digital innovation, climate change, demography, etc.

Khanna is extraordinarily well traveled. He has ventured well beyond the usual circuit of Singapore, New York, or Brussels. Khanna has been to so many global hotspots off the beaten track—spanning sites in Iran, Pyongyang, Crimea, Tibet, and Urumqi—that one wonders how he has time to write books.

Even his reputation apparently travels far and wide. According to him, he held the distinction of being the “most hated man in Mongolia” for a brief moment in 2009. He had also driven from London to Ulaanbaatar, a journey deserving of its own book, no doubt, particularly since it involved a “near death experience in remote Siberia.”

We even learn that travel is encoded in Khanna’s genes: 22 percent Mediterranean, 17 percent Southeast Asian, 10 percent northern European, and only about 50 percent Southwest Asian. So much for making blanket assumptions that Khannas are all solid Punjabis with farming roots in the land traversed by five rivers straddling northern India and Pakistan.  For Khanna, connectivity, no doubt, is destiny.

By the time one has managed to finish the book, one may have the sense one has after landing bleary-eyed at an airport in the wee hours of the morning in a time zone 11 hours away from one’s home. Despite all the maps along the way, one gets a bit lost. Usually, after a mentally taxing tour de force of serious book reading, one can take refuge in the acknowledgements section to find something personal and relatable. In this case, one despairs when the acknowledgement section opens with: “When one is writing a book about everything, it never hurts to have the world’s most knowledgeable people in one’s corner.”

Despite the extreme travel and the support of the world’s most knowledgeable people, there is little about Khanna’s insights that seem new. Déjà vu assaults the reader at almost every turn. Has one read this before, perhaps in a McKinsey Global Institute report or on a World Economic Forum panel?

In some places, Khanna’s unqualified enthusiasm for the taking down of political boundaries as a theory of the future feel a tad overdone. By 2030, more than 70 percent of the world’s population will be urban and the megacities will have more clout than nations. Supposedly. Will military, trade, and interest rate policies made at the country level cease to matter? It certainly doesn’t look that way when one considers that even today Janet Yellen’s every gesture is the object of speculation worldwide.

The intense speculation that follows the ascendance of a certain real-estate tycoon with plans to take his megacity megadeal-making experience to the international level certainly does not suggest the end of nations. Angela Merkel and David Cameron still matter, as does the European Union. This remains true even if the most positive news out of Europe is that a Pakistani bus driver’s son has been installed as the mayor of London, the megacity that may cease to be in the union.

Of course, there are connected networks, communities, and tribal arrangements that matter beyond political boundaries, but there are units beyond the ones Khanna has identified. One would not declare that Facebook or SnapChat or Katy Perry’s followers on Twitter matter more as a group than countries or even megacities?

Khanna attempts to leave us with a message of hope. He claims that competition over connectivity reduces our collective risk. He argues that there will no more be a need for “resource wars.” Huh? Tell that to the people in much of sub-Saharan Africa and parts of Latin America who have seen their fortunes ride up and down the commodity cycle, while competitive connectivity from China and elsewhere play havoc with their economies.

Khanna goes on to declare, “Distributed connectivity helps us avoid any single point of failure. With the right investments today, the nine billion people on earth in 2050 could be more evenly distributed across the hemispheres while also being more mobile and more adaptable to the unpredictable forces of nature.” Double huh? Supposedly the dispiriting news about the fate of refugees in Europe attempting a more even distribution across the hemispheres has not dampened Khanna’s enthusiasm.

One line to take away from this book that has a few lines too many is this: “We expend huge effort to measure the value of activity within borders; it is time to devote equal effort to the benefits of connectivity across them.”  Well said. Indeed, more work needs to be done here.

The core idea of the importance of connectivity is a solid one. Given all the bashing that world trade is getting these days in the U.S. presidential election circus—and it is not just Donald Trump to blame here—one would be tempted to second former U.S. Secretary of State Chuck Hagel’s cover blurb for Khanna’s book: “A must read for the next president.”

Whoever that next president turns out to be, the PowerPoint version of Connectography would indeed be a “must scan.”