Conformity: The Power of Social Influences 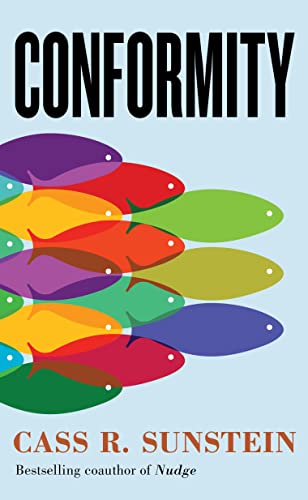 Conformity is both necessary for a society and one of its grave dangers. Cass Sunstein has been interested in this tension for a significant part of his career. His interest does humanity a service.

The problem of conformity can be explored poetically as by E. E. Cummings:

“i sing of Olaf glad and big

whose warmest heart recoiled at war:

Or conformity can be explored in workman-like prose. This is Sunstein’s medium.

As the world-class lawyer he is, Sunstein methodically presents his case for the ways in which social science has almost tediously demonstrated the conditions that favor conformity. At first this threatens to be a social science 101 review of the well known and lesser known experiments of post-World War II research. This was the period when thinking people had to ask how the murderous conformities of that century came to be and what must we learn from them.

A little patience on the reader’s part, however, is well rewarded. There are lessons Sunstein gleans and raises up that have not received wide enough attention. If anything, as developments in social media amplify the dangers of polarized views run amok; it is more urgent than ever that this gloss is remedied.

Perhaps Sunstein’s most important contribution is his focus on “cascades.” He defines cascades as “large-scale social movements in which many people end up thinking something or doing something because of the beliefs or actions of a few early movers.” Note that this is a value-neutral statement. Cascades can be pro-social or anti-social. The importance is for individuals and collectives to understand the mechanisms behind them and to make conscious choices about their responses. In my own work on leader-follower dynamics, the power of the first few followers is crucial to supporting a leader’s breakthrough ideas or to interrupting toxic and bullying behavior.

Sunstein identifies two distinct and mutually reinforcing mechanisms behind cascades: “informational influences” and “reputational influences.” He deftly reveals the different social forces that can keep individuals from revealing their true assessment of a situation, resulting in collective decisions that are not supportable if each individual’s truth were known to the group. He lightly, but importantly, suggests group processes that can mitigate this tendency and its poor or disastrous results. Others, more versed in group process and team development would do well to build on these pointers.

Sunstein’s deep knowledge lies in the judicial world. His application of cascade dynamics to judicial findings may be where his voice has the most potential to raise awareness and possibly outcomes. At a minimum, his analysis of judicial group behavior should be included in curricula that prepare judges at different levels of the system and contribute to their ongoing education.

Having said this, all of us who participate in group decision making would benefit from a closer examination of social influences on our own behavior. Sunstein talks about “go-along-concurrences” whether in companies or in the White House where he worked. We would do better to reveal our reservation before a final decision is made.

To his credit, Sunstein is not dogmatic and insistent. He acknowledges that “If the central goal of group members is to maintain and improve social bonds . . . conformity may be just fine.” But in groups that exist to make the best possible decision, dissenting voices must be vigorously welcomed.

The other major theme of the book relevant to our time is polarization. Once again, Sunstein dutifully cites social science research. Though evidence of this effect is all around us, it is still disturbing to review the research that shows when groups consist of relatively like-minded individuals, their insular conversation pulls all of the members further to the extreme viewpoint of their argument. When that extreme viewpoint is expressed by a very confident individual, they tend to prevail. This should caution us to be alert to the overly confident perspective and be ready to question its data and premises.

This segment of the book also makes the most supportable argument that may exist for diversity of backgrounds and perspectives. The value in group diversity does not lie in diversity itself being a socially laudable objective, but rather in the hard fact that it materially improves the available information upon which quality decisions are made.

A final point deserving comment is the contribution this book makes in distinguishing between the law’s role in establishing positive societal norms versus its role in punishing violations.  Laypersons may not previously have been exposed to this distinction. Citizens who are disturbed by the wanton assignment of draconian prison sentences for correctable infringements, may find this an important contribution. The law can make positive use of our tendency to conform when promoting visible, prosocial behaviors such as smoke-free establishments. We would do well to have lawmakers become more familiar with this gentler power of the law.

Ira Chaleff is an author, speaker and workshop presenter. He is Visiting Leadership Scholar, Moller Institute, Churchill College, University of Cambridge, England. His most recent book is Intelligent Disobedience: Doing Right When What You’re Told to Do Is Wrong, winner of a 2016 Axiom Business Book Award for Business Ethics.