The Conflict: How Overzealous Motherhood Undermines the Status of Women 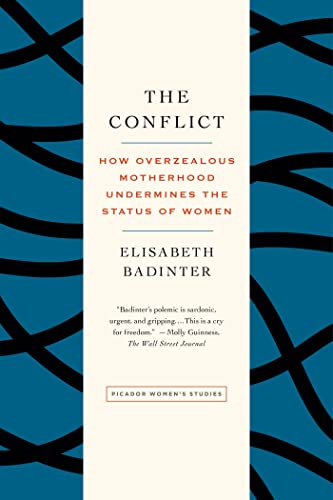 Elisabeth Badinter is a celebrated French feminist and philosopher though probably less well known in what this book terms “English-speaking countries.” In The Conflict: How Modern Motherhood Undermines the Status of Women, originally published in French in 2010, Ms. Badinter seeks to demonstrate how the philosophy of “naturalism” which gives primacy to motherhood over other aspects of women’s role has retarded gender equality.

Some countries have been more vulnerable than others to this approach; America of course is a sink of “naturalism” despite the well-documented epidemic of Caesarian-sections and the medicalization of health care in general and childbirth in particular, of which the author seems unaware.

Other countries that have fallen prey to overemphasis on the role of mother in the total package of women’s identity are Germany, Japan, and Italy as is demonstrated by their respective languages.

“The German ‘mutter,’ the Italian ‘mamma’ and the Japanese ‘kenbo’ project a mythical aura of motherhood at once sacrificial and all-powerful. By contrast the specter of the French ‘maman’ and the English ‘mommy’ seems rather insubstantial.”

There is perhaps a contradiction here that she has not explored. Aren’t the U.S. and the U.K. also in the grip of naturalism? The term “English” is often used rather broadly, as the equivalent of “Not-French” though it appears on occasion to reference the U.K.—specifically as in “an astonishing 20 per cent of English babies regularly or occasionally wear cloth diapers.” Be very astonished.

Counterintuitively the unlikely trio of comparators Germany, Italy, and Japan have experienced a decline in the birth rate as women are less prepared to take on an “all-or-nothing” attitude to motherhood.

Against all global odds and trends France and French women display a totally different attitude to motherhood according to the statistics she has chosen. In France the birth rate has remained relatively steady at around 2.0 with even a slight rise in 2009 which is the latest figure shown.

French women (“as wives, mothers, professionals”) show an undiminished appetite not only for reproduction but smoking and drinking during pregnancy, contraception, abortion, and bottle feeding, and outsourcing infants at an early age while still doing enough to keep the population stable and apparently enjoying a full and varied life. The chapter French Women: A Special Case gives an added dimension to the expression “vive la difference!”.

According to Ms. Badinter, the source of French women’s “nonchalant” attitude to motherhood derives from the 17th and 18th centuries when “the model of the ideal woman has not been limited to motherhood.” Though some upper class English or English-speaking women have been allowed to sneak in parentheses “Liberated from the burdens common elsewhere eighteenth century French women (and English) from the highest ranks of society enjoyed the greatest freedom of any women in the world.”

Throughout the book Ms. Badinter downplays the influence of political, legal, religious and economic and even marital factors on reproductive choice in favor of reproductive choices being a strictly private matter: “the outcome of an intimate dialogue between a woman and herself and has nothing to do with an ideological stance”. It is doubtful that Chinese women—to take just one example—would agree. But perhaps she is only talking about French women here.

The “naturalism” approach, essentially the equivalent of the “New Domesticity” is crystallized in a number of organizations and movements—notably the La Leche League and the United Nations WHO/UNICEF Baby Friendly Hospitals Initiative (BFHI)—which Ms. Badinter treats with disdain.

France has consistently held out against the BFHI, a programme which has greatly reduced infant and neonatal mortality associated with unhygienic bottle feeding in many countries; but then as she says, Paris is not the Sudan.

Ms. Badinter presents a number of statistical tables usually without clear sources or dates. National statistics of course mask many differences among any population even of women—socioeconomic status, age, ethnicity, confession - and some of these are raised and dismissed. The Irish though showing some similarities with the French have religion to deal with; and the large immigrant population in France has had no noticeable effect on the birth rate.

To adopt Ms. Badinter’s methodology it is interesting to assess through other sets of national statistics the level of gender equality French women have achieved by their enlightened approach to motherhood.

In the Gender Gap Index 2012 produced by the World Economic Forum, based on inequalities between women and men in economic opportunity, educational attainment, political empowerment, health, and survival, France perches at a modest 57 out of 130, just between Israel and Madagascar.

Some of those countries expected to be in the grip of naturalism still seem to come in ahead in the equality stakes: the UK at 18, the US at 22. And the triplets of comparators Germany, Italy, and Japan at 13, 80, and 101 respectively.

Which only goes to show that these kinds of tables while eagerly awaited every year do not tell us very much.

The author cherry picks other information across centuries and sources—Marie-Claire to Charles Darwin and in that order—to support her argument of the uniqueness of French women.

Skillfully and sometimes even wittily she sets up straw men to demolish by her arguments, notably the Ten Commandments of Breastfeeding from “the Alternamoms website.” She is not always well served by the translation and often the English-speaking reviewer is left to wonder whether this book . . . or perhaps it is a collection of essays produced for other outlets such as the engaged “glossies” (Marie-Claire?) is just an elaborate intellectual’s joke whereby Ms. Badinter is in fact poking fun at rather than buying into the well-established stereotype of French women as being quintessentially different and superior from the rest of humankind.

All this having been said The Conflict should not be judged for what it is not. And there are many things one can agree with, including the statement that no country has yet achieved gender equality by its own or others’ judgment. Yet both the analytical approach and the conclusions reached suggest that this is not intended as a scholarly work nor aimed at experts in the field.

For newbies to the arguments it will undoubtedly provide an exciting, provocative, and even dangerous few hours.