Confessions of a Left-Handed Man: An Artist’s Memoir 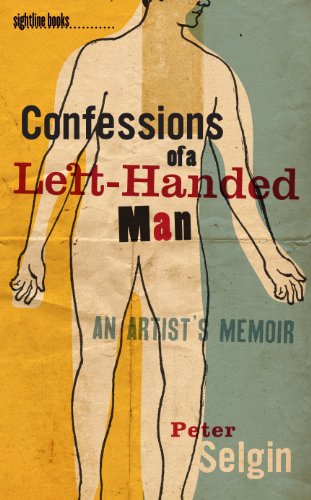 “Tawdry as this first love affair with literature may have been, how glad we are that Peter Selgin was tempted into it—and fell head over heels. Without such an addictive beginning, that boy may never have grown up to become a writer of such great substance.”

As Mr. Selgin tells it: “On the ceiling of the Sistine Chapel in Rome, in the central panel of the most famous painting by that other Renaissance lefty, God, floating on a cloud of purple silk, bestows life on the first man, Adam, through the fingertip of his right hand. Adam, however, who has been created in God’s image, accepts the gift with his left hand.

“Michelangelo knew what he was doing. According to the Roman poet Isidorus, a secret blood vessel runs directly from the index finger of the left hand to the human heart—the heart, not the brain. God wished to bypass the intellect and launch his spark straight into the heart of man, who reaches out to lend Him a hand. The left one.”

Like Michelangelo, this artist, author, playwright and academic is even an inventor of sorts—as was his own father, who worked full-time as an electronics inventor—“though I invent completely impractical things out of words and paint, and that only work on paper.”

And work they do, seducing, in the case of his writing, with words which vividly evoke the nostalgia of an American childhood, as well as the regular tribulations of life, as they touch, enlighten and often amuse.

Made up of a collection of beautifully wrought autobiographical essays, Confessions of a Left-handed Man reads as seamlessly as if it were designed as a full-length work.

Peter Selgin was an eccentric child—think the TV shows “The Wonder Years” meets “The Big Bang Theory”—but that was perhaps inevitable, given that his Italian immigrant parents were somewhat idiosyncratic themselves. The books in his home were mainly in his father’s favorite languages—French and German—not counting his beautiful but English-challenged mother’s beloved Italian pulp magazines. So when in 1971 Mr. Selgin lost his “literary virginity,” he was instantly and completely smitten.

It was hardly surprising: Nelson Algren’s The Man with the Golden Arm’s racy, heroin-junkie subject matter was heady stuff even for adults in those days, let alone 13-year-old boys:

“To read novels was to run far from home, to hop freight trains and shoot heroin and murder someone’s husband for their life insurance and fall in love with dark angels . . .”

Tawdry as this first love affair with literature may have been, how glad we are that Peter Selgin was tempted into it—and fell head over heels.

Without such an addictive beginning, that boy may never have grown up to become a writer of such great substance.