The Conduct of Saints 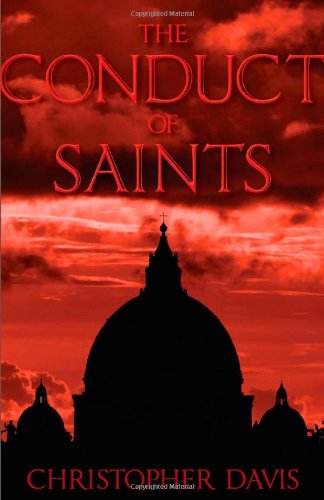 “In The Conduct of Saints the sacred and the profane truly collide in post WWII Rome.”

Christopher Davis is a master at getting into the minds of his characters, and through them weaving his story. The author spares no one in conveying how “God, sex and the Devil collide in the impoverished city of Rome during May and June of 1945.” In The Conduct of Saints, there is little content that is bright or joyful, but the reader will come away with a sense of history in all its unvarnished and perverse detail.

The war has ended in Europe, but people’s personal wars within themselves continue. Mr. Davis introduces us to many characters, each of whom is a metaphor for human frailty. From them, we draw our sense of time and place.

Early on we meet Brendan Doherty, Vatican prelate, a hard drinking, heavy smoking attorney and ordained priest who suffers a heavy conscience. He wrestles demonic loneliness as he resists then gives in to memories from his earlier life. Alcohol is the only thing that blunts his senses.

His role as priest and advocate offers little personal comfort. As a handful of survivors return from Auschwitz, he searches in vain for a family he befriended during the German occupation. He battles to uphold the sanctity of life in defending Pietro Koch, a Nazi war criminal who is certain to be sentenced to death. Doherty, in spite of his conscience, is not above bribes and other means to achieving his own desires.

As Devil’s Advocate (the person in Catholic Liturgy who argues against a candidate’s proposed sainthood), Doherty strives to discredit Maria Goretti’s killer, Allesandro Serenelli, who is now out of prison and campaigning for her beatification. (Maria Goretti is known in Catholicism as “the child martyr” who died defending her own honor.)

Allesandro Serenelli’s authenticity as a madman is believable and scary. We learn of his sordid childhood and a history of schizophrenia in his family. He is in Rome to provide testimony in defense of Maria Goretti’s beatification (a step in the process of reaching sainthood).

Serenelli seeks refuge in a monastery, where he gives his own food to children begging outside the walls. Eager journalists offer bribes for his story, but he ignores them all. These deeds hint at sanity, yet while he stares through a crack in the wall on the children coming out of school, one wonders about his mental state—and fears for the children under his unrelenting gaze.

Pope Pius XII is portrayed as a holy but ineffective figure. He is sickly and offers prayers and papal audiences as solutions to problems. The Pontiff urges Doherty not to interfere too much with Maria Goretti’s beatification: “. . . we need a proclaimed saint for our youth, a role model for the wavering; for those corrupted by Communism and the American and English soldiers.” In other words, “Do your job well as Devil’s Advocate, but not so well that this won’t go through.”

In Regina Coeli Prison, Pietro Koch waits. He is sure to die for his role in the torture and death of hundreds, nay thousands of Italian citizens during the German occupation. It was his decision to send them to an Italian version of Russia’s Gulags. As for political prisoners, he considered them “useful” and so became a master at interrogation. No physical violence, but perhaps an unidentifiable scream emanating from elsewhere in the building—or a little blood spilled—helps to loosen up his subjects. There is a hint of Epiphany as he prays in his cell and the sounds of the street invade:

“At midnight he could still hear a voice from the street . . . A lone woman, he decided, sleepless like himself, one whose husband or son had died at (other prisons), or who had been related to one of those selected by Koch to die at the Ardeatine caves. A woman’s voice—a mother’s, a wife’s—as always, the last to be heard.”

His contrite realizations change nothing.

Continually playing in the background are details that provide a profound sense of place: children beg at cafes, young boys sell the services of their sisters and/or themselves, sexual favors abound at all levels.

The “haves” spare no expense in enjoying fine food and wine, while others struggle even for bread. Former Fascists hover behind newspapers while awaiting passage out of the country. Soldiers of the Allied Occupation trade, steal, or destroy art treasures.

The Conduct of Saints is a compelling, complex, character driven story. The writer draws us into the halls of the Vatican, into the spartan and isolated or secretly lavish quarters of its troubled inhabitants, into the inner circle of people who can buy their way in and out of critical situations.

We enter the lonely and isolated lives of Doherty, Serenelli, and Koch—all exquisitely fleshed out—as each wrestles his demons, his desires. Every chapter of The Conduct of Saints should be read and then considered, and perhaps read a second time, to truly appreciate the depth of Christopher Davis’s insights.

In The Conduct of Saints the sacred and the profane truly collide in post WWII Rome.