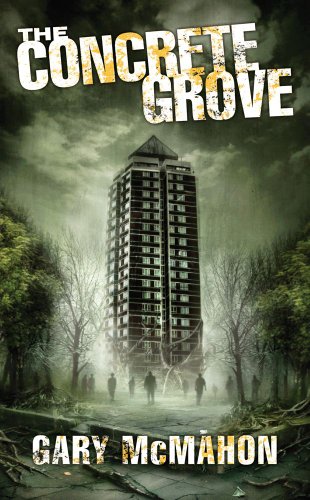 “The Concrete Grove conjures up images that will haunt readers long after the book is put away.”

The Concrete Grove is the first book of the eponymous trilogy from British horror writer Gary McMahon. Set in the northeastern of England, it tackles the very real and current issues facing those who find themselves trapped at the bottom of the pile, either in rundown housing projects or in lives that have turned bad for one reason or another.

Mr. McMahon’s writing is crisp and minimal. As a result, the crime and misery of a crumbling urban landscape are portrayed with an uncomfortable edge. As if this were not enough, a parallel supernatural world is woven deftly into the story.

The reality of The Concrete Grove—underfunded and crumbling estates, drugs, murder, rape, corruption and general urban decay—will be all too familiar to some. Mr. McMahon says that he has based his characters on real people, and they are incredibly engaging—even the villains. It is impossible not to empathize with even the nastiest of thugs.

Such a story of desperation could stand on its own, but author McMahon adds the chill of a darker world that exists alongside the housing project. Some of the creatures are works of genius, and the use of hummingbirds to send shivers down the spine of the reader is the height of originality.

The Concrete Grove conjures up images that will haunt readers long after the book is put away.

McMahon’s writing builds the tension and keeps the reader guessing to the very end, cranking up the terror with the turn of every page. His complex vision of the supernatural world echoes the early works of Clive Barker yet is original to the core.

The Concrete Grove twists and turns through dark alleyways, finally delivering a shocking an unexpected finale. The second book in the trilogy will be eagerly awaited. Mr. McMahon is a welcome and refreshing member of the horror scene.