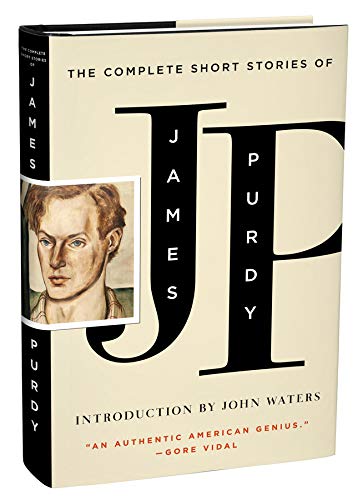 “The greatest beauty of this collection is that . . . James Purdy captivates.”

The question to be asked is not “Why have the many, many short stories that James Purdy wrote in his long career as an undervalued and largely unread American author been collected together?” The question that needs asking is, “Why has it taken so long for a true omnibus edition to see the light of day?”

Or better still: “Why couldn’t this have been published a few years earlier, so that the man himself could have lived to hold it in his hands?” Purdy, who died in March of 2009 at age 95, would have most assuredly have held on a bit longer had he only known. . . .

James Purdy, author of over a dozen novels, myriad poems, and a trunk load of short stories (the volume totals over 700 pages), is considered something of a “writer’s writer.”

He earned the praise of such diverse talents as Lillian Hellmann, Marianne Moore, and James M. Cain, even Edith Sitwell was a fan, to say nothing of Edward Albee, Dorothy Parker, and Gore Vidal (whose assessment of Purdy as “an authentic American genius” anchors the short story volume’s front cover). Both Paul and Jane Bowles (to whom Purdy is often compared) agreed concerning his genius.

He was much published after having run away from Ohio to Chicago to lurk about the jazz world and then to Brooklyn to become a writer. He was once nominated for the PEN/Faulkner Award. But in spite of all this, his reputation never made it past the publishing community, and he never “caught on.”

But at last we have this edition of stories through which we can celebrate his talent. And through which newcomers can have the opportunity to come to know him and the fictional world that he inhabits.

The volume is introduced by John Waters, which is just as it should be, as Waters is to film as Purdy is to fiction, both sharing a common irreverent viewpoint, both lilting and crass.

In his introduction, Waters instructs:

“Think of The Complete Stories of James Purdy as a ten-pound box of poison chocolates you keep beside your bed—fairy tales for your twisted mind that should never be described as innocent. Randomly select a perfectly perverted Purdy story and read it before you go to sleep and savor the hilarious moral damage and beautiful decay that will certainly follow in your dreams . . .”

Of the stories themselves, he continues:

“Many of Purdy’s characters are terribly sad. So distressed they ‘want to be dead like a bug.’ So lonely that they call the prerecorded weather or time message on the phone for company or go to the doctor every single day for social contact. One man is so filled with sorrow in his old age that he retreats to a phone booth and speaks into the dial tone coming from the receiver about the dead: ‘They are all gone. All of them.’ In towns so mall (one is described as having a ‘population about four hundred people including the dead’), isolation is everywhere. ‘There isn’t anything to say about such private sorrow,’ one of Purdy’s characters announces, but yet there is, and James says it with wit, incredible sympathy, and elegant understanding.”

True, all true. And like the bit about wanting to be that dead bug, the turns of phrase to be found in these stories astounds:

Like the apartment “on the fifth floor of a building that leaned forward slightly as if it would bend down to the street.”

Or this: “He was honest like a pane of the finest window glass. I loved his openness.”

Or an old doctor’s memory of a patient and her sad life, “Ruthanna’s story kept presenting itself to him like the streamers of northern lights in the autumn sky.”

Or this, so quick, so delicious: “Jess had looked hurt as he had danced with her that night. He had looked like a man who has been slapped with a wet towel.”

These are words that cause salivation. That make the eyes bulge. That force the errant snigger.

There is a certain strange envy that may be applied to works of art, specifically to films. That feeling of jealous joy in knowing that someone is going to have the opportunity to see some beloved movie, Annie Hall, say or The Apartment or Chinatown, for the very first time. That feeling of wanting to share the moment with them, of sitting next to them and watching not just the screen but the image of the film reflected in their eyes.

The same applies here. The same applies to the thought that someone will, with the publication of this overdue volume, have the chance to read “The Color of Darkness” for the first time, and, best of all, of being able to put it into the context of the fully body of the stories, good and bad and ugly, presented more or less in the timeline of their publication.

The reader feels justified in his envy of anyone who, discovering Purdy now, gets for the first time to peruse this distillation of the supposedly impotent anger of youth (a common enough occurrence in any number of Purdy’s stories, presented perfectly here) unleashed on the all-powerful parent:

“Without warning the son kicked the father vigorously in the groin and escaped, running up the stairs.

“Baxter stepped deliberately from the safety of the upper staircase and pronounced the obscene word for his father as though this was what he had been keeping for him for a long time.

“The father writhing in pain from the place where the boy had kicked him, managed to say with great effort: “tell me where he learned a word like that.’”

Fathers and sons tend to have a terrible time of it in Purdy’s stories, as do brothers, lovers and husbands and wives. Things go missing (diamonds, relatives). Things get found. Gypsies are consulted, the occult clings close, Ouija boards are picked up and tossed aside: “It sat wordless and morose under our touch.”

It is a humid place, Purdy’s world, a place where mattresses hide bedbugs and kisses all cost something, one way or another. But it is a world populated by “Short Papa,” a tall, lean man so named for “the many times he had been sent to jail for a short stretch,” and the incomparable Dr. Noddy in “The White Blackbird,” who climbs a bell tower on a winter’s night to make a point, and Fenton, poor Fenton, both protagonist and antagonist of the haunting “63: Dream Palace,” about whom we are told this:

“’Why is it?’ Fenton asked, raising his voice as though addressing a large group of people, ‘when I am so young I am so pissed-off feeble and low?’”

The greatest beauty of this collection is that from first to last—from the juvenilia (which, admittedly, gives only a glimpse of what is to come) to his final tale, the brief and wry “Adeline” written when he was 92—James Purdy captivates.

And that is more than reason enough to celebrate this bravura edition.