The Complete Raise the Dead 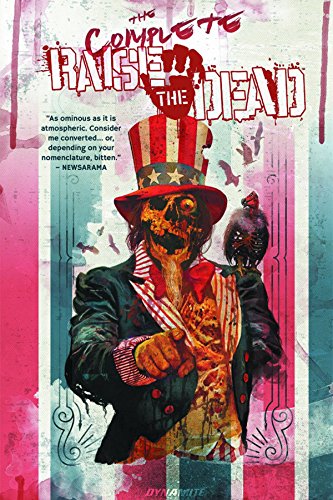 Let's face it, back in October 2003 The Walking Dead lit a fire under every writer that was a zombie fan. It brought back the classic Romero esthetic to the genre that films like 28 Days Later had played with and reinvented. So it was no wonder that only a couple years later, Dynamite Comics would try to bottle some of that lightning that Image Comics had found and bring out their own series, Raise the Dead.

The Complete Raise the Dead collects the full run of the zombie comic book series that the back cover calls "wildly successful." When the series first came out, it found a solid place among the many other zombie properties that were inundating the marketplace with the undead. But just like so many other works, it eventually succumbed to audience burnout and only lasted for a total of eight issues. Whether this short run was intentional or not, eight issues just isn't enough to build characters and a world that readers can get lost in.

Yet the series is obviously written by folks that know the genre. There are direct nods to George R. Romero's Night of the Living Dead and other zombie works. The first issue starts off with a group of folks trapped in a bus station diner. Distrust and panic overtake them and things get out of hand quickly. This is the classic zombie apocalypse survivor scenario. That isn't a bad thing. It gives the reader a chance to get to know each of the characters as they all handle the nightmare they're thrust into.

Unfortunately, the characters are killed off so quickly that the reader never gets a chance to really connect with any of them. Some backstory here, some flash of personality there, some hints at things to come, but no real depth. The success of The Walking Dead hinges so much on how invested readers get into the lives of Rick Grimes and Company. The readers of Raise the Dead aren't allowed the time to get invested. This is the biggest flaw of the series.

But, this being a collection, the published comics aren't all that are offered. There are reprints of the individual issue covers, bonus materials that include character sketches, the script to the first issues, as well an interview with the writers and a foreword by Max Brooks, the publishing industry's go-to guy when it comes to zombies.

All in all, it is an entertaining read and the art is superb. If someone is a fan of the zombie genre, and especially graphic novels, then Raise the Dead would be a great addition to the shelf.