The Compendium of Amazing Gardening Innovations 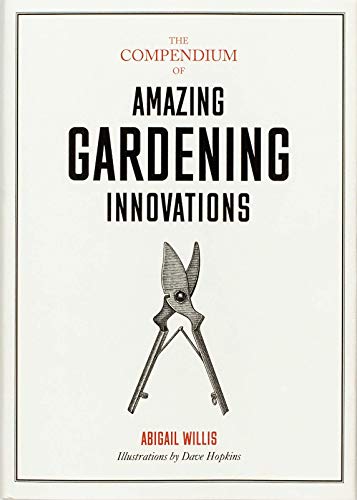 From anti lawn movements to Arts & Crafts gardens, herbaceous borders to ha-has, guerrilla gardening to garden rooms, The Compendium of Amazing Gardening Innovations by Abigail Willis is rich with concise—yet detailed—information about a wide variety of garden related topics.

It is a book readers can dip into, cherry picking topics of interest, but also one that many will find so fascinating, they’ll want to read it cover to cover.

“The militaristic analogy was apt; many of the chemicals in the twentieth-century gardener’s arsenal also served in the two world wars.”

In contrast, modern organic gardening has its roots in northern Europe where Rudolf Steiner began expounding his ideas about the “spiritual foundation” of agriculture in 1924.

An early adaptor to organic gardening was Lady Eve Balfour, who after earning a degree in agriculture from Reading University in Berkshire, England, used her inheritance money to purchase Haughley Farm in Suffolk in 1919. In 1939, she launched the Haughley Experiment, the first long-term, side-by-side scientific comparison of organic and chemical-based farming. Founder of the Soil Association in 1946, she wrote, “The health of soil, plant, animal and man is one and indivisible.”

Among the best-known plant hunters in the United States were Lewis and Clark, who discovered garden-worthy treasures such as Philadephus lewisii and Clarkia pulchella. They made it back home after two years and four months of death defying travel. Other plant explorers weren’t so fortunate. Willis writes, “The story of plant hunting is otherwise littered with corpses, catastrophes and pitfalls of the most literal kind.”

The Royal Horticulture Society sponsored Robert Fortune who managed to smuggle tea plants out of China, but also found himself fighting pirates and dangling over a boar pit. He contracted malaria. David Douglas (of Douglas fir fame) managed to make his way safely across America, but
“met an untimely end in 1834, aged just 35, at the bottom of a wild bullock trap in Hawaii.”

Lest readers think that these horrible hardships were limited to 19th century plant explorers, Willis points out that, “in 2000, Tom Hart Dyke spent nine months in captivity, having been kidnapped while searching for orchids in the Panamanian jungle.”

A fun topic Willis addresses is plant crazes. During the winter of 1636–1637 at the height of Tulip Mania, some bulbs were reportedly changing hands ten times in a day, although no deliveries were ever made to fulfil any of these contracts. In February 1637, tulip bulb contract prices collapsed.

In the early 19th century there was the orchid craze, fueled by William Cattley’s success in coaxing a tropical orchid into flower in 1818. Willis notes dryly that, “Cattleya labiate bears his name in recognition of this achievement.” As an aside, she notes that the great botanist and plant explorer Joseph Banks described England as, “the grave of tropical orchids.”

Ferns enjoyed their moment in the sun in the 1840s. “Collections could be a couple of ferns in a Wardian case [another book topic] in a smoggy London terrace, or an entire valley recreated in a designated ‘fernery’ . . . World War I signaled the end for full-blown pteridomania.”

The idea of island beds is credited to Alan Bloom, who lived to be 98 after a career breeding and/or naming 170 plants and writing 27 books as well as creating the extraordinary garden and nursery in Bressingham, Norfolk.

Willis points out the error in that thinking, explaining that the idea surfaced not in the 1950s when Bloom first created them, but as early as 1771 when island beds were, “a feature of the flower garden designed by William Mason for the Earl Harcourt at Nuneham Curtenay; Victorians also deployed island beds in their formal gardens, setting them into lawns and using them as a vehicle for colorful displays or tender bedding plants.”

Willis introduces readers to the plight of women gardeners and garden writers who had short shrift until the 1830s when Louisa Johnson, Elizabeth Kent, and Jane Loudon began writing about the subject, targeting women as their audience.

Jane Loudon began her career as a science fiction writer, and was a gardening novice before she married the renowned Scottish botanist, garden designer, and author John Claudius Loudon. Not long after her marriage, she became a trusted garden authority as well as botanical artist. Recognizing that most women’s education at that time did not include science or Latin, she wrote with that in mind, publishing titles such as Young Ladies Book of Botany (1838) and Instructions in Gardening for Ladies (1840—it sold 1,300 copies the first day). In 1842, she launched The Ladies Magazine of Gardening, which she edited.

Nevertheless, women were seen as physically too weak to garden professionally until the two world wars. With a national shortage of male gardeners and the urgent need for productive gardens (think Victory Gardens), women were hired. “However,” writes Willis, “as with the case of so many women’s wartime occupations, many female gardeners lost their jobs when peace returned.”

Dotted throughout the pages are Dave Hopkins amusing, Victorian style engravings. He depicts a happy plant explorer holding onto a branch while perched precariously on the face of a high cliff, reaching for a desirable specimen. To illustrate the chemical gardening essay, he portrays an early Victorian gentleman wearing a top hat but no protective clothing, unconcernedly spraying toxic chemicals on his prize roses. To illustrate the essay on aerial and vertical gardens, Hopkins juxtapositions a modern apartment building façade completely clothed in a jungle of mixed plants next to a bare faced Georgian edifice.

Well written and graced with Hopkins’ skillful, witty illustrations, The Compendium of Amazing Gardening Innovations’ one flaw is the tiny font size, making the book physically difficult and exhausting to read, particularly for people with aging eyes. One can imagine a bright young art director creating a beautifully designed book, unaware that around age 40, people’s eyes begin to grow less flexible, making it harder to read small print. A larger format—or better yet more pages since the book’s dimensions are comfortable and pleasing—would have allowed for a larger typeface.