In the Company of Patriots 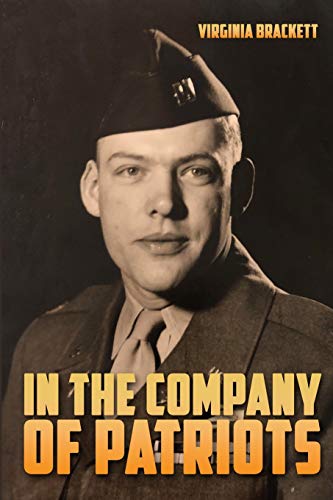 Edmund C. Roberts Jr., Captain US Army, was killed by a sniper’s bullet in Korea in 1951 when his youngest child was eight months old. This daughter had never seen the man and never would, but through the intervening decades the author’s desire to know him motivated an expedition to discover the man, the times, the people, the landscape, and the world of her father from the innocent days before the outbreak of WWII, to the turbulent but hopeful last days of WWII, to the sad days of the Korean War.

The book is an absorbing hybrid: a classical drama crossed with an archeological dig, only instead of pottery shards, burial mounds, and stone tools, it uses scrapbooks, newspaper clippings, letters, emails, and family lore to reveal a multi-generational personal history linking the past to the present.

The first act is drawn from the mother’s scrapbooks and immerses the reader in the delicate rituals, protocols, and practices observed by American midwestern youth in the late 1930s. The author’s scholarship and attention to detail are extraordinary as she, like an archeologist, uses a soft brush to gently sweep the historical dust away to reveal what now seems an ancient but genuinely wholesome world of courtship, and the social landscape in which it blossomed for her parents.

The second act starts with Pearl Harbor and follows her parents as they crisscross the country during her father’s military training, their separation after D-day, his capture by the Nazis in the Battle of the Bulge, his escape from a Nazi prison camp, his debriefing by General Patton, and ultimately his commendation from Patton for his actions. The author deftly weaves into the narrative the emotional swings experienced on the home front as her father went from Missing In Action (MIA) to Prisoner of War (POW) and ultimately to his escape and safe return at war’s end.

The final act begins in the all too brief period of peace between WWII and the Korean War: the family is reunited and living in their hometown with two children now, a civilian career, and eventually the father’s fateful decision to return to the army to pursue a military career shortly before the outbreak of the Korean War. The story then follows him through the Korean campaign, the victories and reversals, the birth of his third and last child—a child he would never see—the sniper’s bullet, his last command, and the aftermath of his death.

It is this final act that is the most moving as the reader is lead through official communiques, newspaper clippings, condolence letters, and personal conversations in which a passing comment at a church picnic ultimately sets the direction of the war widow and her three children for rest of their lives, “Our future was in large part determined by this single woman’s remark.”

The title is drawn from a fragmentary quote in a letter of condolence sent by the Secretary of the Army, “He has gone, however, in honor and in the company of patriots.” What the book reveals, and what most impacts and affects the author over the arc of the story, is the recognition and realization that the patriots are not just the ones who fell before, and beside, and after her father, but rather that it is the patriots who served with him in WWII and Korea, now in their 90s and nearing the end of their lives that remember her father and tell her about his character, his kindness, his leadership, and how he affected their lives.