In the Company of Others (The Mitford Years) 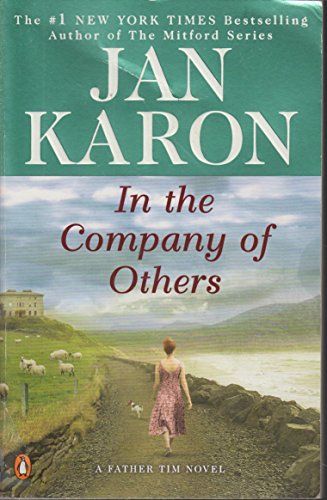 A book doesn’t always need action and crisis to be dramatic. Some, like Jan Karon’s latest novel, offer plenty of drama inside a small arena—in this case, an Irish inn, “in the company of others.”

All of Ms. Karon’s books are small in scope but large in content, concentrating on day-to-day relationships and the types of problems anyone can relate to. She makes it all interesting and heartwarming—or heartrending—without violence, profanity, disaster, or cruelty. Rather, a Jan Karon book in general, and a Father Tim book in particular, is about finding peace inside oneself and among one’s neighbors, and involves spiritual themes like redemption and forgiveness.

The main character, Father Tim, is an Episcopalian priest who has spent his life trying to live up to his calling. It’s an endless challenge that presents him with a huge range of human foibles and demands, successes and failures. He begins as a parish priest in the community of Mitford, North Carolina, covered by nine books that have earned millions of devoted readers. These volumes are structured like classic English “village novels,” focusing on daily life in small rural towns.

Ms. Karon finished that series and opened a new one to allow Father Tim to expand his horizons. So far, he seems to be exploring his roots. The first Father Tim book, Home to Holly Springs, took him back a generation to resolve critical questions of his childhood. This new book takes him another generation or two further into history, to Ireland, where he learns little of his ancestors but much about current residents and their families.

As with all series, it helps to have read the earlier volumes in order to recognize and understand references to people and events. This story does not depend on that knowledge, but it can make the experience even richer. Father Tim is a constant that allows the book to stand alone, although it differs in tone and some writing style from the others. The author, in fact, claims on the jacket: “Of all the novels I’ve written, In the Company of Others is my personal favorite, my dark-haired child.”

Thus, readers who want exactly what has come before may be dissatisfied. Those willing to travel anywhere with the good Father will welcome this story as Another Installment in the Continuing Adventures of Father Tim.

Perhaps that should be The Continuing Character Development of Father Tim, because in this book, as in its predecessors, he grows as a person through his interactions with others. Now 70, he’s still as naive and wondering as a child but as wise as a shaman. He has learned how to pray on the run and to realize that his work as a priest is never done and has no physical boundaries. Also, that his work revolves around one criterion: to be there when people need him. “Listening is one of my job requirements,” he tells a troubled soul.

In the same scene he reassures the person, “I happen to like stories of other people’s lives.” Such stories are what build Ms. Karon’s series, creating quiet drama that keeps one turning pages. The innkeeper offers insight on why we’re attracted to these stories, as well as provides the book’s title and captures the essence of Father Tim’s calling:

“There’s never any privacy, really, in keeping an inn, even when one lies in one’s own bed. Personal life and possessions are so blended into the business, there’s no telling where one stops and the other begins. One is ever in the company of others. . . . But it’s what we love, of course, and one pays a price always for what is loved.”

The novel is woven around such truisms and includes moments of instruction on what it means to comport oneself as a priest as well as a person in everyday life. In a passing conversation with a minor character, Father Tim “offered the smile he relied on when parishioners commented on his sermon and he realized they’d heard something entirely different from what he’d said.”

Yet he passes no judgment, just moves on, finding a silver lining even when sorely tried by a difficult customer. His real power comes in longer dialogues wherein he helps others tackle life-disturbing problems. These scenes are the most religious in flavor, but Ms. Karon has a gift for presenting Christian principles and beliefs in a universal tone. Father Tim’s gift is to address spiritual concepts pragmatically. When one tortured parent asks Father Tim how he broke through the wall erected by his own adopted child, the Father says:

“Love must be a kind of discipline. If we love only with our feelings, we’re sunk—we may feel love one day and something quite other the next. Soon after he came to live with me . . . I realized I must learn to love with my will, not my feelings. I had to love him when he threw his shoe at the wall and cussed my dog, love him when he called me names I won’t repeat, love him when he refused to eat what I’d cooked after celebrating and preaching at three Sunday services . . . so I enjoyed the warm feelings, the stuff of the heart, when it was present between us, as it sometimes was, even in the beginning. And when it wasn’t, there was the will to love him, something like . . . a generator kicking in, a backup.

“I learned over a long period of trial and error to see in him what God made him to be. Wounded people use a lot of smoke and mirrors, they thrust the bitterness and rage out there like a shield. Then it becomes their banner, and finally, their weapon. But I stopped falling for the bitterness and rage. I didn’t stop knowing it was there—and there for a very good reason—but I stopped taking the bullet for it. With God’s help, I was able to start seeing through the smoke. I saw how bright he was . . . how talented, and possible it was for him to triumph over so much that hounded him.”

Good advice for all of us in how to deal with broken people. Father Tim counsels similarly in a discussion about loving a harsh parent: “The grace to forgive [his father] had literally saved his life . . . What he hadn’t known was that it would have to be done again and again over the years. A nuisance, really, like the continuous labor required to keep a garden from running wild, or a bed made, or a machine oiled. Most often, the forgiving of his father had demanded an act of sheer will, there was nothing sappy or sentimental about forgiving a bitter wound, one had to go at it head down.”

Through such micro-sermons Father Tim muddles his way through a life of service, all while dealing with age and diabetes, with a wife and a large dog, an extended family, and everything else that comprises reality.

Through reading In the Company of Others, one feels immersed in that company and shares its benefits. People who start with this volume will, upon finishing it, likely head to the nearest library or bookstore to gobble up the Mitford series; people who’ve read them all will sigh and drum their fingers on the table, waiting for the next installment.