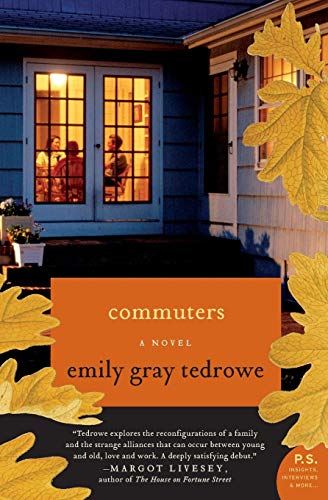 This is the first novel by Emily Gray Tedrowe and it may gain her admission into the club of today’s best women writers. At one point in Commuters, a character goes on vacation and takes with her “a satisfyingly quiet Anne Tyler novel.” Anne Tyler, Anna Quindlen, and Jennifer Weiner are just three of the popular authors whose influence can be observed in Commuters.

Commuters deals with the lives of individuals who, while they live in a quiet one-square-mile suburb, are only a train ride away from the hustle and bustle of Manhattan. It is also about the way people’s lives change—sometimes instantly—when their partners and family members experience tragedy or opportunity.

The story begins with the marriage of seventy-eight-year-old Winnie Easton to Jerry Trevis, a wealthy businessman from Chicago. Winnie and Jerry (a widow and widower) had met once while both were in their twenties, attending a wedding, and now each is taking a chance on this late in life pairing.   For Winnie, the act of getting married to Jerry may be her first taste of true freedom: “She had married once because it was a good match, mostly for her parents and his. . . . But now she found herself about to do something that felt like the first thing she’d ever done on her own. . . . She was marrying a man for the delicious and wicked and simple reason that she wanted to.”

Winnie and Jerry’s children, grandchildren and in-laws all, of course, have their own strong opinions about the wisdom of their joining together for better or worse. In Commuters, the story is told from Winnie’s viewpoint; from that of her distracted and tired daughter Rachel (whose one-time lawyer husband has recovered from a serious accident); from the perspective of her angry daughter-in-law Annette who views Winnie as an opportunistic gold-digger; and from the perspective of Avery, Jerry’s troubled grandson.

Each of these individuals has hopes and dreams—Jerry for example wants to be the owner-chef of his own restaurant in Brooklyn—which may rely, in part, on securing some of Jerry’s fortune via inheritance. Winnie becomes a wild card thrown into the game that forces everyone to scramble and re-evaluate their positions vis-à-vis Jerry. The well-planned timetables for getting on Jerry’s good side are now thrown out of whack; even more so when Annette elects to sue her father for the control of his business and Jerry’s mental and physical health begins to fade.

Tedrowe does a remarkable job of telling this story from four different perspectives. All sound like true voices and a wrong note is never heard. The author incorporates a couple of sex scenes in a way that is subtle, unlike so many of today’s popular fiction writers who drop in such scenes in an attempt to enliven boring narratives.

Each of the narrators in Commuters encounters either unexpected opportunity or tragedy, regardless of their age, maturity or economic standing in life. This novel informs us that dealing with family and dealing with money are two equal challenges.   And then there’s the matter of love, which does always win in the end.

Commuters also tells us that we’re seeing the emergence of a great new talent in Tedrowe. Let us hope that she keeps up her craft. If so, her name may one day be mentioned alongside that of another highly gifted writer, Anne Lamott.

Reviewer Joseph Arellano has worked as a government Public Information Officer, and has done pre-publication review and editing work for a publisher based in England. His book critiques have appeared in several publications including San Francisco Book Review.