Committed: Dispatches from a Psychiatrist in Training 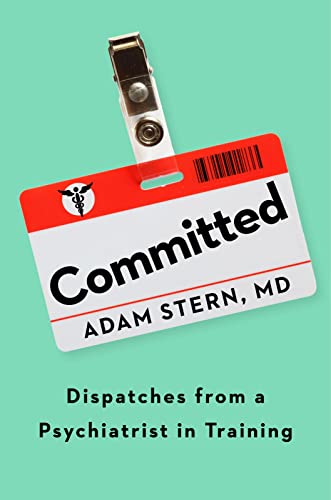 How does one become a psychiatrist? How can anyone understand what makes another person tick? Those are the questions this memoir—the story of how Adam Stern trained for and ultimately became a psychiatrist—tries to answer.

We meet the fledgling Dr. Stern as he matches from a nondescript New York state medical hospital into a residency at Harvard Medical School. He can hardly believe it himself and wonders if it isn’t some type of mistake.

“Everyone around me at the new program was so bright and already accomplished that I didn’t see myself belonging. I felt like an imposter,” Stern writes.

This is just the first in a series of annoying humble brags that permeate this book. It’s a form of self-deprecating humor except that it’s not self-deprecating and, come to think of it, it’s not really humor, either. Dr. Stern sets himself up time and again with thoughts of inadequacy and, when he succeeds, we’re supposed to be as surprised as he is.

Except we’re not. Dr. Stern’s father and brother are doctors, and he is from a well-off, white family on Long Island. He has every advantage society can bestow and seems to the manor born. His story ain’t exactly The Coal Miner’s Daughter.

That’s not to say this memoir is without merit. Dr. Stern’s humanity and his ability to write about his suffering patients saves the day and makes the memoir an intellectual page-turner.

It is illuminating (and maybe a little unsettling) to know that, even in as prestigious a medical school as Harvard, the recruits go in understanding very little about their chosen field and learn by doing. Almost like a car mechanic. And when the book succeeds, it’s because Dr. Stern writes humanely about his interactions with patients such as Jane, who suffers from anorexia nervosa.

Dr. Stern engages with her very early in his residency, and we can feel his inadequacy when she tells him “I don’t want to die.”

“All of the responses my mind went to were wrong. You’re going to be okay. We’ll find a way through this. It’s all right. In real life, if Jane were a friend, I’d give her a hug, but that couldn’t be the way of a psychiatrist.

“I leaned forward and connected with her eyes. ‘I know,’ I said.

“That was all I had, but in the moment it was enough. We sat quietly together for a long time and eventually my pager went off.

“Turning my back to her and leaving the room felt wrong in my gut, but still I did it.”

It would be a spoiler to relate what ultimately happens with Jane, but she does reappear later in Dr. Stern’s residency.

Because this is a memoir and not only an essay about how to become a psychiatrist, Dr. Stern regales us with tales of his dating adventures and love life. How you feel about him after reading how he interacts with various women will make you empathize with his Joe Schmo behavior or make you think his ancestors were the first nebbishes to walk the earth.

Toward the end of the book, Dr. Stern asks himself the ultimate question everyone wonders about the field of psychiatry: Is this entire field some kind of made-up sham? It does not have the precision of other medical specialties and largely depends on what the patient answers when the doctor asks, “What do you think?”

It’s not for nothing that a favorite line among budding psychiatrists is: “Don’t just sit there. Do nothing.”

It’s largely a listening disciple. Does that make it medicine? The job seems impossible, and this memoir does little to convince the reader that, yes, these guys really know what they’re doing. On the contrary, it’s easy to come away from this memoir wondering if, instead of spending all that money on therapy, one might be just as well served heading to a nearby bar to hear the wisdom of barstool gurus.

In the end, Stern settles for small victories and rationalizes that whether his patients continue suffering or even die, he can take succor in knowing he helped a little bit. Then again, maybe not. Maybe we require a little more from our doctors.