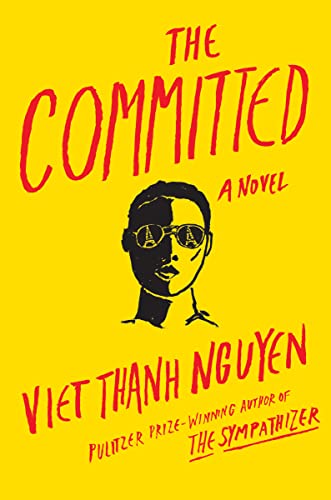 “Readers eagerly await more from a writer whose finger is on the pulse of the 21st century. His project is key for our time: reckoning with the tragic colonial history of previous centuries and our own.”

History repeats itself, “first as tragedy, then as farce,” according to Marx. Viet Thanh Nguyen follows his tragic first novel, The Sympathizer, with a hilarious, terrifying farce. In The Committed, no one escapes satire; the biggest target is colonialism.

The ghosts of The Sympathizer loom large for the narrator, the sympathizer himself. Here he is called, in addition to “crazy bastard,” Vo Dhang, “no name.” Throughout The Committed, Nguyen revisits events in the earlier story.

The fast-paced action in The Committed puts the narrator-protagonist in constant motion. His sphere is a few sites in Paris, depicted more as a place of darkness than the City of Light: “the worst Asian restaurant in Paris,” a brothel, a deserted warehouse.

The main characters are drug dealers, gangsters, and prostitutes, seeking money for survival; they come from former French colonies, mostly Vietnam and Algeria. Some suffer torture and death. Meanwhile, white Parisians exploit them while spouting anti-colonial theory and without dirtying their beautiful clothes.

Reading this novel induces both delight and displeasure, which are strangely linked. Nguyen performs tours de force in writing about pain, for example in a six-page sentence about a deadly fight.

At first, it is hard to know how to read the book’s tone. Are the footnotes citing French theory serious or satiric? Soon the answer is clear: both. The book is both deadly serious and comic, for the mind of the narrator, as he says repeatedly, is split. Like Yossarian in Catch-22, he is the sane participant-observer of an insane world, where everything means its opposite. In the imperialist lie, colonization is enlightenment.

The Sympathizer, a story of Communist and anti-Communist spies, provided twist after twist of double agency. In this book, the sympathizer becomes literally a double agent. The split in his identity begins with his dual Vietnamese French parentage. Communist/capitalist, friend/betrayer: a series of dichotomies swirl through his mind, which he describes as held together only by a screw. In one frightening sequence when he is beaten, he feels his brain literally coming apart.

Nguyen integrates depiction of individual and communal pain with the theory that tries to make sense of them. The book’s most vivid setting is the narrator’s mind, liable to separate into two parts but furnished with memories, feelings, and ideas. Theory becomes the tenuous bridge between the narrator’s selves.

The book features impressive verbal pyrotechnics: puns high and low and witty turns of phrase. Passages often conclude with tragic insights:  “. . . in a world divided between the body and the mind, we Vietnamese were ruled by our bodies, which was why the French could rule us with their minds. From Voltaire, I learned that it was best to tend to my own garden, which might mean many things, but when taught to us by the French meant to mind our own business and be happy with our little plots, while the French took care of our entire colony and inflicted Candide-like horrors on us.” Another operatic passage concludes “Who said words couldn’t kill? But I had not known the power of my words, or so I had told myself. I knew their power now, although I also knew that the only thing more powerful than words was silence.”

The heart-rending tragedy of The Sympathizer, however, is not invoked here until the last chapter. The world seems so absurd to the narrator that his emotions are blunted. He often claims he is dead, and ghosts from the previous book haunt him. The fast pace of the narrative means some characters are briefly sketched; most lack real names, though that is part of the point.

This uncompromising satire is reminiscent of Swift’s Gulliver’s Travels. Like Swift, whose portrayal of sub-human Yahoos veers close to stereotyped portrayals of his own people, the Irish, Nguyen occasionally engages in stereotyping: of Japanese people when the narrator disguises himself as a “typical Japanese tourist”; of Jewish people when he conflates French public intellectual Bernard-Henri Levy or BHL, here called BFD, with the notorious Dominique-Strauss Kahn. The knife edge of satire can be sharp.

Nonetheless, while Swift, according to his epitaph, “has gone where fierce indignation can lacerate his heart no more,” Nguyen continues to lacerate his heart, sensitive to all forms of injustice, by writing as a means of both protest and illumination. According to Alexandra Alter in the New York Times (2/21/21), where Nguyen contributes trenchant op-eds, he is working on a third novel about the sympathizer and a memoir. Readers eagerly await more from a writer whose finger is on the pulse of the 21st century. His project is key for our time: reckoning with the tragic colonial history of previous centuries and our own.