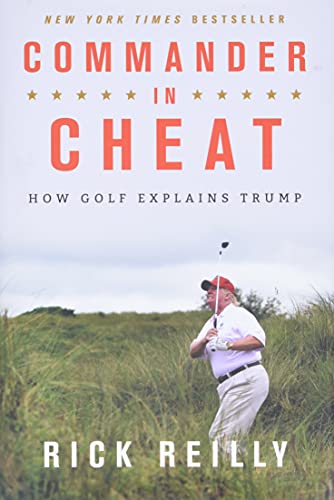 “One can only imagine what the publication of Commander in Cheat will produce on the president’s Twitter feed. Rick Reilly has hit Donald Trump in a place that should push all his buttons on a subject extremely important to him. It promises to be quite a spectacle.”

In the past two years, there have been upward of 25 books dealing with the current president of the United States. Some of them offer praise, some offer criticism, and a few seek understanding. Some focus on the businessman, some on the politician, some on the celebrity. This latest addition to the Trump bibliography seeks understanding by concentrating on Trump’s obsession with golf. He plays golf more than any president has. He buys, builds, and operates golf courses. Reilly writes that Trump brags about them, sues over them, lies about them, and uses them as a means to bully friend and foe alike.

Rick Reilly was a writer for Sports Illustrated for many years, was voted National Sportswriter of the Year 11 times, and was noted for his biting humor. He comes from a family of devoted golfers who believe that the rules and ethics of golf are sacrosanct.

For the epigraph of Chapter I “The Big Lie,” Reilly quotes P. G. Woodhouse: “To find a man’s true character, play golf with him.” Reilly has done so, and, for this book, he has interviewed countless numbers of others who have played golf with Trump, both before and since he has become the president. “For golfers, the stain of cheating is so much graver than winning or losing that we live in mortal fear of being called a cheater,” writes Reilly.

Having set the stage, Reilly spends the remainder of this small volume detailing with hundreds of examples how Donald Trump is oblivious to the ethics of golf and driven by his other obsession, winning. This impacts and reflects his approach to so many other aspects of his life off the course, including all aspects of his presidential responsibilities.

If you are an ardent supporter of President Trump, you will either be enraged by Reilly’s revelations, or you will simply dismiss it all as “fake news.” Some may also want to “lock him up.” If you are firmly anti-Trump you will find your views of the president confirmed, and then some, on every page.

For those who are in neither of these camps, if they care enough to read Commander in Cheat, they will find themselves astounded by Trump’s golfing behavior and the ways in which golf colors all that he does. The piling up of anecdote after anecdote, episode after episode, the sheer volume of it all, is likely to overwhelm the average human.

Reilly describes Trump as a good golfer; while Trump allows that few people he plays with ever beat him. Given the fact that Trump moves his ball to get a better lie, takes numerous mulligans beyond any normal allowance, and takes a gimme from any distance, even from a sand trap, may account for Trump’s “winning.” Trump never has a bad lie because either his caddy or, more recently a member of the Secret Service moves or kicks Trump’s ball into a more favorable position. Trump’s shots that go into the water suddenly appear in the middle of the fairway. Of course, when necessary, Trump handles these tasks on his own. In short, whatever it takes to win, is what governs Trump’s golfing manners. It is never enough, claims Reilly, to play well. Winning is the ONLY thing!

Some of the more interesting tales are those involving Trump’s golf courses, all of which he claims are the very best. Many of his courses have led to confrontations with local populations as Trump demands total control of the area around and near his courses. In Scotland, he managed to alienate nearly the entire population of golf-mad citizens. He had a major tussle with Puerto Rican authorities as he left them holding a $33M debt, over which they had the temerity to object. Reilly thinks this may explain Trump’s indifference in the aftermath of hurricane Maria and his cavalier paper towel toss while visiting the island.

One of the most sacred places on a golf course is the green. Golfers tread lightly across the green, and golf bags are never laid down on them. Who would even think of driving their cart across a green? Donald Trump? This may be the most egregious thing he has done on a golf course, and he does it routinely. Reilly, and any golfer who has witnessed this violation, including Trump supporters, are horrified by it.

The stories roll on and on, and some roll by more than once. At times, it seems Reilly is piling on, but then each time a point is being made and, then, made again. If you are a close observer of Donald Trump and have some knowledge of his past, none of his behavior is surprising, although the sheer volume can make your head spin.

One can only imagine what the publication of Commander in Cheat will produce on the president’s Twitter feed. Rick Reilly has hit Donald Trump in a place that should push all his buttons on a subject extremely important to him. It promises to be quite a spectacle.