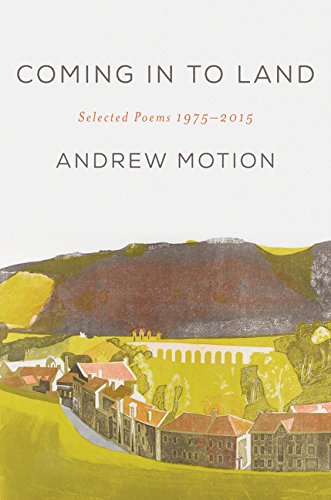 “Andrew Motion’s imagination takes him and readers on a journey to many places and times, but always with a sense of the inner self.”

The works of Andrew Motion, United Kingdom Poet Laureate (1999–2009) may not be familiar to American audiences, but they should be. He is also the biographer of poet Philip Larkin (1993) and author of the memoir In the Blood (2006) as well as two young adult novels. Currently he is Homewood Professor in the Arts at Johns Hopkins University. But the reason we should become familiar with his work is its masterful lyrical yet conversational style and its contemporary relevance.

The author declares his intentions: “I want my writing to be as clear as water. No ornate language; very few obvious tricks. I want readers to see all the way through its surfaces into the swamp. I want them to feel they’re in a world they thought they knew, but which turns out to be stranger, more charged, more disturbed than they realized.”

Nowhere is this more clear than his long award winning poem “Peace Talks,” a poetic construction of the actual words of veterans of the wars in Iraq and Afghanistan. Motion’s conversational style is perfect for moving these poems of war into a cry for peace.

In the section “Critical Care” we hear the nurse’s voice as she deals with a young man’s double amputation. It is graphic as she says to herself:

The explosion has driven
a whole load of sand
and mud and rubbish
up into the tissue planes,
and of course the bugs,
they’ve got in there,
and they love it.
They’ve got a lovely war moist wound . . .

While trying to soothe the young man, she pretends, “This is Mum, / Mum’s come to see you.” To herself and the world she confesses, “If you knew what there was in store for you/ you wouldn’t have children.”

When another soldier finds a child victim of a land mine, he attaches to the boy and sees that he gets some care; later learning the boy is a double amputee, he acknowledges for all how: “Everything is hard./ Everything they’ve got to do/ everywhere they’ve got to go. Just hard.” Such succinct bluntness is persuasive. It is reminiscent of the call that all legislators who vote on going to war should first visit a veteran’s hospital.

This and many other poems prove Motion the master of the persona poem. Taking on the voice and perspective of others is his favorite way of connecting us to the world, if not to himself. He is translating the world for us. In the long poem “Whale Music” he even takes on the persona of the whale.

In the beginning I found it very difficult to believe
I was in fact alive. Was I a creature of a country?
I decided creature, and at the same moment also
discovered my voice. It was not so much a form
of communication with others as a way of proving
I was alone in the world . . .

Nature proves to be a major subject and theme in its restorative power, as in his many sectioned “Of All Birds” poem.

Andrew Motion’s imagination takes him and readers on a journey to many places and times, but always with a sense of the inner self. There are poems of past wars, world places, romantic longings, and internal sufferings. Though many may appear dark in tone, Motion’s fundamental intention is clear: to bring us closer to sharing fully the human condition.