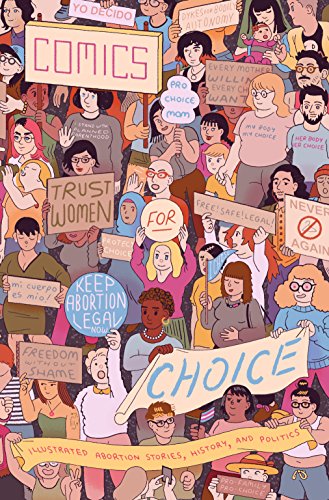 This collaborative collection of comics representing a variety of voices and experiences was sparked by the concern that under President Trump abortion rights and other aspects of Obamacare would be under threat. The voices raised include women—single, married, non-binary—who have had abortions for a variety of reasons: lack or failure of contraception, sexual violence, lack of conviction that maternity was the right way for them at a particular point in time. We also hear from politicians and reproductive rights activists, and health care professionals all working in perfect marriage with cartoonists who demonstrate the power of the medium for economic depiction of complex issues.

On our counting this publication contains 42 high-quality comic narratives that take a number of different approaches. Jennifer Camper gives us a stark one page of non-medical approaches to abortion which women have traditionally been forced to adopt from inserting a knitting needle in the uterus to falling off a roof. She is similarly economical with her two-pager of “ELEVEN in Memoriam: People Murdered in America by So-called Pro-Life Killers.”

Kriota Willberg gives us the philosophical and beautifully drawn “Body & Soul, Science & Religion: All Crowded into One Uterus,” which summarizes the different things women are told by Hindus, Sikhs, Christians, and Buddhists about the physical and spiritual milestones of embryological and fetal development concluding only, as many women must, that “life is certain and uncertain.”

A number of comics take a more purely autobiographical approach narrating the obstacles encountered between testing positive and obtaining an abortion, with varying levels of support from partners, friends and mothers in the process. Leah Hayes’ “Sometimes I Can’t Sleep” is outstanding here.

There is a lot of inspiring information as to how women have helped and continue to help themselves. The comic “Jane” (Rachel Wilson and Ally Shwed) on setting up a referral and counselling network which then blossomed into a fully illegal, and much appreciated abortion service is excellent, as is the much briefer “Plan C” (Nomi Kane and the Plan C Team) and the “Advice on Self Care After Your Abortion” by Rachel Hays.

Rickie Solinger and Rachel Merrill provide a chilling exposé of how women were treated in the anti-abortion trials pre-Roe v Wade in courtrooms all over the country “for having had the temerity to murder motherhood, the only true destiny for real women.”

And Hallie Jay Pope in “Undue Burdens: How Roe v Wade Continues to Fail Poor People” and Steph Kraft Sheley in “They Can’t Get That From Us” both show how the structure of the health care system, additional discriminatory rulings, and the appointment of anti-choice justices still make access to abortion services difficult or impossible for many women in the States despite that watershed ruling.

This is an important and timely collection that shows to best advantage that comics “have the power to connect with readers, challenge pre-conceived notions, increase knowledge, and ultimately tackle stigma.” The main challenge will be having the collection circulate beyond the already converted.