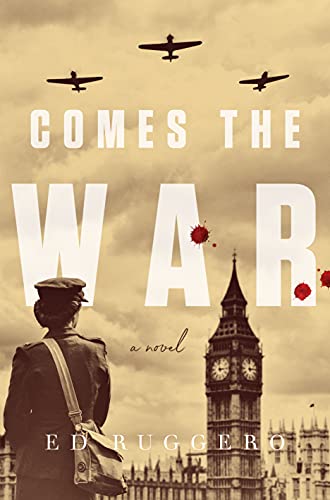 “Comes the War is a powerful, vivid evocation of wartime London.”

United States Army Lieutenant Eddie Harkins, fresh from a tumultuous adventure in Sicily, embarks on an assignment with the Office of Strategic Services (OSS), London Base, to serve as a spy catcher. Instead, fresh off the train from Scotland, his duffel bag still slung over his shoulder, he’s assigned to investigate a murder.

Helen Batchellor, an OSS analyst, has been found dead in an alley, her throat cut in what looks like a professional job. Was her murder connected to her work or was it personal, the result of a bad encounter in a nearby pub?

Harkins is assigned a British driver, Private Pamela Lowell, who reminds him of his younger sister. Together they canvass the area for possible witnesses, follow up on tenuous leads, and eventually discover a suspect. Harkins arrests him and throws him into the drunk tank to sober up, but at that point his investigation goes completely off the rails.

Ordered to back off, he presses forward. Assisted by the intrepid Private Lowell, Harkins embarks on a quixotic mission to prove his own suspect is innocent and to find the actual killer of an OSS analyst with access to military secrets and murky Soviet sources.

Comes the War is Ed Ruggero’s second historical thriller featuring Eddie Harkins, following up on Blame the Dead (2020). The author is a former U.S. Army officer with five other unrelated works of fiction to his credit and six publications focusing on Army leadership and World War II history.

As a novelist, Ruggero has developed a calm, uncluttered style of writing that’s very engaging and easy to read. Eddie Harkins is a likeable protagonist with all kinds of depth waiting to be explored, and Ruggero capably refers to the adventures of the first novel in such a way that we feel briefed on Harkins’s previous experiences without it mattering all that much to the action at hand.

His secondary characters are also well drawn, especially Private Lowell, who’s a great sidekick. She tries very hard to help follow the clues and read the tea leaves, but her constant exclusion by Harkins from interviews and sensitive conversations reminds us of the need-to-know world of military intelligence and the class differences between a British private and American officers.

Her strong feelings toward the enemy because of the loss of her family during the Blitz adds depth to her character, and the scene in which she scrawls their names on the side of a bomb that will be dropped over Germany is a poignant stroke. One can only hope we haven’t seen the last of her in this series.

Ruggero has also done an excellent job with the setting, dropping us into the middle of London while it’s still trying to recover from the devastation of the horrific enemy bombing raids of 1940 and 1941. The narrator evokes the look and feel of a war-torn city without making too big a deal of it, and as a result we feel that much closer to Harkins’s experiences as he moves through the streets of London and the surrounding countryside to conduct his investigation.

In the background, preparations for the D-Day invasion of Normandy provide a further source of suspense as the investigation continually leads Harkins into classified territory. At times we share his concern that the secret is just too big to conceal from the enemy, particularly with the Soviets deeply involved as a rather ambivalent ally.

The main problem with the novel occurs in the final third of the story as Ruggero begins to struggle a bit with his plot. He switches point of view away from Harkins more frequently in order to fill in details Harkins doesn’t seem to be able to uncover, and when the identity of Helen Batchellor’s murderer is finally revealed in a scene between two secondary characters with Harkins still beating the bushes, it feels very anti-climactic.

Nonetheless, Comes the War is a powerful, vivid evocation of wartime London as the OSS begins to move the United States into the world of military intelligence and the roots of the impending Cold War with the Soviets are planted. Readers of this one will be eagerly looking forward to the next installment.