The Comedians in Cars Getting Coffee Book 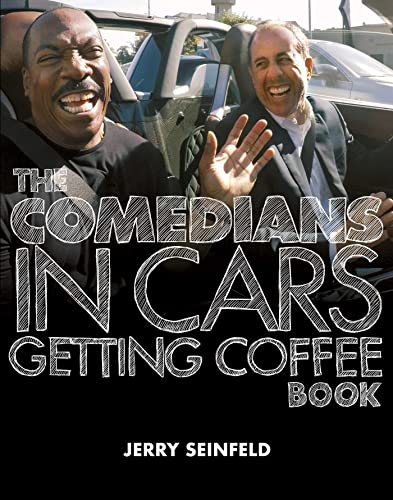 It’s not about the cars, and it’s not about the coffee. Jerry Seinfeld’s streaming show, Comedians in Cars Getting Coffee—the show and this book—may reflect the fact that he loves coffee and is a big car guy and Porsche collector. But the cars, cool though they may be, are mostly just eye candy. Instead, there’s a laser-like—and very entertaining—focus on the art of comedy.

Even when Seinfeld is sharing seat time with another comedian who’s even more of a car nut than he is—Jay Leno—they’re not talking engine displacement and model year changes in the Jaguar E-Type. That would be entertainment for only a few, and—this is critical—it wouldn’t be funny.

Let’s establish here that it’s Jerry Seinfeld’s name on the book, and it doesn’t read like something he phoned in with collaborators who get short shrift. Seinfeld has an intense work ethic and epic attention to detail, and every page of this book has his stamp on it.

Comedians in Cars is full of great jokes. These are, after all, world-class comedians, Garry Shandling, Larry David (of course), Leno, Eddie Murphy, Chris Rock, Tina Fey, Ricky Gervais, Sarah Silverman, plus many luminaries you’d know if you haunt comedy clubs—but although it’s coffee-table sized, it’s no laff-a-day coffee table book. Comedy is serious! And comedians are introverts, which you wouldn’t suspect. The book is a graduate-level seminar on amusement.

Here’s an Amy Schumer joke: Her friend Colin Quinn, who’s in her movie Trainwreck, sees a guy drive by with a beautiful woman in the passenger seat. Quinn says, “I would give it all up for that girl.” And Schumer says, “Give all what up?”

The late Bob Einstein (Marty Funkhouser on David’s Curb Your Enthusiasm) has the best one-liners in the book. Here’s one: A guy is crawling through the desert, reaches an oasis, and asks the merchant there for water. “I don’t have any water, but I can sell you a tie. There’s water at the inn three hours that way,” the merchant says. So the guy crawls off, but he’s back in six hours, still dying of thirst. “They wouldn’t let me in without a tie,” he says.

But seriously, folks, the book is mostly about the ineffable questions: What makes one story funny and the other one not? What kind of on-stage delivery works best? What’s it like to die on stage? What character attributes (or, for that matter, flaws) have to be in place to make someone a world-beating comedian? Will comedians turn anything into a joke (yes, including funerals). For that matter, who are the funniest comedians, ranked one to 10?

The book is in oral history form, dialogue excerpted from the show and grouped into broad categories: growing, up getting started, relationships, TV and movies, other comedians, food, family, music, money, the art of comedy. But it all circles back to the unnatural life of the professional comedian, die-hards who would work for free just to get the thrill of a live audience’s applause.

The series launched in 2012 and moved to Netflix in 2018 for its 10th season. The 11th season, from 2019, appears to be the last. “I think I’m going to put that volume on the shelf,” Seinfeld said in 2021, after having interviewed a long list of funny folks, including his idols. Don Rickles and Jerry Lewis got to celebrate their unique comedic art.

Missing in action: Woody Allen, Bill Cosby (a major influence on Seinfeld, but perhaps AWOL for obvious reasons, ditto Allen), Steven Wright, Tracey Ullman, Wanda Sykes, Tig Notaro, Mitch Hedberg, Eddie Izzard. Most of the other obvious candidates were not on for a very good reason—they were dead. Remember, nothing is sacred.

The book is a handsome, albeit weighty, production, with lovely layout and photography. A labor of love. The cars are there, but in the background. The classic automobiles (from Mercedes 300SL “Gullwing” and Porsche Carrera to Nissan Figaro and Fiat 500 surrey top) are a great combination of million-dollar classics and quirky oddities, and Seinfeld is obviously having a lot of fun driving them. Sometimes they break down, and that’s funny, too. Maybe that’s enough reason for just one more season.