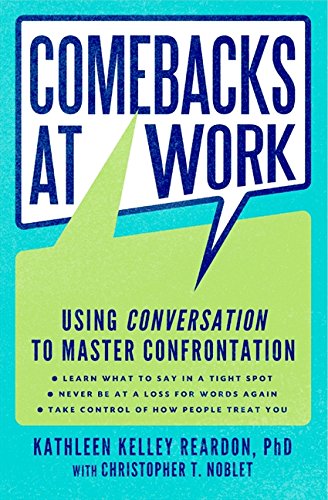 Have you ever thought of the perfect witty comeback to an insult several minutes after the moment has passed? The French have a saying for that phenomenon, “L’esprit de l’escalier” or “staircase wit.” The hope of Comebacks at Work is to reduce these occurrences and eventually replace them with appropriate and timely responses. For the most part, the book achieves its goal.

If there are any two authors that can accomplish this, Kathleen Kelley Reardon—a professor of management at the University of Southern California Marshall School and author of seven books, including the well-regarded The Secret Handshake—and editor, journalist, and speechwriter, Christopher T. Noblet, have the experience and ability to do it. Note that Reardon is the primary author and voice of the book.

On that point, she persuasively lays out a process on how to develop a sense of when and how to deliver the appropriate comeback starting with both an explanation as to why communication matters and a self-test of sorts where one can assess his or her “Baseline Comeback Skill.” Later chapters focus variously on the finer points of the comeback including overcoming “Brain Freeze” and dealing with situations where “Conflict Is Inevitable.”

Recognizing that everyone has a different style and temperament and that each situation is different, the author offers several possible responses to differing fact patterns, depending on the situation and the parties. Consider her possible answers for the following situation:

“I talked with Tim and he is not happy. He mentioned your part in the project’s failure. It doesn’t look good.”
Alteration—“I talked with him too and he was in a much better mood by then. But thanks for the heads-up.”
Reinterpretation—“We both know Tim is too smart not to realize that failure often precedes phenomenal success.”
General Observation—“Some days are clearly better than others, and the good news is that I know that” (said as you walk away).
Context Alteration—“If I were the only person he mentioned regarding the project, maybe I’d worry.”
Intention Revision—“Thanks for the tip. You’re always watching my back.”
Moving On—“What I want to know is: What’s for lunch?”

Looking at the sheer number of examples the author presents, it’s clear that she must have conducted a good deal of research and interviews to present situations with which many of us can identify. The one fault of the book, as a first edition, is that it comes across a bit like a first edition. That is to say, transitions are a bit choppy and some examples are discussed down to the minute detail while others are raised and quickly resolved. Still, there are few other books that deal with such an important topic and the author handles it well.

Finally, Reardon is savvy enough to realize that sometimes the best path is to simply let some things go, and she concludes the book with one final example in which she notes, “Better to bring the whole thing to a happy ending and move on. Some moments and some days are just like that and there’s no use making them worse.”