Come Over Come Over 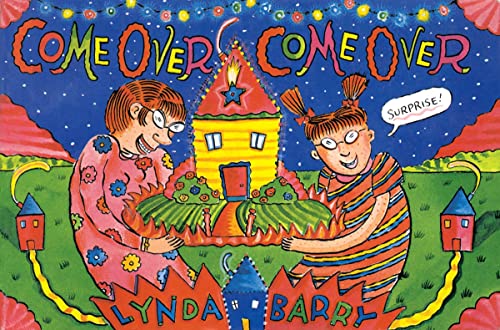 “Barry has a real genius for getting to the reality of middle-school kids . . . gritty, real, and deeply funny.”

Lynda Barry’s newest book is actually a collection of her vintage work from the 1990s, the Ernie Pook Comeek collection, featuring two sisters, Maybonne and Marlys. The stories are gritty, real, and deeply funny, an evocative look into the life of a young teenager, Maybonne, and her little sister Marlys. Despite belonging to a previous era, one before cellphones or social media, the characters are as recognizably real now as they were decades ago. There are descriptions of teachers, of family gatherings that feel completely current. Some things never change.

Barry is a master at cramming an entire world into a single strip, making vivid the agony of middle school and the mess families can be. “On Tuesday” lays out in four panels Maybonne’s struggle to be accepted and liked by a boy who is paying attention to her, something novel for her: “Does it equal he is my boyfriend?” The language that follows is direct and true to the character. Barry has a real genius for getting to the reality of middle-school kids, without any adult overlay tainting her characters. Her voice is always pitch perfect, as she captures both the agony and the glory of those years in crystalline details.

“Vacation Day” describes a long car trip, or at least the start of one, as Mom hustles her kids to pack and get into her brother’s car. The last panel is typical of the kind of unique sweet-sour mix that suffuses these stories:

“I have to admit, Uncle John is my favorite uncle, even though my mom does hate him for being my dad’s brother. ‘Mavis! Mavis!’ I hear him yelling. That’s my mother’s name. ‘Mavis! Come out here and say hello.’

“‘You tell him to go to hell.’ my mom says. ‘OK’ I say and I open the door and see Marlys in the front seat laughing and shoving Fritos in her mouth, and our whole street looking like it’s on beautiful fire.”

This kind of storytelling doesn’t feel dated. Both older readers, nostalgic for their own childhood, and younger readers, in the midst of their own middle-school turmoil, will find much to treasure in these pages. Here’s hoping there are more in Barry’s archives where this came from.