Come with Me: A Novel 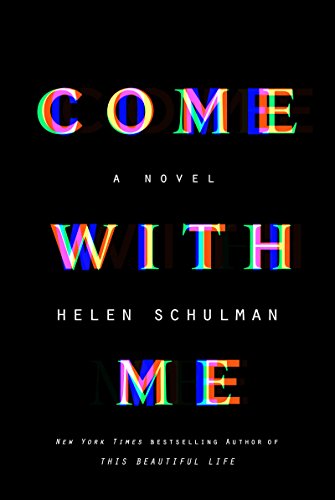 “Come with Me is almost a phenomenal book.”

Helen Schulman’s Come with Me swirls family tensions through the bright, clean-living streets of Palo Alto, California, where Silicon Valley and Stanford University intersect. Amy Reed (the protagonist, to the extent that Come with Me has one) balances three sons, an unemployed husband, an overly energetic dog, and a babysitting role as the lone adult in a tech startup run by her best friend’s son. Amy’s early morning runs offer the only private moments in a life overwhelmed by men’s needs.

Amy’s presence as an ostensible public relations officer in a company with nothing to relate to the public reflects the unstable role of the humanities in a culture and economy increasingly obsessed with wealth and technology. There’s a strongly gendered element at work here. Technology and its monetization are aggressively male; women and their odd attachments to communication and self-expression linger at the edges, just barely holding on, present only as den-mothers and caretakers.

Both Amy and her inert husband Dan began their careers as writers. Dan spent years as a journalist, but since his layoff, he’s fallen into emotional hibernation. He might be home, but there’s no homemaking. Summoned to retrieve their bewildered youngest son from a bullying-driven fight, Dan immediately surrenders all emotional responsibility, telling the eight year old, “Sometimes I don’t know how to be your dad.”

The narrative point of view shifts from character to character, revealing a life that’s still somehow middle class, but far from satisfying. Dan and Amy wonder, What series of decisions could have led them to this state?

Amy’s boss Donny considers the same question with all the emotionally-stunted curiosity of a child-scientist preparing to vivisect a captured butterfly. In response, he proposes alternate universes as a knowable property: “There’s an algorithm for anything. From now on in, it’s all aggregation of information, plus math.” And anything that can be controlled by algorithm, he’s sure, can be monetized.

Donny creates an amorphous program that gives Amy visions of her alternate lives. Some versions of her existence manifest small but traumatic changes in otherwise ordinary moments of the past: Instead of listening to her and stopping his headlong rush, her youngest darts into traffic and is struck by a car. Other changes are huge: Amy’s brother doesn’t die, she meets her husband at a different moment, an earlier relationship doesn’t fail.

Donny’s creation and Amy’s horror at it reflect a crucial disconnect in tech culture. Teenagers imagine new possibilities for exploiting information, since it’s all already present, ready for their manipulation. Older adults, people who have experienced trauma and survived it, recoil in horror. One group sees no moral implication in their experimentation. The other screams in agony.

Come with Me steps up to the edge of intelligent, necessary commentary on the emotional exploitation at the heart of Silicon Valley, but then turns aside in favor of domestic drama. That drama, turning on the fates of teenaged children, is ultimately unsatisfying. A young man on the edge of adulthood kills himself. Technology and social media are somehow complicit, but how is unclear. The relationship between Amy’s eldest son and his long-distance girlfriend is vivid and moving, but this other, intersecting path is effaced.

Some of this absence of clarity may be a result of adult characters who don’t grasp the technology enough to comprehend its consequences, but the gap in comprehension transmits from characters to readers. No one quite understands, and the space of non-understanding is an emotional lacuna.

Come with Me is almost a phenomenal book. The human relationships to which Schulman gives her full attention are vivid and moving. The book feels so full of potential and wonder, hurtling toward imminent revelation, then it collapses into a domestic drama too easily resolved. If it were a longer book, and a braver one, that sudden braking might be avoided, and we might learn the thing that remains just beyond Come with Me’s pages, demanding to be known but never revealing itself.