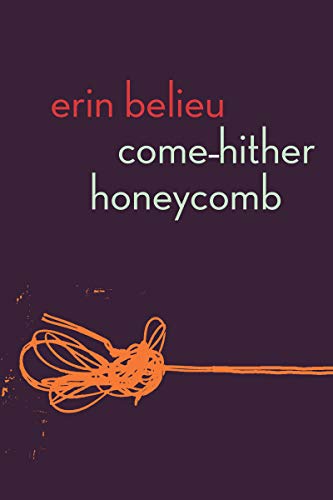 Frequently, the opening poem of a collection provides the reader with knowledge of how to read the collection. Such is the case with Erin Belieu’s fifth book of poetry, Come-Hither Honeycomb.

The speaker of her opening poem, the villanelle, “Instructions for the Hostage,” ruminates on the many ways in which we can hold ourselves prisoner (or hostage) by our own making. Addressing the reader, the speaker tells us, “You must accept the door is never shut./You’re always free to leave at any time,/though the hostage will remain, no matter what.”

Like Stockholm syndrome, wherein hostages tend to develop a psychological connection (usually positive) to their captors, the speakers in these poems reflect a duality—at times resisting their captor, at times willing to remain hostage (or unable to do escape it).

The villanelle is the perfect form to complement Belieu’s topic, as repetition of particular lines, dictated by the poetic form, is, in itself, an obsession—with a problem or situation that has no resolution. The villanelle allows the speaker to dig more deeply into a topic by looking at it from different perspectives, and because there is no resolution, the speaker remains trapped inside both the poem and the situation.

The theme of being taken or held hostage though the door remains open continues with the second poem, “Loser Bait.” Even as we fancy ourselves, “more/flattered—no ugly worm! . . . Didn’t I . . . L eave the [trap] trip lying obvious/in the tall, buggy grass?” The speaker wants to be found, be it by Satan, the IRS, or, even if we are “a one-man performance/wherein the actor hates his audience.”

Again and again, the speakers imagine themselves trapped, even, as in “Your Failure,” in her own house: “. . . who think a house the image of/escape, despite how clear the world. . . . And, in “In Airports,” one of the most ambitious poems in the collection, due to its spacing and the repetition of key words, acting almost as the villanelle to provide the reader the sensation of the anonymity and sadness of being in an airport, framed by “. . . always the weather in airports . . .”

The title of the collection provides another entry into many of these poems. As an adjective, the phrase come-hither, means inviting or enticing. Read this way the book title is beckoning the honeycomb in a provocative way. The honeycomb is the one doing the beckoning. Read another way, and it is worth contemplating that the author likely intended for a double interpretation, the title suggests that the speaker of these poems is asking, perhaps daring the honeycomb to come here. Either way as adjective or adverb, why honeycomb? It is intricate, sticky, sweet, potentially dangerous, but a home, nonetheless.

As Belieu inserts the metaphor of entrapment frequently throughout this collection, so does she use images and sounds of bees either explicitly or implicitly. In “In Airports,” strangers in the airport and ghosts on trains are both “buzzing,” as though swarming around each other, perhaps alighting here and there. The speaker of “The Man Who Fills In Space,” “. . . is growing weightless,/churlish, lapsing into sulks, as the bees/that work inside him plot more often . . .”

In addition to metaphor and simile, Belieu uses spacing between words intentionally—for attention, for a pause, a breath longer than a line break. The title, “Please Forgive Me    All That I Have Ruined—,” causes the reader to take note. Why the space after “Me?” Why italics? The speaker reflects on the dichotomy of some “messages from the universe,” which can instill both fear (the speaker’s panic at losing a child in a store) but also freedom (that in those moments of “invisibility,” her son was freed from the “flaming dirigible/of my fear”). The speaker in this poem continues to call fear to mind: “Like the cassowary,/at the dumpy Miami zoo.” The speaker envies this frightening large bird, similar to an ostrich, which can attack and can kill humans “when provoked/to unzip the human body like a duffel bag.” But by poem’s end the speaker recognizes that as she’s aged, she has lost what she calls the “gift” of, like the cassowary, lives only for itself, of being “complete    unto   itself” (spacing intentional).

The collection is not without humor. The speaker of “The Man Who Fills In Space” lists the many familiar items this man “fashions for his temple—“: “pillars made from leisure magazines,/. . . the treasure of his mother’s/broken Seal-a-Meal—.” In this same poem, the man regards the bees as somewhat mystical, as he “drinks to make the bees return,” which, by poem’s end may or may not have been responsible for him considering the sadness of the moon, which, in spite of an astronaut having left a very tiny pin there, still experiences the “sharp prick” of aloneness.

The theme of resisting the norm appears again and again in these poems. The young speaker of “Sundays” rejects the crucifixion story she hears in church. Contemplating the “sad man with his sorrows,” she decides “it was only a father who’d do that to a kid and call it a lesson,” then climbs higher and higher into the thin branches of a beech tree, “where a girl could be redeemed,/. . . sewing herself into/what anyone who really looked could see was something true./. . . knowing no one could reach her.”

And while many pieces in this collection reflect on regrets or things that trap the speaker, the last poem, “She Returns to the Water,” offers hope. Reflecting on her past as a competitive diver, the speaker reminisces: “many years/later, while swimming/naked in her wealthy/landlord’s pool . . . in which she’s turned/her strange and aging/body loose/. . . while trying to recall/the exact last/moment of her girlhood— . . . (the woman climbing/from the water now)/like the silvery tissue/hiding a costly/gift.”

Susan Bucci Mockler’s poetry has appeared in the Maximum Tilt Anthology, Pilgrimage Press, Crab Orchard Review, and Poet Lore,  among others. She is also the author of Noisy Souls, a chapbook of poetry and teaches at universities in Arlington, VA, and Washington, D.C.