Colorization: One Hundred Years of Black Films in a White World 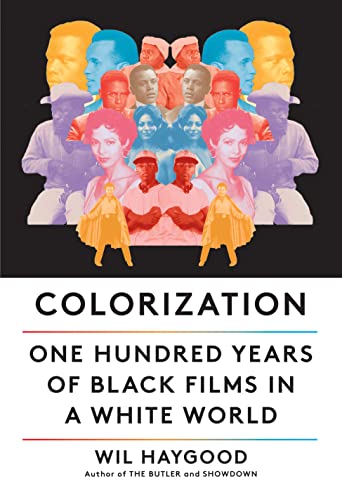 “Colorization teems with great stories of Black cinematic struggles and triumphs that bring a century of Hollywood outrages and inroads vividly and fearlessly to life.”

Colorization, a well-constructed and deeply engaging chronicle of “100 years of Black Movies” by Wil Haygood, breaks significant new ground in that takes in the full sweep of on-screen portrayals of Black Americans (sometimes by Black American filmmakers, sometimes not), spanning years beyond other indispensable accounts, such as Ed Guerrero’s Framing Blackness and Donald Bogle’s Toms, Coons, Mulattoes, Mammies & Bucks.

Although written for a broader audience than the comparatively academic Framing Blackness, Colorization bears some strong structural similarities to Guerrero’s monograph, focusing on many of the same milestones in African American cinematic history, and the ways the images of Black Americans projected on-screen reflected and shaped the Black experience. Both books recognize as signposts the catastrophic and degrading misrepresentations of the presidentially sanctioned Birth of a Nation (1915), which almost single-handedly invented a new type of cinema and a revitalized the Ku Klux Klan; the majestic Gone with the Wind (1939), which brought unprecedented visibility to Black actors like the Oscar-winning Hattie McDaniel, while canonizing ugly and fraudulent stereotypes in the roles they played, and the film’s whitewashing glorification of the antebellum South; and the hard-earned acclaim accorded to multiple Oscar winner Sidney Poitier in the 1960s, even as it seemed to come at the expense of recognition for other Black performers, and as nearly the entire decade passed without a single Black-directed Hollywood film.

Both books (particularly Haygood’s) really pick up speed as they recount the stranger-than-fiction genesis and explosive success of Melvin Van Peebles’ Sweet Sweetback’s Baadasssss Song, and the brief but exhilarating heyday of Black action films that followed in its wake. And both books pay close attention to the late-’80s rise of Spike Lee and other brilliant Black directors of the era, such as John Singleton and Robert Townsend, who arguably repeated not only Van Peebles’ low-budget/proportionately high-reward formula, but also the promise of authentic and independent Black voices in American cinema suggested by Sweet Sweetback, but not always fulfilled in the blaxploitation era that followed it, sometimes in dubious service of a Black audience perpetually (in Haygood’s phrase) “desperate for narratives depicting their lives.”

What largely separates the two books is Haygood’s narrative-centric approach. Colorization teems with great stories of Black cinematic struggles and triumphs that bring a century of Hollywood outrages and inroads vividly and fearlessly to life. In its reliance on Haygood’s marvelous storytelling talents, Colorization more closely resembles Bogle’s character-driven Bright Boulevards, Bold Dreams: The Story of Black Hollywood. If Haygood’s version of the Sweet Sweetback story is the one that jumps most exuberantly off the page, it’s in terrific company alongside a beautifully rendered account of the life and career of the first great Black filmmaker, pioneering producer/director Oscar Micheaux, who “embarked on a dream no Black man had previously dreamed: he was going to write and direct a string of movies, and he was going to market them, all in segregated America.”

With his work sometimes compared in contemporary reviews in the Black press to Uncle Tom’s Cabin, representing Black oppression in mild and measured tones, Micheaux’s films were hardly clarion calls to revolution, but the simple fact of a Black man bringing Black stories to the screen beginning with the autobiographical The Homesteader in 1919—four years after Birth of a Nation—was itself revolutionary. As Haygood writes, “He had come into Black filmmaking when it hardly existed, creating much of its origins and giving it ballast and a heartbeat. What D. W. Griffith had drilled into the minds of white America—that Blacks were untrustworthy and devoid of humanity—Oscar Micheaux tried to undo.”

Haygood also describes the dazzling rise and tragic fall of 1950s Black actress Dorothy Dandridge, and devotes a particularly fascinating chapter to the parallel lives, career arcs, and close friendship of Black America’s two most recognized mid-century crossover stars, Harry Belafonte and Sidney Poitier, as well as the lesser-known James Edwards, whose promising career went into freefall after he refused to name names when called before the House Committee on Un-American Activities in 1952. Always effectively connecting the threads of his narrative, Haygood gives Poitier the last word on Edwards’ significance: “All young Negro actors today owe him a debt of gratitude because it was Jimmy Edwards who started the employment situation outside the old stereotype with his performance in Home of the Brave. As a matter of fact, the opportunities that came my way were a direct result of Jimmy Edwards’ work in Home of the Brave.”

Haygood relies on a number of expert commentators, among them Louis Gossett Jr., whose invaluable perspective drawn from a long and varied career in film and television emerges expertly from Haygood’s interviews with the venerable actor. But no voice more ably serves Colorization’s mission than that of 20th century America’s most consistently incisive and penetrating observer, James Baldwin, who appears repeatedly throughout the book, always with an impeccably chosen comment. Baldwin’s insights echo profoundly throughout the book, never more so than in summer 1968, when Hollywood’s cowardly and self-congratulatory portrayal of race relations in Guess Who’s Coming to Dinner stood in stark contrast to the uprisings and conflagrations roiling American cities: “The industry is compelled, given the way it is built, to present to the American people a self-perpetuating fantasy of American life.”

Ultimately—and not surprisingly—the starkest and most illuminating difference between Colorization and Framing Blackness comes in the authors’ portrayal of what, in 1993, Guerrero too-optimistically referred to as “The New Black Movie Boom.” Framing Blackness concludes, somewhat triumphantly, with Spike Lee’s Malcolm X—a landmark film that should have swept the Oscars and ended the century on a high note not just for Black directors and actors but for all of American filmmaking, and affirmed the power of cinema to represent momentous, complex, and controversial lives for large and diverse audiences.

Thirty years later, to portray the brief heyday of Lee, Singleton, and others in that era as a transforming moment that leveled the playing field and ushered in some sort of idyllic post-racial Hollywood would be absurd. To be fair, Guerrero never suggested that it would, but what seemed a “Black Movie Boom” in 1993 proved a boomlet or bump at best.

Accordingly, Haygood (after an excellent chapter on Spike Lee) deepens and extends the narrative through all of the ups and downs of the first two decades of the 21st century, from the #OscarsSoWhite controversy to mounting outrage over Hollywood’s addiction to “the white-savior theme in films purportedly about Blacks,” to another identifiable upsurge in bringing Black stories to the screen that he traces to the aftermath of Barack Obama’s election in 2008 and re-election in 2012. He highlights films as varied as Twelve Years a Slave, Dear White People, Get Out, Moonlight, Black Panther, and Selma, never glossing over the irony that the first honest, Black-made film about the bloody, protracted, and ultimately successful struggle for voting rights in America was midway through production when Shelby County v. Holder (2013) gutted the 1965 Voting Rights Act whose passage the film portrayed.

Ultimately, bringing the story all the way into our current historical moment, Colorization goes to a place no earlier book on Black cinema in America could have possibly gone: reporting that the most impactful film of 2020 was shot not in Hollywood but in Minneapolis, not on a movie camera but on an iPhone, as it captured the brutal murder of a defenseless Black man, George Floyd, with his neck under the knee of white policeman Derek Chauvin.

“Black artists have struggled, since movies first began,” Haygood concludes, “to grab hold of the storyline, investing, when they could, a more honest narrative. But even the most creative minds could not have imagined the potency of the films of slain victims of police brutality, seen by the entire world when movie theatres were shuttered because of a health pandemic. In their own way, those homemade films swept into the silt of a restless nation . . . demanding of a nation that it look, full on and unblinkingly, at what it had done, good and bad, with the magic of its camera machinery.”