The Color of Night 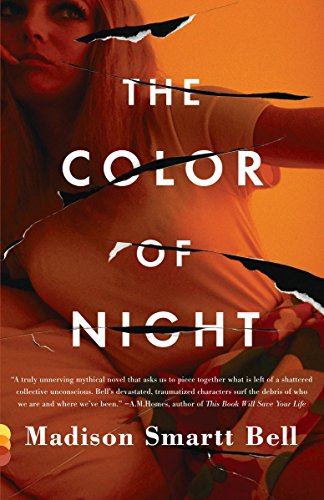 The publisher is billing Madison Smartt Bell’s latest novel as a “taut, terrifying tale,” and one that “will appeal to readers of James Ellroy and Cormac McCarthy.” That brought two problems to bear immediately. First, the last thing I want when I read a novel is to be terrified.

Second, while I am a big fan of James Ellroy’s fiction (especially American Tabloid), I am a Cormac McCarthy apostate. I find his novels (the two that I have forced myself to read, that is—Blood Meridian and No Country for Old Men) terrifyingly bad. Mr. McCarthy peoples his books with hit men and sociopaths, hicks and lowlifes, few of whom are little more than cartoonish stereotypes, not to mention his blood-drenched plots, the epitome of gratuitous violence for violence’s sake with precious little redeeming literary value.

Given all that, I had little hope for The Color of Night. I was pleasantly surprised to find, though, that the book is enjoyable. It was smoothly and creatively written; the plot hummed along; and the characters—in all their psychic frailty and moral depravity—were all fully sketched and believable. Even better, Mr. Bell took what could have been an irredeemably terrifying tale and made it into one in which fully flushed out characters act in ways that the reader can understand, even if they are often repugnant.

Mr. Bell tells the tale through the compelling voice of his main character, Mae—an emotionally damaged, violence-prone middle-aged woman looking back at her life. And it is a sad, painful life. Mae was abused for years, physically and sexually, by her sadistic older brother, abetted by their ineffectual parents. She runs away from her Ohio home, falls under the spell of pimps in Denver and California, with all that entails, and then becomes a wandering hippie chick in 1967’s Summer of Love in Haight Ashbury in San Francisco.

Almost inevitably, Mae comes under the spell of a charismatic sociopath Bell calls D, a Charles Manson-like character, and she promptly joins his drugs, sex and obedience cult. She submits to the D’s stoned-out whims, which involve sleeping with men of his choice and committing acts of violence, including a Sharon-Tate-like murder. All the while, Mae tries to cling to the one love of her life, a female fellow cult member.

Mr. Bell tells the story swimmingly well. This is a fast read with rapidly moving events that shift in time from Mae’s childhood and hippie-hood to her time as a Las Vegas card dealer and to her final quest after September 11, 2001, to avoid the FBI (which is closing in on her), and confront her one-time girlfriend, now a solid citizen in New York City.

Yes, there is intimately described violence aplenty in the book. But Mr. Bell handles it about as well as possible—with the exception of his depiction of Mae’s brother Terrell after he comes home from serving in the Vietnam War. Here Bell gives us little more than a screwed-up, violence-prone Vietnam vet stereotype. Terrell, as Mae puts it, “came home with a string of shriveled ears he kept inside the closet door where you’re supposed to hang your ties. Two Purple Hearts and a hard drug habit.”

It will come as no surprise that Terrell’s life comes to an early, ultra-violent end, one that involves his wife, children, and a SWAT team. The only positive thing to be said about the character of Terrell is that he was royally screwed up before he went to Vietnam, and so his clichéd post-war life feels a bit more plausible.

All in all a moving and compelling read.