The Color of Abolition: How a Printer, a Prophet, and a Contessa Moved a Nation 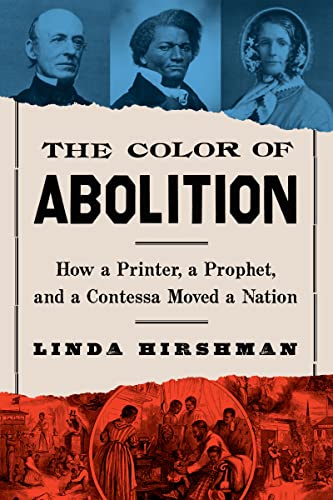 “The Color of Abolition proves an invaluable addition to abolitionist history, which has grown immeasurably richer in recent years.”

The Color of Abolition, by social movement historian Linda Hirshman, is a revealing new study of the tenuous personal relationships and political alliances that drove and divided the 19th century anti-slavery struggle’s powerful Boston Clique. It arrives in the wake of a handful of revelatory recent books on the complex and largely misunderstood racial dynamics of pre-Civil War abolitionism, the most transformative political movement in American history.

The traditional view of abolitionism has placed white reformers like William Lloyd Garrison, a pacifist champion of non-resistance and moral suasion, at the center of a struggle that began around 1830. This approach ignores the fact that Blacks had been mounting organized resistance to slavery since the time of the American Revolution and continued to do so even after the likes of Garrison and Wendell Philips started grabbing and generating most of the headlines. Manisha Sinha’s encyclopedic The Slave’s Cause: A History of Abolition (2016) reshapes our understanding of a long abolitionist movement with Black revolutionaries often at the center of the struggle.

Kellie Carter Jackson’s Force and Freedom: Black Abolitionists and the Politics of Violence (2019) challenged the Garrison-centric notion that apolitical non-resistance was the movement’s driving force, identifying Haitian revolutionary Toussaint L’Ouverture as the primary inspiration for Black resistance, and documenting the deep divisions in the movement between white reformers like Garrison, who believed moral suasion would turn the tide, and Black leaders like Henry Highland Garnet, who recognized that only revolutionary violence would get the job done.

Force and Freedom reads like a 19th century analog to We Will Shoot Back: Armed Resistance in the Mississippi Freedom Movement, Akinyele Umoja’s brain-rattling re-assessment of the civil rights movement that (along with the likes of Charles E. Cobb’s This Nonviolent Stuff’ll Get You Killed, Hasan Kwame Jeffries’ Bloody Lowndes, and Timothy B. Tyson’s Radio Free Dixie), shatter the liberal fantasy of nonviolence’s neat and tidy triumph.

In all of these renditions of the abolitionist struggle, one figure stands at the fulcrum of the movement and uneasily bridges the gap between its regional and political factions and philosophical divides: Frederick Douglass, the escaped slave and master orator who penned the definitive slave narrative, brought international attention to the abolitionist cause, and dedicated more than half a century to the Black freedom struggle in a career that continued for 30 years after the Civil War. David W. Blight’s Frederick Douglass: Prophet of Freedom (2018) provides the definitive take on the long, majestic, and tumultuous arc of Douglass’ life and work.

Perhaps the most compelling and intriguing slice of human drama at the heart of the abolitionist story concerns the rise and fall of Frederick Douglass’ and William Lloyd Garrison’s alliance, which proved enormously fruitful in advancing abolitionism but ended in an ugly (and public, by means of their respective newspapers) professional and personal divorce.

Hirshman’s The Color of Abolition sheds new light on the Garrison-Douglass relationship, the changes in Douglass’ perspective that precipitated its decline, and the larger context of factionalism within the abolitionist struggle. Hirshman does so in part by inserting a pivotal third party into the mix.

Subtitled How a Printer, a Prophet, and a Contessa Moved a Nation, The Color of Abolition places fresh and fascinating emphasis on Maria Weston Chapman (the titular “Contessa”), a talented, disciplined, and innovative organizer and fundraiser who brought solvency and stability to the Boston wing of the movement. Chapman also managed Douglass’ legendary 1845–6 lecture tour of Ireland and England, which heightened the movement’s international profile like nothing before it, and helped Douglass build a network of overseas contacts, such as Julia Griffiths, who would remain critical figures in his professional life for years to come.

A “beautiful, wealthy Bostonian from a prominent abolitionist family who de facto ran the [Anti-Slavery] Society office,” Chapman was, according to Hirshman, “perhaps Garrison’s closest comrade.” Chapman’s brash determination to position herself at the center of the Boston wing of the abolitionist struggle “opened up the possibility of an alliance interracial and sex-integrated at the very top—the first such major public movement in the history of the nation.”

However, Chapman’s view of Douglass, expressed in letters both to him and his handlers during his travels abroad, demonstrate how often anti-slavery and anti-racism failed to go hand in hand in the minds and hearts of white abolitionists. Repeatedly, she interprets Douglass’ inclination toward independent thought and action as the churlish misbehavior of an ungrateful, untrustworthy, lazy, and ungovernable servant. In one sense, Chapman’s views simply extended the discomfort that many white abolitionists felt with Douglass’ intellectual growth that began a few years earlier when the movement’s new star orator suggested that he had more to say than repeated retellings of his brutal years of enslavement.

According to Hirshman, Chapman’s condescending and insulting correspondence likely sowed Douglass’ first seeds of doubt about Garrison and his Boston Clique, both for his own personal and political development, and for his ability to serve a cause that he understood was broader and far more important than any single movement faction, philosophy, or strategy.

In addition to providing new insights on Douglass, Chapman, Garrison, and the inner workings of the Boston Clique, Hirshman does an excellent job of portraying the philosophical and tactical differences between Garrison’s organization and other branches of the movement. Garrison’s self-isolating abhorrence of politics eventually proved anathema to the more pragmatic Douglass.

Hirshman effectively characterizes other segments of the anti-slavery scene, ranging from Free Soilers and advocates of colonization to Henry Highland Garnet and the Black convention movement’s increasing push for violent resistance, to the radical and overtly political New York-based abolitionists who successfully courted Douglass when he broke with the Garrisonians. Hirshman describes New York abolitionist leader Gerrit Smith’s “unreserved outreach to Douglass” as “the very model of successful interracial cooperation.”

Hirshman’s portrayal of these divergent elements of the antislavery struggle and Douglass’ shift toward Garnet and Smith also plays out convincingly against the mounting drama of the country’s progression toward Civil War, particularly with such pivotal events as the Compromise of 1850 and that year’s savage Fugitive Slave Act.

Among all the compelling figures in The Color of Abolition—particularly the triumvirate at the book’s center—Douglass unsurprisingly stands tallest, especially as Hirshman recounts the evolution of his “hard-won strategy of skeptical cooperation with his powerful white allies.”

Most of all, the book illustrates how Douglass navigated that often-treacherous path, The Color of Abolition proves an invaluable addition to abolitionist history, which has grown immeasurably richer in recent years.